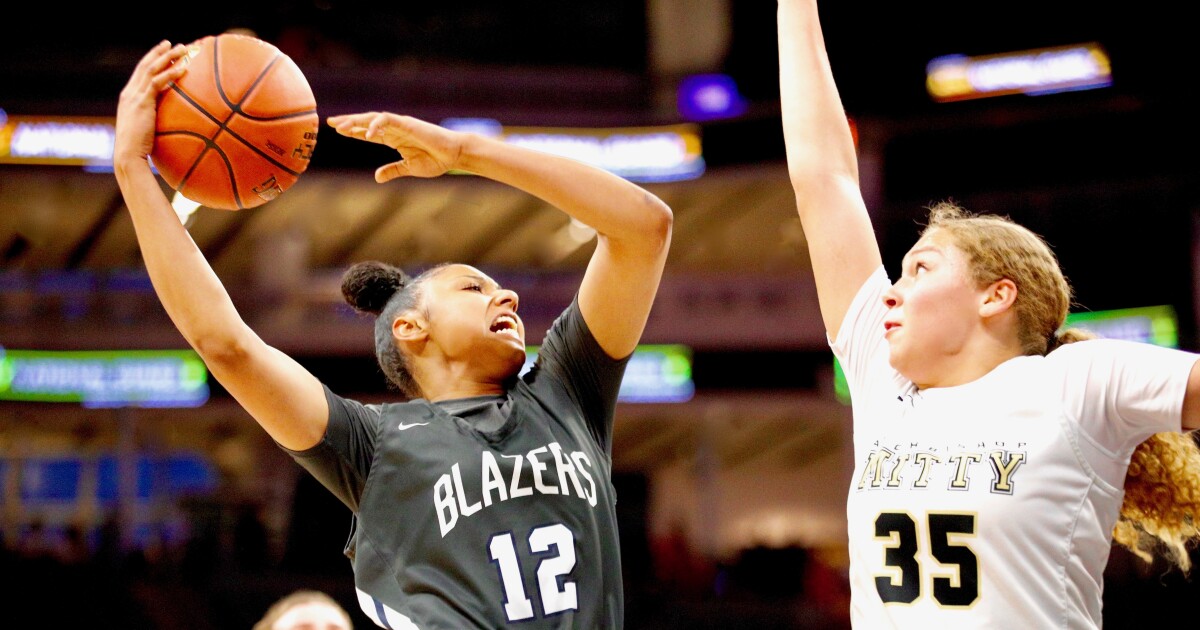 Having already vanquished the best opponents in Southern California, the Chatsworth Sierra Canyon girls’ basketball team took on the finest team Northern California had to offer and the Trailblazers left no doubt they are the best in the West this season, dominating San Jose Archbishop Mitty 85-61 in the Open Division state championship game Saturday at Golden 1 Center.

Not only is Sierra Canyon the best team, 6-foot-2 junior guard Juju Watkins made it crystal clear she is the best player in California, finishing with 23 points, 19 rebounds, six assists, six blocks and three steals in a performance her coach, Alicia Komaki, found hard to put into words.

Watkins, the Gatorade state player of the year and one of the top 2023 recruits in the country, had plenty of help from her friends.

Christy Reynoso buried all four of her three-point attempts on her way to 14 points, Mackenly Randolph had 13 points and 10 rebounds and Leia Edwards had 12 points, six rebounds and three assists as the Trailblazers (30-2) captured their fifth state title in 10 years under Komaki — the last two in the Open Division.

“We’re a really talented team, and Juju certainly accelerated our growth 1,000%,” Komaki said. “But we can all hoop a little bit!”

With her team well ahead in the final minute, Komaki subbed out her starters one by one so each could receive a well-deserved ovation from the Sierra Canyon fans who made the five-hour trip north.

“We came out here to win a state championship,” said Watkins, who transferred to Sierra Canyon after two seasons at Los Angeles Windward. “No fear… that’s our mindset. I had this goal a long time ago to play for a state championship, so this is truly a dream come true.”

While her counterpart might have been speechless about Watkins, Mitty coach Sue Phillips had plenty of praise to heap on the Trailblazers’ multi-faceted dynamo.

“We couldn’t stop them in transition, and when we did they got offensive rebounds. Juju is an incredibly gifted player,” said Phillips, who has led the Monarchs to six state titles in her 29 years at the helm. “I’m a math teacher, and after the first quarter I calculated we were on pace to give up 84 points, and I knew that isn’t good. As much as we tried, we couldn’t get Juju in foul trouble, and what makes her so tough is she can score at all three levels.”

Both teams got to the state final by avenging losses earlier in the season. Mitty (30-2) beat Concord Carondelet 72-63 after falling to the Cougars 61-50 in a tournament game Dec. 29, while Sierra Canyon beat previously unbeaten Etiwanda 60-51 to reverse a 69-57 defeat in the Southern Section final.

The Trailblazers avenged their only other loss with a 63-62 victory over La Jolla Country Day in the regional semifinals after having fallen to the Torreys 73-71 on a neutral court Jan. 8.

“We knew what our path would be once we lost to Etiwanda, and I’m incredibly proud of this group of girls,” Komaki said. “We knew our destiny was to go to La Jolla then Etiwanda and then Sacramento. I’m proud of how we bounced back from that loss in the section finals.”

Sierra Canyon opened a 41-27 advantage at halftime and held the lead for all but 29 seconds of the 32-minute game.

The Trailblazers made 10 of 20 shots from behind the arc and were 15 of 19 from the foul line.

Emily Eadie made a reverse layup with one minute left to give Newport Beach Sage Hill its first lead since the first quarter and made another to put the Lightning on top to stay before Isabel Gomez and Kat Righeimer made three of four free throws in the final seconds to clinch a dramatic 51-47 victory over Fresno San Joaquin Memorial in the state final.

Trailing by 13 points, Sage Hill clawed its way back to pull even at 33-33 when Gomez banked in a three-pointer to beat the shot clock with less than a minute left in the third quarter.

The Lightning (27-10) again fell behind in the fourth quarter, but showed resilience as they have throughout the playoffs to capture their first state title two weeks after losing to Orange Lutheran in the Southern Section Division 2A championship game.

“It was an exciting game to say the least … our girls are unbelievable,” Sage Hill coach Kerwin Walters said.

“When we play like that there’s not a team in the world we can’t compete with. We’ve been in these kind of games. We knew we can’t play teams that can’t push us, so we scheduled super tough teams and all those losses helped us grow.”

Denial of responsibility! TechiLive.in is an automatic aggregator around the global media. All the content are available free on Internet. We have just arranged it in one platform for educational purpose only. In each content, the hyperlink to the primary source is specified. All trademarks belong to their rightful owners, all materials to their authors. If you are the owner of the content and do not want us to publish your materials on our website, please contact us by email – [email protected]. The content will be deleted within 24 hours.
CanyoncrowndivisionGirlsJujuLeadsnews updateOpen
Share

Archana Puran Singh says her mom teases her about Kapil…