Notice: amp_is_available was called incorrectly. `amp_is_available()` (or `amp_is_request()`, formerly `is_amp_endpoint()`) was called too early and so it will not work properly. WordPress is currently doing the `pre_get_posts` hook. Calling this function before the `wp` action means it will not have access to `WP_Query` and the queried object to determine if it is an AMP response, thus neither the `amp_skip_post()` filter nor the AMP enabled toggle will be considered. It appears the theme with slug `publisher` is responsible; please contact the author. Please see Debugging in WordPress for more information. (This message was added in version 2.0.0.) in /home/runcloud/webapps/techilive/wp-includes/functions.php on line 5313
 Julianne Moore leaves nothing on the table in 'Lisey's Story.' It's not enough - TechiLive.in 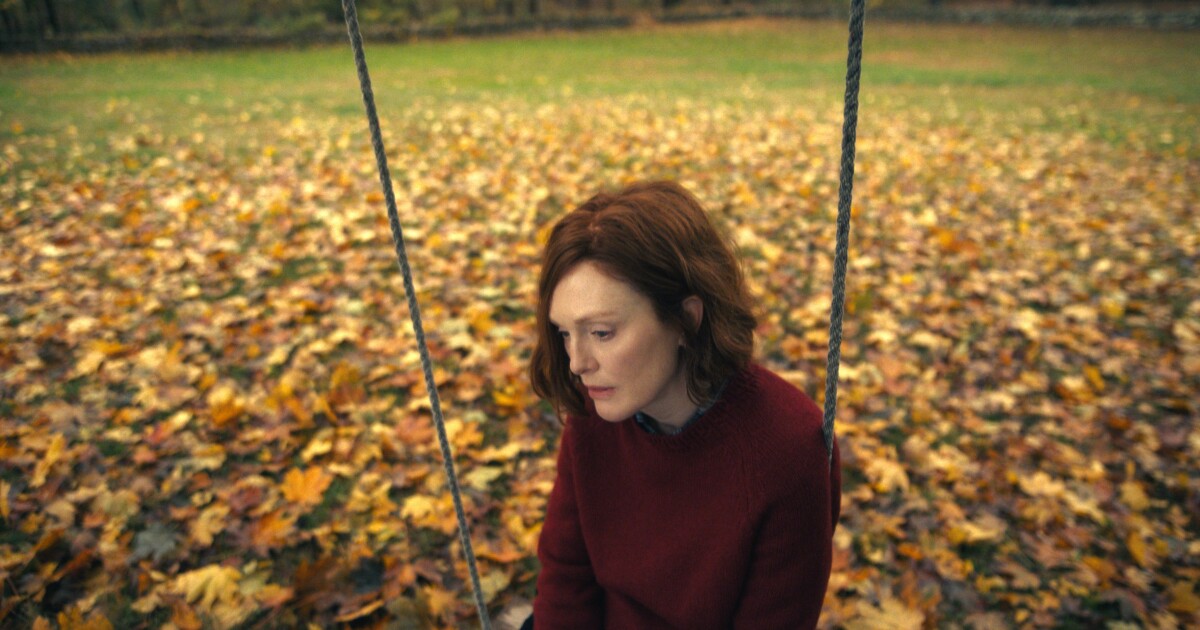 Julianne Moore leaves nothing on the table in ‘Lisey’s Story.’ It’s not enough

For the Apple TV+ miniseries “Lisey’s Story,” Stephen King has taken it upon himself to adapt what he has described as one of his own favorite books, the tale of a writer (dead, not quite departed) and the woman who loves him.

It’s an A-list cast. Clive Owen plays Scott, the writer, successful on par with King himself, but with a Pulitzer Prize and a National Book Award besides. He has been dead a couple of years when the story begins — the novel was partially inspired by King’s brushes with death — but will appear plenty, in flashbacks, dreams, visions and a sort of purgatory where much crucial action will take place, and in and out of which certain characters will travel with relative ease. Julianne Moore plays Lisey, Scott’s widow. Joan Allen is her sister Amanda, who has some psychological problems, and Jennifer Jason Leigh is her sister Darla, who doesn’t. Dane DeHaan plays the demented fan who drives one of two violent storylines; Michael Pitt is Scott’s father, who drives the other. Ron Cephas Jones plays an academic with an outsized sense of entitlement — another brand of misguided admirer. (The story plays in parts like a variation on the themes of King’s “Misery.” One imagines he has had plenty of experience of readers who thought he was sending them messages or stealing their thoughts, or owes them something for making them feel that they owe him something.)

Though King has stated his dislike of Stanley Kubrick‘s “The Shining,” “Lisey’s Story” seems to take cues from its pacing, composition and camerawork, with a similar emphasis on scenes that put a few bodies in a big space. In any case, it swings for something big and cinematic and artistic and deep, which you may take as a good plan or a bad one. It is the sort of work that some will find ineffably beautiful and others unbearably tiresome. Acknowledging its prettiness and production values, and some excellent performances, I found it better than unbearable but something less than beautiful.

Directed throughout by Chilean filmmaker Pablo Larrain (“Jackie” is one of his American films), it establishes an atmosphere of mournful dread from the first frame and rarely takes its foot off that pedal; it is spooky nearly all the time, even when characters are briefly enjoying themselves, which has the effect of undercutting the spookiness. And where the story on the page is full of King’s stream-of-consciousness quotidian asides — like the cost of a plastic bucket and where it was bought — that suggest the characters sometimes do normal things normally, the miniseries is nearly all peaks and valleys, agonies and ecstasies, with a mournful score and muted palette. It gets very dark — literally dark — at times; anyone who had difficulty with the final season of “Game of Thrones” is forewarned. (There is a lot of whispering too, and a bit of howling, so adjust your volume accordingly.)

King begins the novel, which is dedicated to his wife, author Tabitha King, with “To the public eye, the spouses of well-known writers are all but invisible.” Yet he gives Lisey little life of her own; she is an appurtenance, a helpmate, sometimes a savior to her well-known writer spouse, and a little bit of an action heroine, but without intellectual interests, or hobbies or even any sort of job of her own. (“From the first she felt interest coming from him… that she could hardly believe,” King writes, “because he’s so much smarter and so talented.”) She is not even arranging his papers, the MacGuffin that triggers the present-day plot and sets DeHaan’s obsessed psycho spinning. Notwithstanding Scott’s declaration, “You are every story,” among oft-repeated mutual pledges of love, she’s barely a muse.

This is true of the television version, but Moore, being the actress she is, gives Lisey presence and force — she goes all in, without going over the top. Indeed, the performers are committed from their head down to their toes, and if Owen fares less well as King’s quasi-stand-in, it is a less profitable role, in which he is regularly called upon to stare off into space, speak in the voice of his much younger self — a little boy growing up in a strange, haunted household — and speak for the author on matters creative: “Every poet, artist, storyteller, they go to the pool; it’s dangerous, but it also heals and renews, like the human imagination.” (The water motif — there are actual pools, ordinary and magic — is expanded upon here, with good effect, as a portal to Boo’ya Moon, the story’s other world.)

As the miniseries’ screenwriter, King — who can go on for pages relating what might easily be said in a paragraph — has done a good job of trimming scenes to their essence, and what he’s added tends to enlarge and clarify the narrative. That Leigh’s Darla has been given more to do here, closer to the action, is a happy change, as she is not afflicted with otherworldly heebie-jeebies or saddled with great pain or, for that matter, in thrall to some great love — but she is real and funny, in an eight-hour series in which almost nothing else is, and grounds the story whenever she shows up. DeHaan’s character has also been given new scenes to shore up his obsessiveness. Like the book, the telefilm is nonlinear and multi-planar, and it is not that too much happens, but that what happens happens slowly — which means the (very) violent parts play out at length — and that the story circles back upon itself. It can feel like a bit of a slog. Still, unless they are particularly attached to some excised minor characters and plot digressions, fans of the novel should appreciate the screen translation. Boo’ya Moon is nicely rendered — it has the feel of 19th-century fantasy paintings — and its monster more elaborately imagined than in the novel, which will only have you looking up the definition of “piebald.”

Denial of responsibility! TechiLive.in is an automatic aggregator around the global media. All the content are available free on Internet. We have just arranged it in one platform for educational purpose only. In each content, the hyperlink to the primary source is specified. All trademarks belong to their rightful owners, all materials to their authors. If you are the owner of the content and do not want us to publish your materials on our website, please contact us by email – admin@techilive.in. The content will be deleted within 24 hours.
Loading...
entertainment newsEntertainment updateJulianneleavesLiseysMoorenews updatestory
0
Share