Notice: amp_is_available was called incorrectly. `amp_is_available()` (or `amp_is_request()`, formerly `is_amp_endpoint()`) was called too early and so it will not work properly. WordPress is currently doing the `pre_get_posts` hook. Calling this function before the `wp` action means it will not have access to `WP_Query` and the queried object to determine if it is an AMP response, thus neither the `amp_skip_post()` filter nor the AMP enabled toggle will be considered. It appears the theme with slug `publisher` is responsible; please contact the author. Please see Debugging in WordPress for more information. (This message was added in version 2.0.0.) in /home/runcloud/webapps/techilive/wp-includes/functions.php on line 5313
 Just for laughs - TechiLive.in

Tamil cinema has a rich legacy of humor. As the online tributes for Vivekh keep pouring in, social media also props up clips from erstwhile comedians who are no longer with us mainly Nagesh. It’s a wonder that even in a movie like Panchathanthiram with an ensemble cast, Nagesh manages to score with his lines and his ‘no fuss’ acting. Comedy is perhaps the toughest round in the performance game and mastering that is an art privy to the innately talented.

Also, check out Nagesh’s ‘Alamel’ in Ooty Varai Uravu, where he calls his tough nurse-wife, Alamelu (Sachu) by shortening her name, but also lengthening the syllable to give it an octave high. It’s sheer genius. TS Balaiah (in all Sridhar films) and VK Ramamasamy (Mani Ratnam would have repeatedly cast him in the 80s) brought in humor with just their body language and presence.

No comedy column is complete without mentioning Crazy Mohan and his superhit films, a dozen or so, with Kamal Haasan. The fact that Nagesh is relevant to Gen Z is partly due to Kamal Haasan who cast him in many of his films until Dasavatharam. “Comedy is acting out optimism,” said Robin Williams, but Nagesh made a trend of drawing comedy out of his onscreen predicament.

This trend continued with Vadivelu (take his iconic character, Nesamani, from Friends or Murugesa in Chandramukhi). Vivekh’s key ‘performance roles’ were in Minnale, Dhill, Dhool, Run, Vaali and Thirumalai to name a few from the early millennium, and his role in both VIP films with Dhanush showed ‘sync and flow’ between both actors and was such a joy to watch that it brings up a wistful smile now. Vivekh also used his screen presence to ‘mimic’ social bias as well as key personalities. He did begin as a mimicry actor in K Balachander’s Pudhu Pudhu Arthangal in a role that caused his talent to shine. 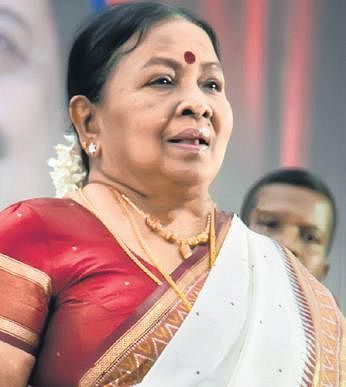 Santhanam who followed with dialogue-based humour, rose from television to films, and his iconic phrase ‘nanbendaa’ was perhaps instrumental in Boss Engira Bhaskaran being a super hit. Soori’s famous phrase, ‘Pushpa purushan, and his ‘pairing’ with Sivakarthikeyan stands him in good stead. And then, there is everyone’s favourite, Yogi Babu, who blends in seamlessly in star super hits like in that running English gag he does with Samantha and Vijay in Mersal). His hits (Kolamaavu Kokila earlier, and now, Mandela) tell us how important comedy is in Tamil films across genres. A performance of Yogi Babu’s that stands out is from the film, Aandavan Kattalai, in which he excels along with Vijay Sethupathy, who shows terrific propensity for enacting humor without much ado.

In women comedians, Manorama reigned, followed by Sachu and Kovai Sarala. Savitri was perhaps the sole heroine who could pull off a funny role with as much ease as any hero! Urvashi took over her mantle but comedy with women is mostly relegated to being comedy ‘on women’ (like body shaming), which should stop. For some comedians, the laughs lie in the punch lines. For some, it lies in the performance. But fundamentally, it all lies in the writing. Here’s to more laughs and more humour in our movies. We need the laughs now more than ever.

The writer is a content producer and an art curator

Loading...
Denial of responsibility! TechiLive.in is an automatic aggregator around the global media. All the content are available free on Internet. We have just arranged it in one platform for educational purpose only. In each content, the hyperlink to the primary source is specified. All trademarks belong to their rightful owners, all materials to their authors. If you are the owner of the content and do not want us to publish your materials on our website, please contact us by email – admin@techilive.in. The content will be deleted within 24 hours.
entertainment newsEntertainment updateLaughsnews updatetechi live
0
Share

How to Avoid Early Preterm Births?