Notice: amp_is_available was called incorrectly. `amp_is_available()` (or `amp_is_request()`, formerly `is_amp_endpoint()`) was called too early and so it will not work properly. WordPress is currently doing the `pre_get_posts` hook. Calling this function before the `wp` action means it will not have access to `WP_Query` and the queried object to determine if it is an AMP response, thus neither the `amp_skip_post()` filter nor the AMP enabled toggle will be considered. It appears the theme with slug `publisher` is responsible; please contact the author. Please see Debugging in WordPress for more information. (This message was added in version 2.0.0.) in /home/runcloud/webapps/techilive/wp-includes/functions.php on line 5313
 Justin Turner's homers, Dodgers' bullpen hold off Pirates - TechiLive.in 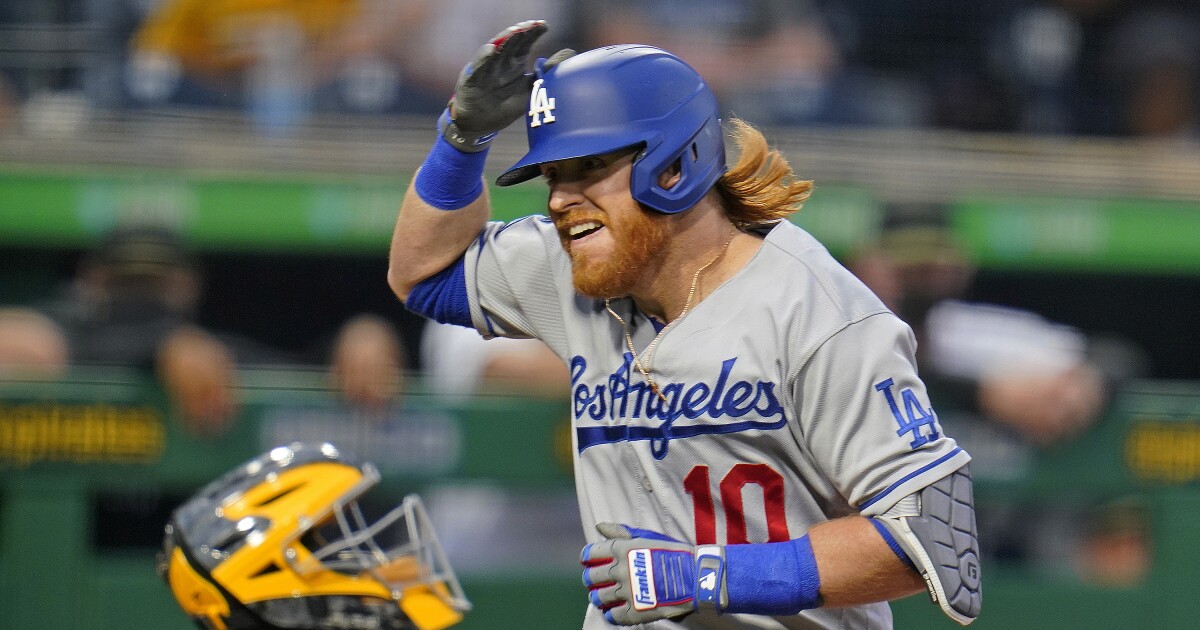 The plan for Tony Gonsolin’s season debut Wednesday was for the right-hander to pitch four or five innings, depending on his efficiency, and leave the Dodgers’ days of bullpen games behind them.

Gonsolin was activated to join the Dodgers’ starting rotation, giving them five starters for the first time since Dustin May blew out his elbow May 1. The Dodgers didn’t use a conventional starter four times over the next 32 games. Having Gonsolin eat innings should alleviate the bullpen’s workload and allow manager Dave Roberts to use relievers more aggressively on other days, indirectly curbing the other four starters’ workloads as the Dodgers see fit.

But Wednesday’s 2-1 win over the Pittsburgh Pirates at PNC Park turned into a bullpen game anyway. Gonsolin gave up a run in just 12/3 innings. He faced 12 batters, walked five, surrendered two hits and posted four strikeouts. He needed 66 pitches to secure the five outs.

“I gotta throw more strikes,” Gonsolin said. “I gotta figure it out.”

What could’ve been a disastrous night for the Dodgers (36-25) ended in victory because five relievers held the Pirates (23-37) scoreless over the final 71/3 innings, making Justin Turner’s two home runs enough for the Dodgers’ 12th straight win against the Pirates.

Turner entered the game 15 for 31 in his career against Pirates left-hander Tyler Anderson. He added to the staggering success with solo home runs in his first two at-bats, in the first and third innings. He finished the game three for five. The rest of the team went four for 29.

Kenley Jansen sealed the result, and a four-out save, by catching a line drive near his head off Ke’Bryan Hayes’ bat. The closer pounded his chest from the ground with a smile. It was Jansen’s 14th save of the season and second in two nights.

“That was fun,” Jansen said. “That was a quick rush. The adrenaline, everything.”

Gonsolin broke spring training as a reliever, but he didn’t appear in a game before he was placed on the injured list with a shoulder injury April 4. The Dodgers preferred to keep Jimmy Nelson, a former starter, in the bullpen. David Price, another former starter, was on the injury list. And they didn’t have an obvious replacement in the minors.

Josiah Gray, the organization’s top prospect, could have been the choice, but he’s been shelved since early May with a shoulder impingement after making one start for triple-A Oklahoma City.

So the Dodgers opted for bullpen days when needed — placing more of a burden on Trevor Bauer, Clayton Kershaw, Walker Buehler and Julio Urías — until Wednesday. The Dodgers didn’t yield more than three runs in any of those four games. Still, the strategy wasn’t sustainable. Gonsolin was welcomed after he posted a 2.31 ERA in 462/3 innings during the 2020 regular season.

His first appearance in a meaningful game since Game 6 of the World Series was delayed an hour and 10 minutes by a downpour. He took the mound in the first inning with a 1-0 lead after Turner’s first home run. He barely survived the frame.

Adam Frazier greeted him with a single. Two batters later, he issued a two-out walk to Colin Moran. Gregory Polanco then smashed a line drive at first baseman Albert Pujols. What should’ve been the third out bounced off his glove and into right field.

Second baseman Chris Taylor raced over to retrieve the ball and throw home as Bryan Reynolds ran home from second base. Taylor’s throw beat Reynolds, but catcher Will Smith left home plate exposed and Reynolds sneaked his foot in front of Smith’s glove.

Gonsolin then walked Kevin Newman, owner of the lowest on-base-plus-slugging percentage in the majors, to load the bases. He escaped the jam by striking out Michael Pérez with his 36th pitch.

Gonsolin struck out the first two hitters he faced in the second inning before losing command. He walked the next three batters, prompting Roberts to pull him.

“He just was erratic,” Roberts said. “He didn’t have command across the board.”

Victor González replaced Gonsolin and got Colin Moran to line out to end the inning.

Denial of responsibility! TechiLive.in is an automatic aggregator around the global media. All the content are available free on Internet. We have just arranged it in one platform for educational purpose only. In each content, the hyperlink to the primary source is specified. All trademarks belong to their rightful owners, all materials to their authors. If you are the owner of the content and do not want us to publish your materials on our website, please contact us by email – admin@techilive.in. The content will be deleted within 24 hours.
bullpenDodgersHoldhomersJustinnews updatePiratessports news
0
Share