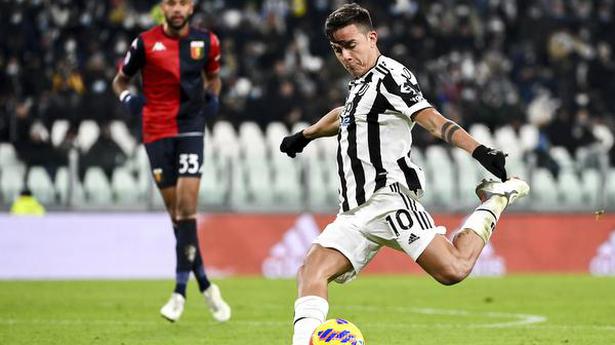 Juan Cuadrado and Paulo Dybala scored as Juventus eased to a 2-0 win over Andriy Shevchenko’s Genoa on Sunday to register its fourth victory in five Serie A games.

Cuadrado struck direct from a corner that sailed over the head of Genoa goalkeeper Salvatore Sirigu in the ninth minute, with Dybala drilling a second late on to send Juve up to fifth place.

The victory begins an important month for Massimiliano Allegri’s side which will hope a run of favourable fixtures can allow it to close the seven-point gap to the Champions League places.

Juve is 11 points adrift of leader AC Milan ahead of matches against Venezia, Bologna and Cagliari in the run up to Christmas and the winter break.

Genoa has won once in 16 games this term, picking up just one point in four outings since the appointment of former Ukraine and Milan star Shevchenko.

It has yet to score under the 2004 Ballon d’Or winner and did not attempt a single shot against Juve.

Ciro Immobile grabbed a pair of goals in Lazio’s 3-1 victory at Sampdoria.

Sergej Milinkovic-Savic swept Lazio ahead on seven minutes before Immobile squeezed in a scrappy second.

The Italy forward scored again before the break but Milinkovic-Savic was sent off in the second half and Manolo Gabbiadini netted a consolation for Sampdoria.

Denial of responsibility! TechiLive.in is an automatic aggregator around the global media. All the content are available free on Internet. We have just arranged it in one platform for educational purpose only. In each content, the hyperlink to the primary source is specified. All trademarks belong to their rightful owners, all materials to their authors. If you are the owner of the content and do not want us to publish your materials on our website, please contact us by email – [email protected]. The content will be deleted within 24 hours.
Andriy Shevchenkofootball fixturesfootball newsfootball resultsgenoaJuan CuadradoJuveJuventus
Share