Notice: amp_is_available was called incorrectly. `amp_is_available()` (or `amp_is_request()`, formerly `is_amp_endpoint()`) was called too early and so it will not work properly. WordPress is currently doing the `pre_get_posts` hook. Calling this function before the `wp` action means it will not have access to `WP_Query` and the queried object to determine if it is an AMP response, thus neither the `amp_skip_post()` filter nor the AMP enabled toggle will be considered. It appears the theme with slug `publisher` is responsible; please contact the author. Please see Debugging in WordPress for more information. (This message was added in version 2.0.0.) in /home/runcloud/webapps/techilive/wp-includes/functions.php on line 5313
 ‘Kala’ movie review: A mindless celebration of violence - TechiLive.in 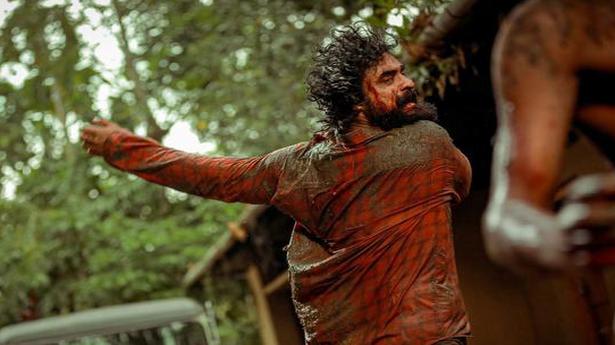 Vagueness is the hallmark of this Tovino Thomas-starrer all through, which leaves too much to our imagination

When a film advertises itself as ‘the feel-bad film of the year’, one is bound to feel thankful, having experienced an overdose of feel-goodness at the cinema in recent years. Yet, by the time ‘Kala’ (Weed) ends, one is left ruing the fact that the warning in that advertisement was not taken seriously, for it delivers what it promises.

At the center of it all is Shaji (Tovino Thomas), a man who revels in his masculinity and competes in ferocity with his pet dog of an exotic breed. He survives mostly on his father (Lal)’s money. We get enough hints that Shaji has already wasted quite a lot of it in unsuccessful ventures. The events in the film happen over the course of a day, when his father (Lal) is out for a medical checkup and wife (Divya Pillai) is away at her parents’ house. Alone in the house with a few workers who have been hired to harvest the vast arecanut plantation attached to the plot, Shaji comes face to face with someone who is out to seek revenge for an event from his past.

Rohith.V.S, who debuted with the quirky ‘Adventures of Omanakuttan’ and went on to do ‘Iblis’, returns with a film which is unlike his past works. In ‘Kala’, he has chosen to do a dark, violent drama, where just quite a lot of blood is spilled. While that consistent habit of experimentation is laudable, this work sorely lacks in substance and seems to yearn for appreciation for its technical output, most notably the fast cuts, which are overdone in some places, and the visuals.

In the initial half, the eerie background tone and visuals are used to create a sense of foreboding, even for scenes in which nothing really happens. Vagueness is the hallmark of the film all through. It is almost the opposite of some films which over-explain things and insult the audience’s intelligence. This vagueness can be seen in how the characters are written and in how the narrative plays out. Right from the exact reasons for the fear and mental pressure that Shaji’s wife talks about, to Shaji’s past, and the reasons for his peculiar nature are painted in broad strokes, leaving too much to our imagination.

Much of the attention instead is invested in the action sequences, which fills up almost the entire second half of the film. While some of the raw action does thrill us initially, the novelty soon wears off as the two men get involved in a mortal combat, almost reminiscent of the popular old computer game. The underlying theme of the story seems to be the fightback of the oppressed and the downtrodden against the ones who have pillaged their lands and inflicted extreme cruelty on them. Yet, that theme is somehow lost in what is a celebration of mindless violence, and ironically of masculinity.

Kala is currently running in theatres

Denial of responsibility! TechiLive.in is an automatic aggregator around the global media. All the content are available free on Internet. We have just arranged it in one platform for educational purpose only. In each content, the hyperlink to the primary source is specified. All trademarks belong to their rightful owners, all materials to their authors. If you are the owner of the content and do not want us to publish your materials on our website, please contact us by email – admin@techilive.in. The content will be deleted within 24 hours.
Celebrationdivya pillaientertainment newsEntertainment updateKalakala 2021kala malayalam filmKala Movie Review
0
Share

India Post Recruitment: Apply for 4368 GDS posts in Bihar, Maharashtra by May 26

Data from smartwatches can help predict clinical blood test results: Long-term data gathered from wearables can quicky indicate illness and other abnormalities in a patient’s health