Notice: amp_is_available was called incorrectly. `amp_is_available()` (or `amp_is_request()`, formerly `is_amp_endpoint()`) was called too early and so it will not work properly. WordPress is currently doing the `pre_get_posts` hook. Calling this function before the `wp` action means it will not have access to `WP_Query` and the queried object to determine if it is an AMP response, thus neither the `amp_skip_post()` filter nor the AMP enabled toggle will be considered. It appears the theme with slug `publisher` is responsible; please contact the author. Please see Debugging in WordPress for more information. (This message was added in version 2.0.0.) in /home/runcloud/webapps/techilive/wp-includes/functions.php on line 5313
 ‘Karnan’ movie review: Dhanush and Lal make a fantastic pair in a film that resists, rises and revolts - TechiLive.in 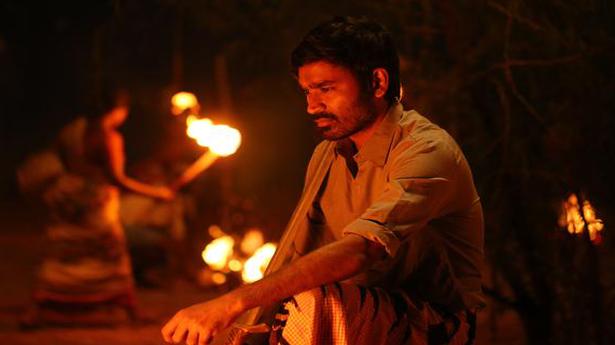 ‘Karnan’ movie review: Dhanush and Lal make a fantastic pair in a film that resists, rises and revolts

Mari Selvaraj’s follow-up to ‘Pariyerum Perumal’ is even more assertive, even more aggressive, and twice as painful to watch and introspect

Deities seem to have given up on Podiyamkulam near Melur, Madurai, the place where Dalits have been ‘allowed’ a pocket of land in a hamlet; it is where Mari Selvaraj’s Karnan is set and the inhabitants are the people who have resisted systematic oppression the most. More than giving up, it appears the deities are tired and worn out. It is another thing that the people of Podiyamkulam never die — at least in their unified spirit against oppression. They become a small deity in face of death.

Karnan, in fact, opens with the death of a young girl succumbing to epilepsy on a main road, with buses and cars on either side. Nobody stops and she ends up looking like a run over dog on the highway, from a top angle. When the camera zooms on her, Mari Selvaraj resists showing her face; she gets a deity’s facade instead. Even the deities that people of Podiyamkulam pray to are faceless, or rather without a head.

It is just fascinating that Karnan begins with this faceless aspect, with a series of staccato images of faces that communicate anger, despair, hope and longing. It is even more fascinating that ‘Kanda Vara Sollunga’, which, on the face of it, might appear like a hero-introduction song, but, in essence, is about the call (or cry) of a deity for the arrival of a warrior to defend.

And how apt that we see Karnan (Dhanush) with his face covered and being dragged to prison. It is another thing that we don’t actually see the face of Karnan, but his feisty portrait on a wall drawn using a torch — an implication that deities have chosen Karnan to carry out the task, if you pay attention to the lyrics of ‘Uttradheenga Yeppov’. He is the face of people.

Mari Selvaraj uses Nature as a powerful tool to narrate and understand his people. Their everyday interaction with pigs, piglets, eagle, pigeons, native dogs, a horse and an elephant, paint a larger picture of a quaint, normal life. At the same time, Selvaraj treats their existence in a metaphorical fashion — like when a fish hook is used as an allegory in the latter half, or when an eagle poaches on a chick raised by a family, which could again be taken as an allegory on caste violence.

There is a recurring image in Karnan that freezes on people’s feet; sometimes it shows them barefooted, sometimes with chappals; the wrinkles tell a story about each of them and where they come from. A parallel to their caged-life could be drawn from the image of a donkey with legs tied, to ensure he doesn’t run away — or break free. Caste ties their hands and feet together.

The older people of the village are not susceptible to change; they want to resist and survive, while the younger generation wants to break out and fight back for what has been denied for generations. If Pariyerum Perumal showed how caste played a role in educational institutions, Karnan shows how deep-rooted it is for claiming what is bare minimum — in this case, a bus stop at their village (“There is no stop for people living in the forest,” says a character).

What was handled in a subliminal way in Karnan (1964) and what Mani Ratnam’s Thalapathi refused to shed light on, is the central conflict of Mari Selvaraj’s Karnan: caste and the ensuing violence on Dalits. But unlike the previous two films, there is no antagonist in the traditional sense. The system of power and dominance is the enemy.

The film works both ways: an uprising drama and a lyrical re-interpretation of Karnan, the warrior character from The Mahabharata. Like Anand Neelakantan’s Ajaya, Mari Selvaraj inverts the gaze to tell the story of Karnan from the point of view of the oppressed. The parallels don’t stop with the character names. A sword is won by Karnan during a ritual sacrifice which becomes both his weapon and shield. There are at least four silhouette shots with the Sun by Karnan’s side. At one point, Kannabiran (Natty), a police inspector, mocks the village head who is named after Duryodhana. You could argue that the film is rather a war between power and powerless.

Karnan is a long film and runs for close to 160 minutes. Some people might have an issue with the pacing in the first half, wherein Selvaraj captures and celebrates everyday life. In that sense, it is about “livelihood” and not “lifestyle”. The film’s weakest are the romance portions with Draupadi (Rajisha Vijayan) that might seem out of place, but it redeems itself with the way women characters are written, particularly Karnan’s sister Padmini (an excellent Lakshmi Priyaa Chandramouli) and his mother. Lal plays Karnan’s grandfather, Yaeman, who is the middleman between the past and future. The dynamics he shares with Dhanush bring about a certain lightness and an earthly quality. The rest of the cast are brilliant, especially Poo Ramasamy…there could be no greater politics than the silence of Poo Ramasamy in the characters he breathes life into.

Mari Selvaraj is, of course, angry. But he channels all that built-up rage into making a powerful piece of art. He seems to be at much more ease about his craft now. Right after Pariyerum Perumal, there was criticism of Selvaraj dumbing down the movement spearheaded by Pa Ranjith. In Pariyerum Perumal, the message was: “Until you change, nothing is going to change.” But with Karnan, the message seems to be even more clear: “It doesn’t matter if you change, we won’t.”

Karnan is currently running in theatres

Denial of responsibility! TechiLive.in is an automatic aggregator around the global media. All the content are available free on Internet. We have just arranged it in one platform for educational purpose only. In each content, the hyperlink to the primary source is specified. All trademarks belong to their rightful owners, all materials to their authors. If you are the owner of the content and do not want us to publish your materials on our website, please contact us by email – admin@techilive.in. The content will be deleted within 24 hours.
Loading...
dhanushdhanush movieentertainment newsEntertainment updateFantasticFilmKarnanKarnan Movie Review
0
Share