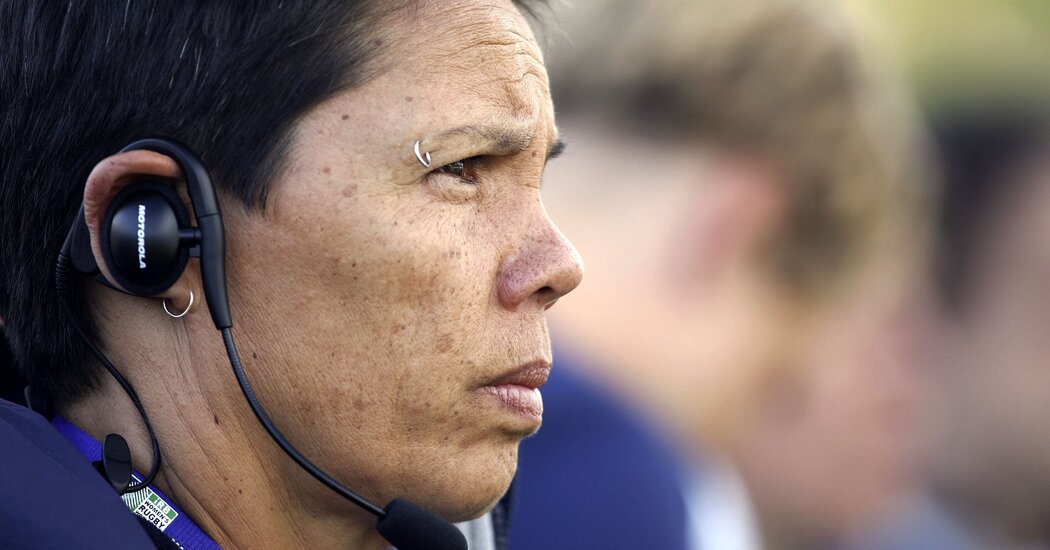 The 1991 Women’s Rugby World Cup came down to a face-off between the brash but underdog Americans and the established England team, the product of a long British tradition in the sport.

But it was the United States team that won the final, in Cardiff Arms Park in Wales, capturing what came to be considered the first major world championship ever played in women’s rugby.

Kathy Flores wore No. 8 for the Americans, handling a key position at the center of the field.

Over her 40-year career in the sport, Flores helped bring about some of the formative events of U.S. rugby history. She captained the USA Women’s Rugby Team in 1987 and coached the same team from 2003 to 2010, returning with it to the women’s rugby World Cup in 2006 and 2010. And from 2014 until Oct. 21, when she died of colon cancer at 66 in Providence, R.I., she was the coach of Brown University’s Division I women’s rugby team. The J.F. Skeffington Funeral Home in Providence reported her death in an obituary.

Flores’s legacy as a coach was one of inclusion. She pushed for more support for women’s rugby, telling The Associated Press in 2010 that “women have always wanted to be physical, but they haven’t had the opportunity.”

She also coached the San Francisco Fog, an LGBTQ rugby team, and played for and later coached the Berkeley All Blues, a Bay Area semiprofessional team, winning 11 league championships from 1994 to 2010.

“I love the sport, and I want to expose as many people to it as I can, particularly young women,” Flores told The Bay Area Reporter in 2013. “It’s important for their confidence and self-esteem.”

“With college girls, after playing rugby, they start thinking better of themselves and realize what they can do better,” she said. “You see them walk into interviews differently. Working with gay men, I see the same things. After playing a little bit of sports, there’s a whole change in how they see themselves, kind of like a flower blooming.”

Flores often received a meager salary for playing or coaching rugby, and she recalled in a 2017 interview with the BBC that a majority of the players on the 1991 national team had held jobs to support themselves and often lost them when they traveled to compete.

Women’s rugby at the national level has historically been underfunded and under-promoted in comparison with the men’s game, she said in a 2011 interview with the blog Rugby Wrap Up.

When asked about her desire to continue coaching World Cup teams, said she was unsure given the inadequate funding. “It’s lip service to say the women get support when our Eagles have to do raffles and sell last World Cup’s gear to raise money,” she said. “Next it will be bake sales. Are the men are doing this too?”

Women’s rugby has long had to fend for itself. The 1991 World Cup was organized not by the International Rugby Board, the sport’s governing body, but by four players from the Richmond Women’s Rugby Club in Britain. They wrote to national teams, booked fields for the matches and raised money to cover costs.

The Rugby Board, now called World Rugby, acknowledged the legitimacy of the tournament in 2009, when, in a news release, it listed the U.S. Women’s National Team as 1991 champions.

The Americans won that 1991 final game, 19-6, before 3,000 fans, whose mere presence was nerve-racking, Flores said in the BBC interview. “Just, you know, having people watching us was something different,” she said.

The game was a triumph of athletic prowess over the long experience of European rugby teams. “They obviously may have understood the strategy of the game a bit better than we did having grown up with it,” Flores told scrumhalfconnection.com, a women’s rugby website, “but our fitness and mobility between our fast backs and forwards outlasted them.”

But she said that American rugby officials had failed to capitalize on the team’s success. “They didn’t really promote it as you could have,” she said.

Kathleen Theresa Flores was born on Feb. 7, 1955, in Philadelphia to Catharine (Miles) and Joseph Flores. She graduated from Monmouth Regional High School in New Jersey and attended East Stroudsburg University in Pennsylvania, earning a bachelor’s degree in physical education.

She went on to Florida State University for a master’s degree in exercise physiology and began playing rugby there at 23. (Information on her survivors was not available.)

Zyana Thomas, a senior at Brown and a women’s rugby player who wears No. 8, as Flores did, said in an interview that Flores, who was of Filipino and Hawaiian descent, supported players of color in particular. And when Thomas experienced homelessness in college, she said, Flores gave her a place to stay.

Last year, the position of women’s rugby coach at Brown, through a donation, was endowed in her name.

Denial of responsibility! TechiLive.in is an automatic aggregator around the global media. All the content are available free on Internet. We have just arranged it in one platform for educational purpose only. In each content, the hyperlink to the primary source is specified. All trademarks belong to their rightful owners, all materials to their authors. If you are the owner of the content and do not want us to publish your materials on our website, please contact us by email – [email protected]. The content will be deleted within 24 hours.
CoachDiesFloresKathynews updatePathbreakingRugbysports news
Share