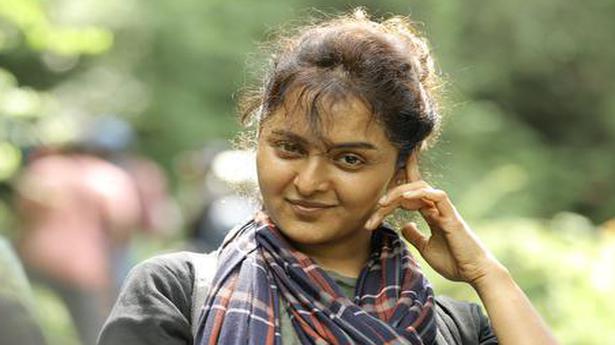 Malayalam film ‘Kayattam’, starring Manju Warrier, was shot on an iPhone and carries forward the filmmaker’s exploration of themes such as illusion and divine power

Filmmaker Sanal Kumar Sasidharan is on cloud nine after his movie, Kayattam, won the first ‘Disruptor in Cinema’ award at the Indian Film Festival of Melbourne. “It comes as a shot in the arm,” he says. “We had to take many risks to shoot Kayattam the way I had conceptualised it. However, because of the pandemic, we were unable to screen it in theatres or promote it the way we would have liked to. This award is definitely a morale booster and an honour.”

Sasidharan with his ‘Disruptor in Cinema’ award

Both the jury and viewers were impressed by the way the film — nominated for the Kim Ji-seok Award at 2020’s Busan Film Festival and screened in the Malayalam Cinema Today section of the International Film Festival of Kerala — moves away from a conventional narrative to explore philosophical aspects of the quest for happiness and identity in a surrealistic manner.

A seamless fusion of fantasy and fact, Kayattam, starring Manju Warrier (as Maya), was shot completely on an iPhone XS Max. And with the pristine wilderness of the Himalayas as its backdrop, it explores the male gaze, voyeurism, identity, and ego through a group of strangers trekking in the snow-covered mountains. As the trip progresses, the trekkers’ personalities unravel, their insecurities surface, and their egos take a beating.

Sanal Kumar Sasidharan and Chandru Selvaraj on the location of ‘Kayattam’

Sasidharan says the theme demanded a location like the Himalayas, but the terrain also made it difficult to shoot with a large team. “The weather kept changing every hour. Rain and snow would be followed by weak sunshine. Our location was so remote that we had to trek for an hour with our equipment to reach the place,” he recalls. “Since we have the technology to shoot with minimal equipment, we decided to tap its potential and work with an iPhone. Our cinematographer, Chandru Selvaraj, did a great job in framing the story,” he says.

They used a video camera stabiliser cage filmmaking rig to shoot. “Even in inclement weather, we were able to capture panoramic shots and close-ups with the phone. Most smartphones have an inbuilt stabiliser and it is possible to attach mics to it. Many films are shot with phones and I am happy with the way Kayattam shaped up,” he adds.

Manju Warrier in a still from Sanal Kumar Sasidharan’s ‘Kayattam’

This is Sasidharan’s third film to be shot in the Himalayas. “Kayattam explores the philosophical theme of maya [illusion] and brahmam [divine power]. It is a sort of extension of my first film [Oraalppokkam, whose heroine was also named Maya] to understand the mysticism of ‘maya’ and what we think is reality,” he says, adding that the film could be seen as the journey of life — when people meet as strangers and then find themselves in different kinds of relationships on their search for identity and happiness. “It assumes significance because of the violent times we live in, when every event is viewed through a narrow perspective of selfish interests. We experience happiness, and unhappiness, when we fail to understand that what is happening is maya.”

Not one to believe in bound scripts — he has often talked about having just an outline ready, with perhaps 15 pages in all — he prefers to let a film flow with the situation and the location. It was the same with Kayattam. When the cast and crew were marooned in a remote village after a landslip, cinematographer Selvaraj was able to capture the destructive face of nature and its aftermath.

On the set of ‘Kayattam’ in the Himalayas

Interestingly, the team also developed a new language for the film, A’hr Samsa — to ‘vocalise’ subtext in the film that could be unfathomable. “I made it to convey the idea of a group of people who had moved beyond the emotions of joy and sorrow. They travelled without any kind of baggage, emotional or physical,” he says. The song ‘Isthko’, composed by Sasidharan in A’hr Samsa and sung by Warrier, was released on Saturday.

Himalayas to the forest

Currently, Sasidharan is working on new scripts and the post production of his Tovino Thomas-starrer, Vazhakku. Co-produced by Thomas, the film — shot in Erumeli and Perumbavoor, in Kerala, and co-starring Kani Kusurthi and Sudev Nair — explores once again the theme of an individual and his interactions with the world.

“Tovino and I have been speaking for some time and he was keen on working on a project with me. That is how we got together for Vazhakku, which was shot in a forest,” Sasidharan concludes.

Loading...
Denial of responsibility! TechiLive.in is an automatic aggregator around the global media. All the content are available free on Internet. We have just arranged it in one platform for educational purpose only. In each content, the hyperlink to the primary source is specified. All trademarks belong to their rightful owners, all materials to their authors. If you are the owner of the content and do not want us to publish your materials on our website, please contact us by email – [email protected]. The content will be deleted within 24 hours.
A’hr SamsaawardBusan Film FestivalChandru SelvarajCinemaCinematographerDisruptorDisruptor in Cinema
Share