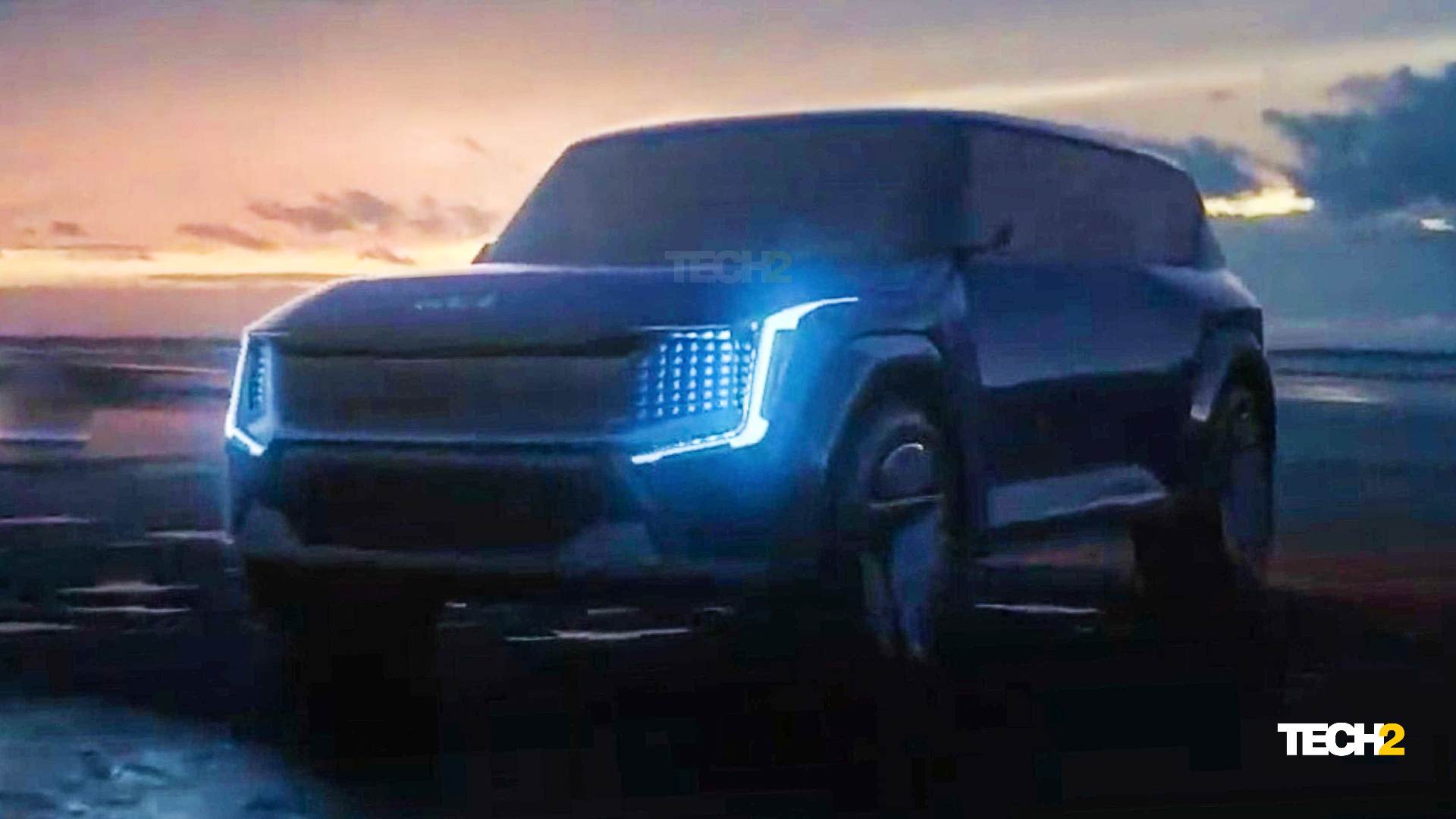 Ahead of its world premiere in the coming days, Kia has shared glimpses of its latest all-electric concept, the Kia EV9 SUV. Said to follow in the footsteps of the Kia EV6 crossover, the Kia EV9 – which will debut at the Los Angeles Auto Show on 17 November – is every bit the muscular, square-jawed SUV that the original teaser hinted at. While Kia has shared nothing more than a few shadowy images and design sketches, it’s clear that with the EV9, boxy is in.

Said to be inspired by the ‘contrasts of nature’, the EV9, with its upright proportions, squared-off front-end and block-like body is in the mould of some iconic burly SUVs and will appeal to fans of this body style. It features slim, L-shaped LED lights up front, and next to them are tiny circular daytime running lights integrated into perforations in the otherwise sealed-off front-end. The EV9’s muscular wheel arches are visible, as are its blacked-out pillars (lending the ‘floating roof’ effect), its large glass roof and thin LED tail-lights. The design sketch of the EV9’s interior provides a look at the funky steering wheel and an ultra-wide screen that combines the digital driver display and the touchscreen infotainment system as the highlights in an otherwise minimalistic SUV. Karim Habib, head of design at Kia, spoke about using recycled fish nets for the EV9’s flooring, and its seat fabrics utilising recycled plastic bottles and wool fibre. The EV9 will only have vegan leather on the inside, and Habib even went on to say the company is working to phase out the use of leather in its vehicles going forward. Kia has refrained from sharing any other details at this point, but by now, it’s clear the EV9 will be based on the same E-GMP architecture as the Hyundai Seven concept, which will also make its world premiere in LA on the same day. Like other models based on this platform, the production version of the Kia EV9 is likely to have a large lithium-ion battery (close to 100 kWh in capacity), single- and dual-motor options and a range of up to 500 kilometres on a full charge.

Expect the production version of the Kia EV9 concept to debut sometime in 2023.

Denial of responsibility! TechiLive.in is an automatic aggregator around the global media. All the content are available free on Internet. We have just arranged it in one platform for educational purpose only. In each content, the hyperlink to the primary source is specified. All trademarks belong to their rightful owners, all materials to their authors. If you are the owner of the content and do not want us to publish your materials on our website, please contact us by email – [email protected]. The content will be deleted within 24 hours.
aheadAutoconceptdebutelectricEV9Firstpostgadget update
Share

What to Do With a Multimillion-Dollar Megamansion? They Have Some Ideas.