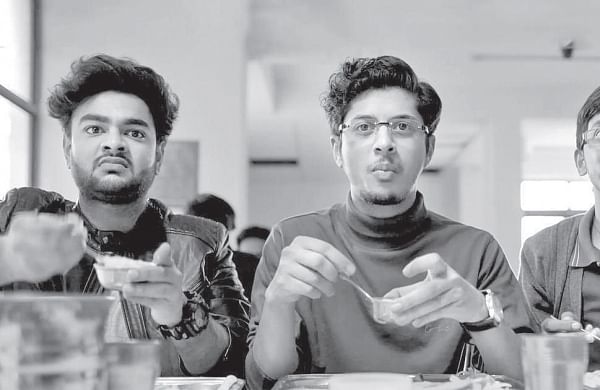 ‘Kota Factory’: For the young & the ambitious

When the opening season of TVF-produced Kota Factory first arrived on YouTube in 2019, nobody knew that a black-and-white series about the dull and dreary lives of young students preparing for IIT-JEE in Kota, Rajasthan, would become so popular among the youth. Global OTT giant Netflix acquired the show. Now, its much-awaited second season has started streaming, with the promise of a season 3. The Viral Fever, abbreviated to TVF, an OTT platform and YouTube channel, is cashing in on its popularity among India’s young and aspirational class. According to a June report, six out of 10 top Indian shows on IMDb are from TVF.

Ever since its inception about 11 years ago, TVF has consistently created content that appeals to the young audiences, especially their ambitious streak. Founder Arunabh Kumar, an IIT-Kharagpur alumnus, launched TVF to reach out to the younger generation who hardly watched TV entertainment.

The success journey began with one of their early shows Pitchers (2015) about four friends quitting their jobs to start their own company. It was released around the time of start-up boom in India and became the highest-rated Indian web series. Kumar, creator of Kota Factory, Aspirants and Pitchers, believes that the positivity of the shows works in their favour. “We as a brand stand for stories for the young India which wants to dream big and be better. That’s why we choose such subjects,” he says. According to actor Sachin Vidrohi of Kota Factory, TVF characters are “relatable”. “As a viewer, one feels it’s one’s own story,” he says.  Aspirants follows the lives of civil service contenders from West Delhi’s Rajendra Nagar—one of the popular coaching hubs for UPSC exams in the Capital.

Veteran actor Gajraj Rao believes his work with the content giant has given him a strong foot-hold in the industry. “The trust and acceptance that actors like me and Jitendra (Jitendra Kumar is in Pitchers, Kota Factory and Panchayat) enjoy in the industry can easily be credited to the work that we have done with TVF,” says Rao. His successful show with TVF A Day with RD Sharma (2016) pays tribute to the unseen author of famous Maths textbooks and there’s the hit comedy show Tech Conversations with Dad (2018). “Today, I get approached by writers with roles that are written for me,” says Rao who compares the success of TVF to that of Saturday Night Live in the US back in the 1970s.

Their first web series was Permanent Roomates in 2014 and the show immediately filled the vacuum felt by viewers who were looking for some fresh content beyond reality television and saas-bahu soaps. Actors who have worked with TVF attribute their success to various reasons. For one, they have identified how to reach out to the youth. Then their democratic working style, which brings new scripts to the table. Sunny Hinduja from Aspirants, says: “Their shows are backed by extensive research.” Not to mention that everyone in TVF is open to give inputs. “Your views will get equal importance regardless of whether you are a trainee or an experienced director. It makes their content relevant,” he adds.

According to Chandan Kumar, scriptwriter of Panchayat, realism sells. “Often young graduates are not too happy with their initial job offers. There is an urge to do something better. Also peer pressure where they have to crack exams such as CAT, UPSC, GATE, or GMAT. The success rate is not high. So as a writer of a show like Panchayat, a major challenge is to make the characters and their situation as realistic as possible. So you are always trying to crack that code,” explains Kumar.

Cinematic craft is another high point. Raghav Subbu, director of Kota Factory decided to make the show in black and white during pre-production. “There have been a lot of young adult shows where everyone is having fun all the time. While I am not saying that such things don’t happen, students in Kota just don’t have that luxury and that should reflect in the show. That struggle was one of the many reasons to make Kota Factory in black and white,” Subbu says. No wonder, there are reasons galore that make TVF a talent factory.

Denial of responsibility! TechiLive.in is an automatic aggregator around the global media. All the content are available free on Internet. We have just arranged it in one platform for educational purpose only. In each content, the hyperlink to the primary source is specified. All trademarks belong to their rightful owners, all materials to their authors. If you are the owner of the content and do not want us to publish your materials on our website, please contact us by email – [email protected]. The content will be deleted within 24 hours.
ambitiousentertainment newsEntertainment updateFactoryKotakota factorynews updatetechi live
Share

How to Nurture Your Leads and Create the Right Customer Journey

‘Chasing the Light’ book review: Chronicles of the real and reel