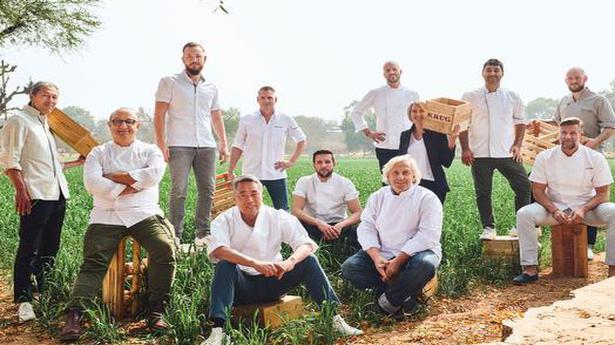 There’s a symmetry at the heart of Krug’s annual Chef Encounters trips, which bring together their cellar master (chef de cave) and chef ambassadors (ambassades). Each trip focusses on a single ingredient and the chefs use their imagination to create dishes that elevate the simple into something striking — all to be paired with the Krug Grand Cuvée and Krug Rosé. In 2018, they travelled to Mallorca where fish was the focus. 2019 saw Oaxaca and its piquant pepper taking centrestage. Last year, just before the pandemic put an end to international travel, 11 chefs visited India, specifically Jaipur, to celebrate the humble onion.

Julie Cavil, Krug’s new chef de cave (she took on the role early last year) explains that each excursion is similar to the maison’s Champagne-making philosophy, of “paying close attention to the vineyard’s character” and of “respecting the individuality of each plot and its wine” so as to allow each year’s cuvée to shine.

2020’s epicurean getaway — with names such as Tristin Farmer, executive head chef of Michelin two-star Singapore restaurant Zén, and Hiroyuki Kanda, owner-chef of Michelin three-star restaurant, Kanda, in Tokyo — had an Indian in the ranks. Chef Prateek Sadhu, the chef-partner at Mumbai’s Masque restaurant, is the first Indian chef ambassade for Krug. “Obviously, it was a huge honour. It was so humbling just to be around all these amazing and great chefs,” he exclaims, recalling celebrating Holi in Samode, eating dal baati churma in Jaipur’s street stalls and enjoying flutes of Krug Grande Cuvée in the midst of onion fields. His restaurant is one of the few in India to serve Krug.

Given its price tag (₹21,462 for a bottle of Grand Cuvée in Mumbai), Krug is a niche product. Moët and Chandon, which retails for about ₹8,163 (in Mumbai), is the front-runner in India’s Champagne market.

Distributors share that the bubbly hasn’t seen the kind of growth that other segments such as spirits and beers have over the last couple of years, because every bottle, with its attendant taxes, has to be imported. As a result, Krug is targeted at HNWIs (high net worth individuals) who are willing to pay for quality.

However, Sadhu, says the maison’s offerings are a great fit for Indian food. By avoiding malolactic fermentation (MLF) in which the tart malic acid, naturally present in freshly-crushed grape juice, is converted to a softer-tasting lactic acid, the final pour still tastes fresh and vibrant. And therefore “pairs well with the food that we serve at Masque, where the flavours are very Indian”.

Meanwhile, for the brand at large, 2020 was about moving online. Cavil says, “Last year, we quickly adapted to the situation with digital experiences called Krug Connect, which allowed us to continue to host events and reach out to our network of Krug Lovers while respecting social distancing. We also worked closely with chef partners to create videos, tutorials and social media takeovers so people could get to know the chefs while also having a more inspiring culinary experience at home.”

Ultimately though, it is the onion that created the best memories. Ambassade Angus McIntosh Jr, executive chef of The Farm at Brush Creek Ranch (Saratoga, Wyoming) remembers how his father would smell of onions when he would hug him after work. “To this day, the scent comes back to me every time I come into the kitchen and put on my apron,” he says. For Sicilian chef Ciccio Sultana, the allium brings a moment of self-identification. “I like to think I identify with the onion. My homeopath even tells me I share its sulphurous character; I like to lead but I do it with love to create an environment where people enjoy what they do rather than follow orders,” he concludes.

Denial of responsibility! TechiLive.in is an automatic aggregator around the global media. All the content are available free on Internet. We have just arranged it in one platform for educational purpose only. In each content, the hyperlink to the primary source is specified. All trademarks belong to their rightful owners, all materials to their authors. If you are the owner of the content and do not want us to publish your materials on our website, please contact us by email – [email protected]. The content will be deleted within 24 hours.
Loading...
cellar masterChampagneChefchef de caveChef EncountersChroniclesHiroyuki KandaJulie Cavil
0
Share