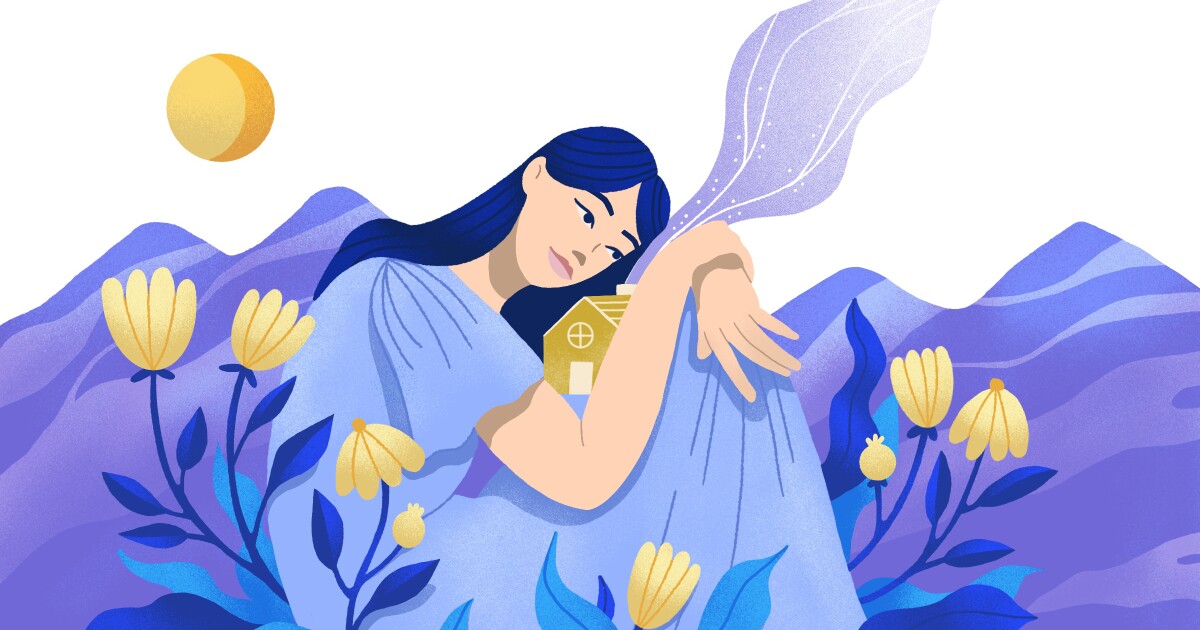 L.A. Affairs: L.A. feels foreign to me as I learn to date again

I upended my life at the beginning of the pandemic. It was after several ghastly years that included divorce, the death of my cat, Billi, and the loss of the flat I couldn‘t afford. I started a digital content job in the food world, but the company was rocked by financial upheaval and ended after 18 months. I was in therapy to process my grief and figure out how to maneuver in this next chapter in my life.

London no longer gleamed like it did when I moved there in 2004. I felt exhausted living in the city and feeling cemented to a desk. What I craved was a simpler life and using my hands to create beautiful things. Cooking and being a chef was what I wanted to pursue.

I went to cookery school in the Irish countryside, healing alongside nature. Then followed a year resembling “Eat Pray Love” in Italy, but the stories of being whisked away by a steamy Italian stud never happened.

I shifted between continents and professional kitchens. What might have looked like an enviable life set against romantic backdrops was really a person reeling from grief and helplessness. With chronic lower back pain in the way of doing my job and the looming pandemic, I wondered if it were a sign. I had been toying with the idea of taking the first steps toward being closer to my family, a family I hadn’t been on the same continent with since my 20s, a family estranged since my parent’s divorce.

That meant moving back to Los Angeles. And quickly.

I told myself, “I am a well-seasoned traveler who has moved countless times. It’ll be ok.”

I was born in Los Angeles but never lived here. My family moved to Hong Kong when I was 2. I had summer holidays with my large extended Chinese-American family here, but I don’t “know” L.A. — its rhythm, the people, the neighborhoods, the history, the vibe. That is a distorting thing for me, to have familial links to a place that feels foreign.

As I was reunited with moving boxes from the places I had lived (East Cork, Rome, New York, London), the lockdown was commencing. In one respect, taking a pause when the world stopped couldn’t have come at a better time.

However, trying to create a life when the usual channels of connection have ceased has been a challenge.

“How’s your personal life?” a friend from London routinely asks on phone calls. “Have you met anyone?” another friend queries in passing. Such questions leave me perplexed and ashamed. For one thing, moving is exhilarating but it places the person who has moved in a position of vulnerability. Such questions just pile on. Also, are we not living in a pandemic? Surely “progress” might be measured differently when no one can really leave the house.

This will be my third time using a dating app: I find that 92% of matches fizzle because it’s hard to create interest if you don’t find a way to take the conversation away from the app or meet in person within the first couple of weeks. The pandemic has made much of that impractical.

The remaining 8%? Some take an aggressively deviant route, delivering provocative photos and demanding them in return. (Just for the record, that’s not my style.) Other matches quickly confide the woes of their personal lives. (I have my own, so no thank you.) Then others like to lead you on with flirtatious text messages that go on and on but never actually go anywhere, something I’ve discovered is referred to as “breadcrumbing.”

While I have been doing my best to be open to dating during this intense time, some of the hardest knocks come from trying to forge new friendships in this new city. Like a garden, it requires time and patience. But when I find myself rescheduling a Zoom or phone call for the sixth time or I keep reading the words “catch up soon” or worst of all, I am left hanging without any reply, it hurts. Like Phil Connors in “Groundhog Day,” I can’t help but feel like this place is too familiar.

Over the last decade, my family moved back to Los Angeles. When I joined them, I worried about the unraveling of past troubles and whether I would have the personal space I needed. But everything I had learned I had to unlearn. So maybe my personal life has struggled during the last year. What has helped? Being back in the bosom of family and finally feeling rooted after aimlessly moving from one place to another.

Thanks to therapy, to the pandemic, to stillness, to time and unbearable loneliness, I look back on the people that have entered my life over the years as gifts. Our time is precious (something I have been hearing a lot of lately), and whether it was a brief encounter or something more significant, each person gave me a piece of their time and enriched my life and I hope it was the case for them too.

Even the unsuccessful romances had their part. They served as a gateway into learning something about myself and Los Angeles, such as the Valley is the equivalent of Cockfosters in London, how to initiate moving from the app to real life and that a British accent goes over very well here.

I am also changing the way I view rejection, not as something that should sever my self-esteem but as an awareness that I have no idea what is going on in someone else’s life. We are complex beings with our own sets of hardships and issues, so a little kindness and compassion are needed.

So the next time I’m talking to a friend, instead of dreading a question about my personal life, I can answer proudly.

The author is a writer living in Los Angeles.

L.A. Affairs chronicles the search for romantic love in all its glorious expressions in the L.A. area, and we want to hear your true story. We pay $300 for a published essay. Email [email protected] You can find submission guidelines here.

Loading...
Denial of responsibility! TechiLive.in is an automatic aggregator around the global media. All the content are available free on Internet. We have just arranged it in one platform for educational purpose only. In each content, the hyperlink to the primary source is specified. All trademarks belong to their rightful owners, all materials to their authors. If you are the owner of the content and do not want us to publish your materials on our website, please contact us by email – [email protected]. The content will be deleted within 24 hours.
AffairsdatefeelsForeignlearnlifestyle newslifestyle updatenews update
0
Share

Doctor who led AFI’s fight against doping passes away