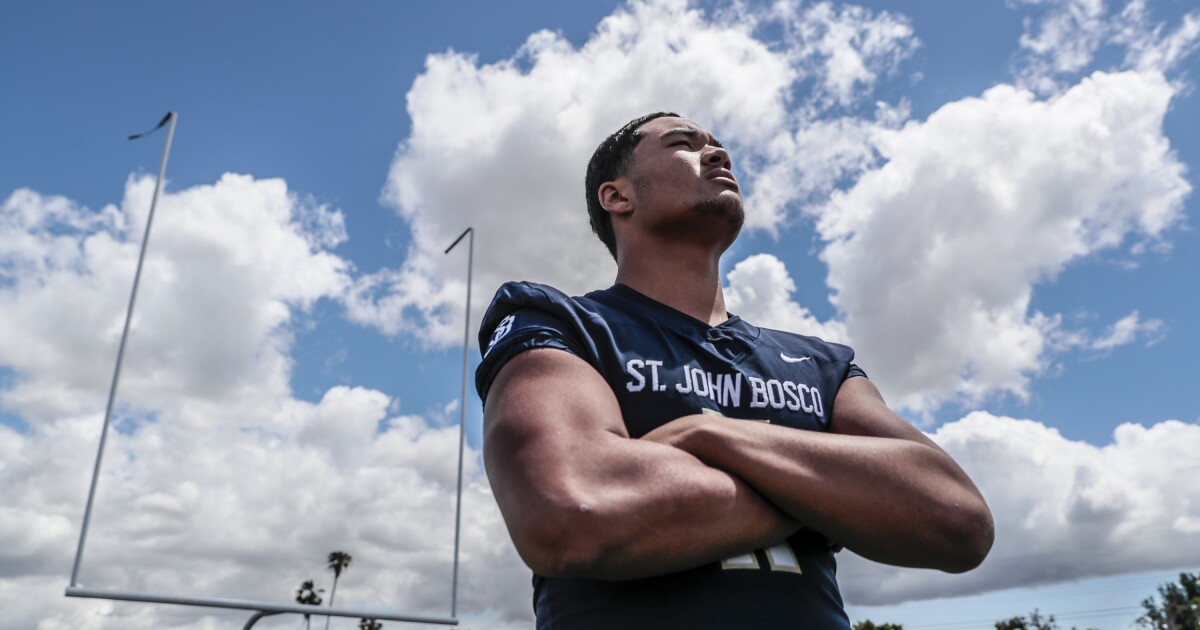 To see 6-foot-5, 263-pound sophomore Matayo Uiagalelei line up as a receiver against a college-bound cornerback, then run down the field and catch the ball for a touchdown as if he were rising up to grab a rebound will be among the lasting memories of the 2021 COVID-19 spring football season in Southern California.

“He’s special,” Servite coach Troy Thomas said. “That’s an old-school player playing both ways and dominating on both sides of the ball.”

As much attention as he received his freshman year for being the younger brother of Clemson quarterback DJ Uiagalelei, this spring the St. John Bosco star went on a six-game rampage that was a true revelation about his athleticism, hands and skills.

“He’s not only the best player in the Southern Section, he’s the best player in Southern California and in the entire state,” St. John Bosco coach Jason Negro said. “He’s going to be the No. 1 recruit in the nation. You cannot coach that skill set and strength, and his work ethic is only going to lead him to get better.”

For his two-way contributions against top competition, Uiagalelei has been selected The Times’ player of the year for the spring football season.

“It was a weird year, but I love making plays,” Uiagalelei said.

Uiagalelei said he learned to catch the ball by serving as the receiver for his older brother growing up. DJ would always bring him along for workouts.

DJ’s passes came in with so much velocity that Matayo was forced to concentrate and develop his hand-eye coordination.

The spring season saw Uiagalelei make an extreme leap from his freshman season.

“From my freshman year, I’m bigger, stronger, faster,” he said. “I now know what I’m doing.”

As a receiver, he caught eight passes for 120 yards and three touchdowns. As a defensive end, he had 16 tackles. There also were blocks he made for running backs and times he was double-teamed on defense, freeing a teammate to make a play.

“For him to have the dominant performances he had in a six-game stretch was the best I’ve seen since maybe Wyatt Davis in 2016,” Negro said, referring to the former St. John Bosco offensive lineman who went to Ohio State.

Next up for Uiagalelei is more training in the weight room to get stronger, then back on the field this fall for his junior season. The future is very bright.

Denial of responsibility! TechiLive.in is an automatic aggregator around the global media. All the content are available free on Internet. We have just arranged it in one platform for educational purpose only. In each content, the hyperlink to the primary source is specified. All trademarks belong to their rightful owners, all materials to their authors. If you are the owner of the content and do not want us to publish your materials on our website, please contact us by email – admin@techilive.in. The content will be deleted within 24 hours.
Loading...
AllStarfootballnews updatePlayersports newssports updateTeamtechi live
0
Share

Seven innovations brought to the smartphone world by LG | ZDNet