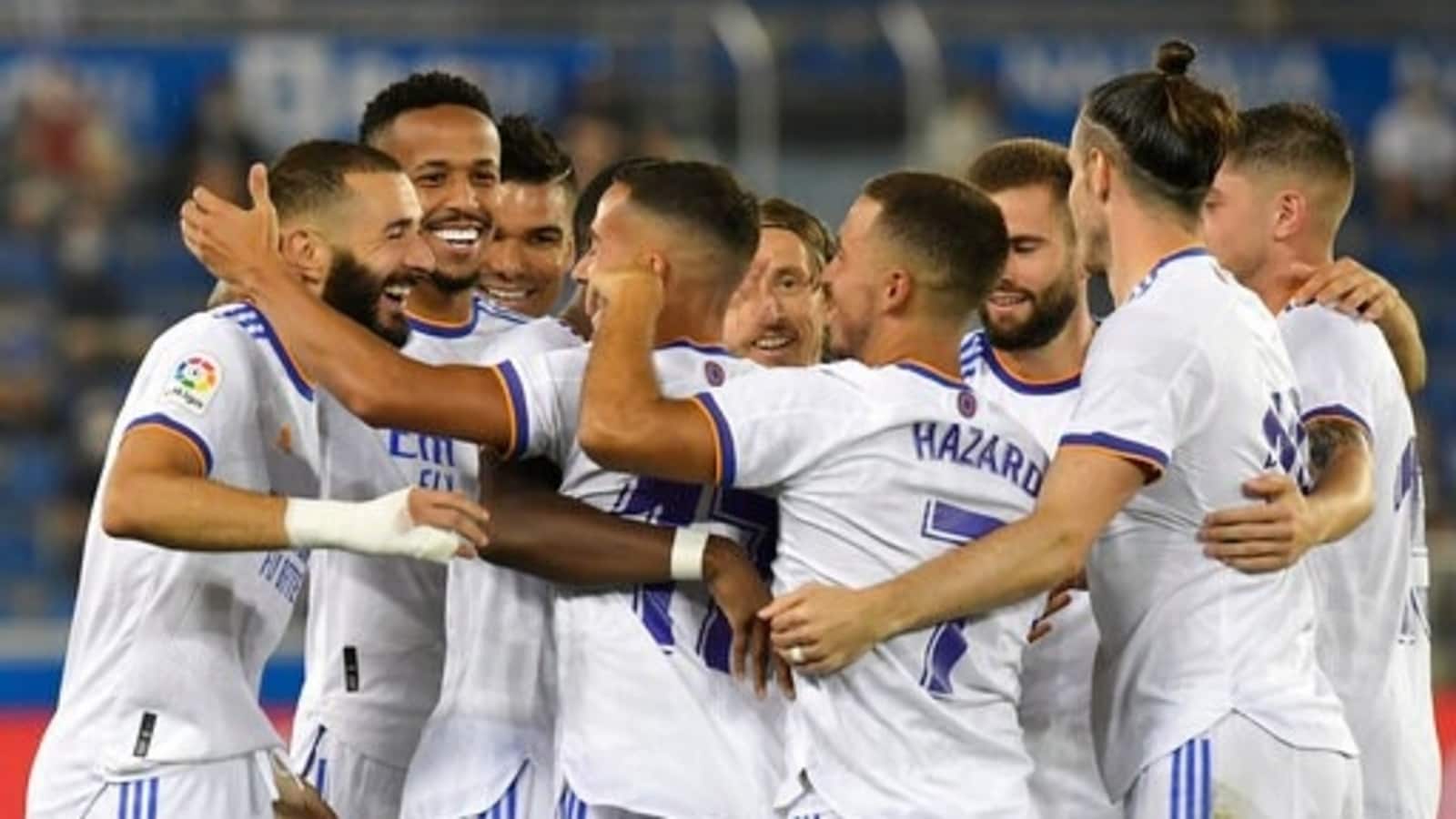 Karim Benzema picked up where he left off last season by scoring twice to fire Real Madrid to a 4-1 win away to Alaves in their opening game of the LaLiga campaign.

Real had an uninspiring first half in Carlo Ancelotti’s first league game since taking charge of the club for a second time but Benzema settled their nerves by blasting the ball into the net in the 48th minute after being teed up by Eden Hazard.

Defender Nacho Fernandez added to Real’s lead eight minutes later, sliding in to stab a Luka Modric through ball into the net from close range.

Benzema scored a scrappy second goal in the 62nd but moments later Alaves pulled one back when striker Joselu slotted in a penalty after a foul by goalkeeper Thibaut Courtois.

Substitute Vinicius Jr added a final goal for the visitors in stoppage time, netting with a diving header as he met a cross from debutant David Alaba.

French striker Benzema was Real’s standout player last season with 23 league strikes, more than a third of the team’s goal haul, and his form earned him a recall to the France squad for the first time in six years.

Ancelotti marvelled at Benzema’s performance and said he was a better player than when he coached him at Real between 2013 and 2015, when the Frenchman was more of a support striker for Cristiano Ronaldo.

“To call Benzema just a striker does not do him justice. He is a very complete player, far more complete than five years ago,” the Italian coach said.

“He is the one who finishes our moves off but he also reads the game so well.”

The Italian also criticised his side for their sluggish start but was pleased with how they improved after halftime.

“The first half we were a little slow when we had the ball and when we didn’t have it, we needed to press with more intensity, the game was slow and that’s not what we wanted,” he added.

“But we were much better in the second half, we showed more intensity and had more quality.”

Real got to play in front of fans for the first time in a league game since March 2020 although fewer than 4,000 spectators were allowed into Alaves’ Mendizorrotza stadium due to the local government’s coronavirus restrictions.

The few supporters present were nearly given an early treat when midfielder Pere Pons pounced on a loose ball inside the area but failed to keep his shot under the crossbar.

Alaves also appealed for a penalty in the first half against Real’s Lucas Vazquez when he blocked a cross although the referee correctly ruled that the ball had struck his chest rather his arm.

Madrid lined up with a front three of Benzema, Hazard and Gareth Bale, who was making his LaLiga return after spending last season on loan at Tottenham Hotspur.

Hazard has hardly got going in his two seasons with Real but looked sharp while Bale had a couple of attempts on goal without causing goalkeeper Fernando Pacheco too much trouble.

Denial of responsibility! TechiLive.in is an automatic aggregator around the global media. All the content are available free on Internet. We have just arranged it in one platform for educational purpose only. In each content, the hyperlink to the primary source is specified. All trademarks belong to their rightful owners, all materials to their authors. If you are the owner of the content and do not want us to publish your materials on our website, please contact us by email – [email protected]. The content will be deleted within 24 hours.
alavesBenzemadoublehelpsKarimLa Ligala liga latest newsLa Liga news
Share