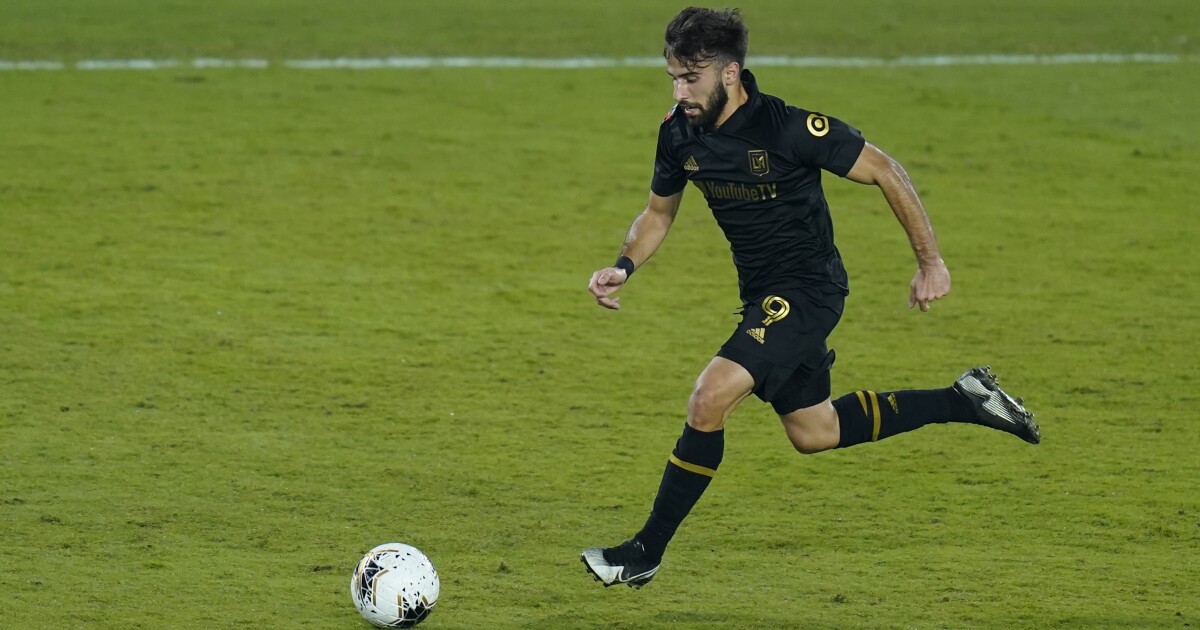 By LAFC’s lofty standards, Saturday night’s attendance of 10,483 was nothing special. Before COVID-19 hit, the team sold out 39 consecutive MLS games at Banc of California Stadium.

But the modest crowd, which filled less than half the stadium, represented a big step back toward post-pandemic normality because it was the largest for a soccer game in California since the coronavirus hit. So did Carlos Vela’s return to the starting lineup for the first time in more than a month.

And at times the way LAFC played was reminiscent of old times too with a pair of first-half goals from Diego Rossi lifting it to a 2-1 win over the Colorado Rapids that ended a four-game winless slide and a two-game losing streak.

The victory also lifted LAFC (2-2-2) out of the Western Conference cellar and got the team back into the win column for the first time since opening day — which, not coincidentally, was the last time Vela started.

Vela, who is returning from a quadriceps injury, wasted little time in making his presence felt Saturday, bending a cross into the center of the box for Mark-Anthony Kaye in the eighth minute, only to have Colorado keeper William Yarbrough make the save.

There would be no denying Rossi six minutes later, with the league’s reigning Golden Boot winner using his left arm to hold off Colorado defender Keegan Rosenberry and deflect a Corey Baird pass past Yarbrough from the center of the box for his second goal of the season.

Vela, a dangerous playmaker all night, nearly got a goal of his own in the 26th minute, but his left-footed shot from distance — one of two he took in the game — was high and wide to the left. He was back seven minutes later, though, rolling a pass to the top of the 18-yard box for Rossi, who had again escaped Rosenberry. Rossi slowed the ball with his right foot and then blasted a left-footed shot from about 12 yards over Yarbrough and under the crossbar.

Michael Barrios halved the lead for Colorado (3-2-1) on a breakaway five minutes into the second half, splitting two defenders to dash into the penalty area and tap home a through ball from Diego Rubio.

Vela came out four minutes after that, having taken just two shots, and seconds later Barrios nearly tied the score. But his try from the right wing died in the gloved hands of LAFC keeper Pablo Sisniega, who was tested just twice on the night.

Now that Vela’s back, all LAFC needs are its supporters to be made whole again. In the team’s first two-plus seasons, home was a fortress for LAFC, with the team losing just twice before fans. It took the team just five games in an empty stadium to match that last year.

LAFC is unbeaten in three games at home this season, but it’s missing its old swagger as much as its missing the fans. However, with the Dodgers, Angels and Galaxy all announcing that they will be playing before full houses by the middle of June, LAFC is optimistic it too will be have a sold-out stadium for its first home match next month, on June 19 when its plays host to the Houston Dynamo.

“Fans are obviously a huge part of our team playing at home,” Baird, whose only experience with a sellout crowd at Banc of California was as an opponent, said last week. “Getting fans back in general, we’re all excited about.”

Denial of responsibility! TechiLive.in is an automatic aggregator around the global media. All the content are available free on Internet. We have just arranged it in one platform for educational purpose only. In each content, the hyperlink to the primary source is specified. All trademarks belong to their rightful owners, all materials to their authors. If you are the owner of the content and do not want us to publish your materials on our website, please contact us by email – [email protected]. The content will be deleted within 24 hours.
Loading...
CarlosColoradofansLAFCnews updatesports newssports updatetechi live
0
Share

Cybersecurity is Now Essential to Corporate Strategy. Here’s How to Bring the Two Together.