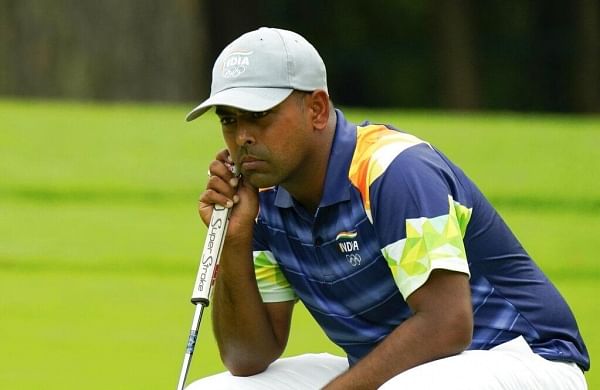 GREENSBORO: Indian golfer Anirban Lahiri left a few birdie chances but finished bogey-free with a card of 3-under 67 that saw him jump 13 places to Tied-28th at the end of the third round of the Wyndham Championship here.

Lahiri, who started the day at 4-under, had an eagle from just over 17 feet and his only other gain was a chip-in from around 15 feet on seventh.

He parred his last 11 holes.

Overall, Lahiri’s game looked solid as he hit 14 of the 18 greens in regulation.

In fact, on the seventh when he missed the green, he chipped in from five yards.

He is already assured of a place in the FedEx Cup play-offs for which the Top-125 make the grade.

Russell Henley shot 1-under 69 on Saturday to take a three-stroke lead and is one round away from his first PGA TOUR win in four years.

One of the highlights of Henley’s round was when he rolled in a 33-foot putt for eagle on the par-5 15th at the Sedgefield Country Club.

He finished at 15-under 195 as he tries to win his fourth career title and first since the 2017 Houston Open.

Tyler McCumber, the son of 10-time TOUR winner Mark McCumber, searching for his maiden win, shot a 66 and was at 12 under in second.

There are six players at 11-under including three FedExCup Playoff outsiders in Rory Sabbatini, Scott Piercy and Roger Sloan, who now have a chance to tee it up in the 125-man field for the postseason that starts next week at THE NORTHERN TRUST.

Others tied at 11 under were Branden Grace, Kevin Kisner and Kevin Na.

Former FedExCup champion Justin Rose, who started the week 138th in the standings, shot 69 after a bogey on the final hole.

He’s 126th in the projections.

Denial of responsibility! TechiLive.in is an automatic aggregator around the global media. All the content are available free on Internet. We have just arranged it in one platform for educational purpose only. In each content, the hyperlink to the primary source is specified. All trademarks belong to their rightful owners, all materials to their authors. If you are the owner of the content and do not want us to publish your materials on our website, please contact us by email – [email protected]. The content will be deleted within 24 hours.
Anirban LahiriChampionshipFedEx cup playoffsGolfGreensboroLahirimovesnews update
Share

Why elderly, diabetic are at higher risk of Covid infection