Notice: amp_is_available was called incorrectly. `amp_is_available()` (or `amp_is_request()`, formerly `is_amp_endpoint()`) was called too early and so it will not work properly. WordPress is currently doing the `pre_get_posts` hook. Calling this function before the `wp` action means it will not have access to `WP_Query` and the queried object to determine if it is an AMP response, thus neither the `amp_skip_post()` filter nor the AMP enabled toggle will be considered. It appears the theme with slug `publisher` is responsible; please contact the author. Please see Debugging in WordPress for more information. (This message was added in version 2.0.0.) in /home/runcloud/webapps/techilive/wp-includes/functions.php on line 5313
 Lakers' Alex Caruso puts on another show in win over Warriors - TechiLive.in 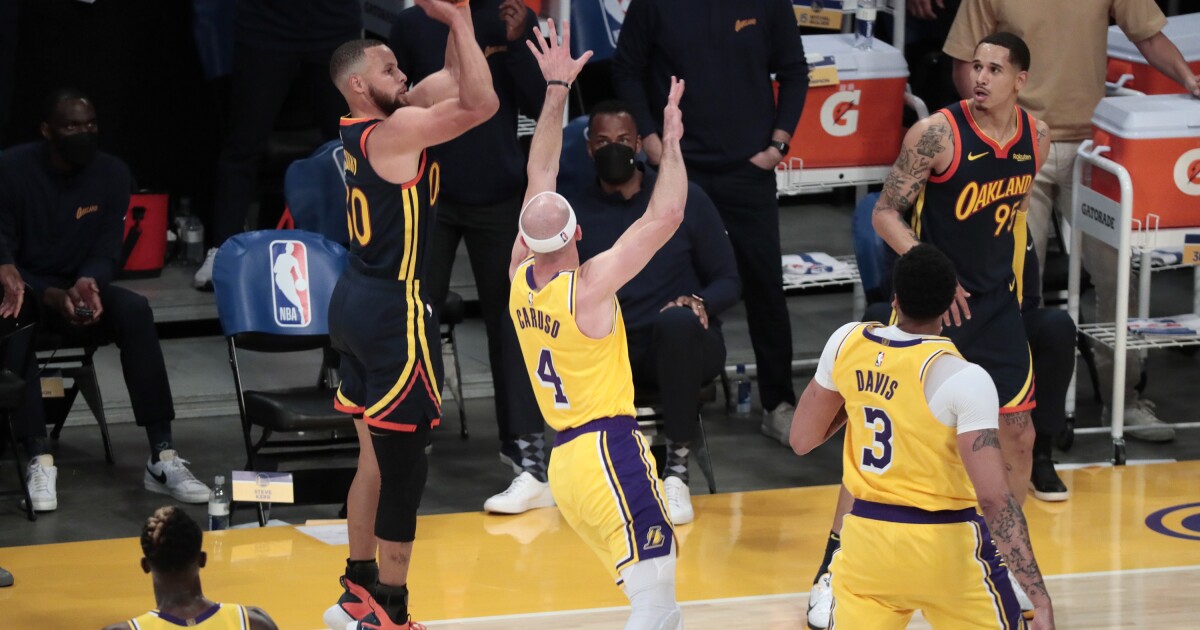 Lakers’ Alex Caruso puts on another show in win over Warriors

LeBron James began bobbing his head as the question was asked about the importance of Alex Caruso in big moments, the Lakers’ superstar affirming how his teammate frequently steps up when the time calls for it.

The Lakers were trying to keep within striking distance of the Golden State Warriors on Wednesday night during the NBA’s play-in tournament, but Los Angeles was floundering.

Worse, the Lakers’ two stars, James and Anthony Davis, were struggling in the first half, both unproductive and looking uneasy.

He had 12 of his 14 points by halftime, his play key to helping the Lakers eventually pull out a 103-100 win over the Warriors at Staples Center.

“His attention to detail, just smart, very smart, knows what he wants to do,” James said of Caruso during his videoconference after the game. “Always in the right place at the right time. He just makes plays, just makes plays. Some of them show up in the box score, some of them don’t. But tonight, they definitely showed up in the box score. I mean, he pretty much carried us in the first half offensively and we just had to match him in the second half.”

Caruso made all five of his shots in the first half, including two three-pointers.

When he saw openings, Caruso didn’t hesitate to take advantage of the Warriors’ defense slacking off him.

“I was just trying to be aggressive to score,” Caruso said during his videoconference. “Because I think they were playing — maybe not in a disrespectful way — but they weren’t playing me and they weren’t playing some of our guards because they were so worried about AD. So, I got a couple layups in transition, I think. An open three on a kick-out that I knew I was going to have. And then just shot-ready in the corner on the other one. Just doing what I do, being opportunistic. I thought a couple of them could have been and-one opportunities. … So, just fortunate to obviously be whatever it was — four-for-four, five-for-five [shooting] — especially when we weren’t playing great offensively in the first half.”

Caruso has been dealing with a sore right foot late in the season. He said getting rest and missing the Indiana game helped the foot improve. He’ll be ready when the seventh-seeded Lakers play the second-seeded Phoenix Suns, with their All-Star backcourt of Devin Booker and Chris Paul, in the first round of the playoffs starting with Game 1 on Sunday.

“It was just a little bruising and this time of year,” Caruso said, “you can get a bruise on your elbow or on your shoulder, your thigh, and mine just happened to be on my foot. So, just rest and being ready to go, doing the proper treatment. Whatever I need to do to be ready, because the West is a gauntlet of guards, starting tonight with Steph (Curry) and obviously with our next round matchup, Book and CP, it’s going to be a handful.”

Caruso has been a star in his role for the last two seasons.

He started in Game 6 of the NBA Finals against the Miami Heat and proved then he wasn’t afraid of the big moments.

Caruso took on the task when it was his turn Wednesday to defend Curry, who still broke free for 37 points. Caruso finished with three steals, three rebounds, two assists and one blocked shot.

“I’m really just trying to win another championship, man,” Caruso said. “I don’t think too big-picture until it’s over with. Just love playing basketball. We got a good-ass team, like I told you a couple weeks ago. And I’m just competitive, man. I like to play basketball. …

“I think it’s just part of my progression. I’m going to try and keep getting better and better and better and part of that is being aggressive to score and a lot of times that will set up my pass and good opportunities for my teammates. So, I don’t really think too much big-picture to answer your first question. I’m really just trying to win 16 more games.”

Denial of responsibility! TechiLive.in is an automatic aggregator around the global media. All the content are available free on Internet. We have just arranged it in one platform for educational purpose only. In each content, the hyperlink to the primary source is specified. All trademarks belong to their rightful owners, all materials to their authors. If you are the owner of the content and do not want us to publish your materials on our website, please contact us by email – admin@techilive.in. The content will be deleted within 24 hours.
AlexCarusoLakersnews updateputsshowsports newssports update
0
Share