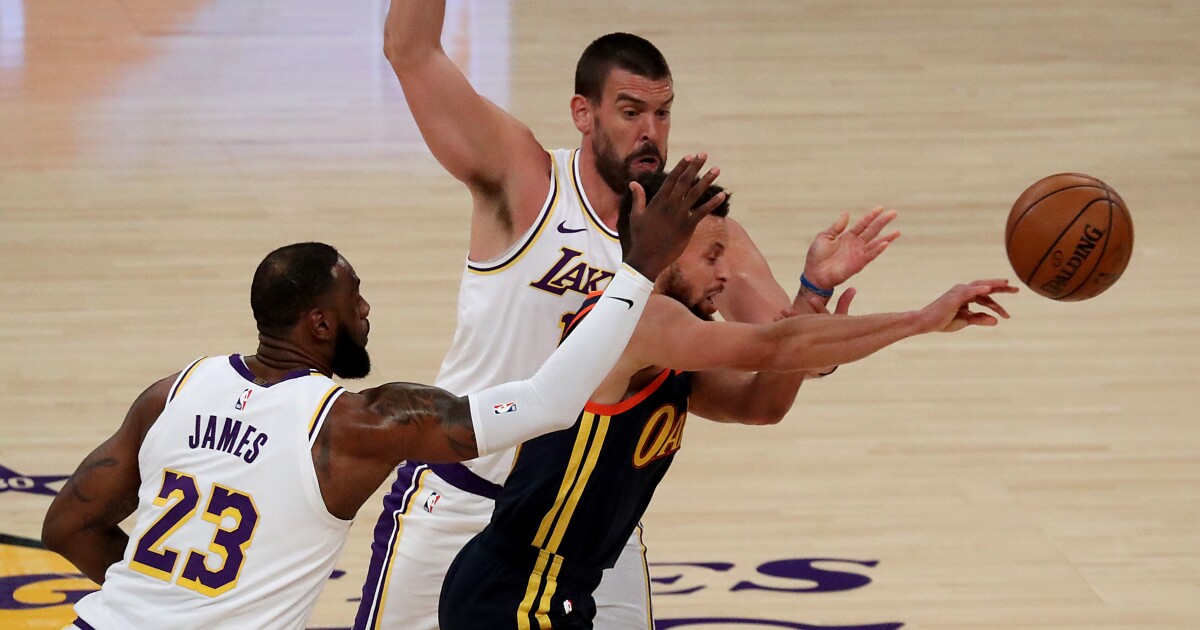 It’s probably the only way this regular season could’ve ended, the A team Lakers against some C team opponent, the result almost immaterial to what’s coming next. Because why should a regular season full of twists end without at least some uncertainty?

The Lakers never had control of their season, not with the short turnaround after their bubble championship, not with their two superstars missing massive time and not with so many questions as they head into the postseason.

It didn’t matter that the Lakers were complete Sunday night in New Orleans or that they mostly cruised to a 110-98 win. Their fate was decided in Portland, where a blowout win against Denver sealed their play-in fate.

So why was LeBron James in the game?

Full strength was all the Lakers had left. And then with another faulty step, even that was in doubt. The plan was to get James out of the game right around the time he appeared to roll his right ankle.

Just another time fate intervened in what the Lakers had planned for.

“You can’t worry about what hasn’t happened yet,” coach Frank Vogel said afterward. “Guys have to get in rhythm and have the ability to play well. …It’s always a balance.”

Vogel said James told him that he was OK, that the ankle wouldn’t be a problem. And that’s good. Because a problem could be coming for the Lakers in the NBA’s first iteration of a four-team play-in tournament.

Stephen Curry and the Golden State Warriors are one of the scariest teams anyone could play in a one-game series. The Lakers will try to extinguish Curry, the NBA’s scoring champion, Wednesday at Staples Center. A loss means the Lakers will have one final chance to extend their season, either facing Ja Morant and the Memphis Grizzlies or Gregg Popovich‘s San Antonio Spurs.

It’s a long way from the presumed Lakers-Brooklyn Nets NBA Finals that seemed so inevitable before Anthony Davis grabbed at his Achilles tendon on Feb. 24.

Since then, it’s been a fight for some stability — a battle they’ve not been able to win. And even when it seemed like they had it, a wrong step or a bad test, and it would disappear.

The Lakers never had control of this season, not after the NBA and the NBPA sprung it on them that the season would start before Christmas. The offseason was about recovery instead of preparation, scouts and executives around the league murmuring while Davis tried to play himself into shape.

His injury was bad; James’ injury — the result of some reckless hustle — made things almost impossible. A late-season trip to the NBA’s COVID protocols for Dennis Schroder meant the Lakers had to play a stretch of games without a true point guard.

Maybe it was the compressed schedule used by the NBA to play as many games in as short a time as possible.

And, certainly, it could’ve been the cumulative nature of the last two seasons blending into one.

Of the four teams that played in the bubble the longest, all have struggled with some type of adversity or injury problems. Denver fared the best but lost Jamal Murray to a devastating knee injury.

The Boston Celtics, a preseason favorite, are in the play-in tournament in the East with Washington, Indiana and Charlotte. Miami will have a tough first-round series against third-seeded Milwaukee after an uneven season.

And the Lakers, well, who knows how James’ injured ankle will react to this latest misstep?

“We definitely have flaws that we have to cover up fast,” Jared Dudley said.

Their tiebreaker chances went away in key losses to Dallas and Portland, a play here or a play there away from getting this week off before the playoffs begin. Seeding was never the driving force for how the Lakers played this season, but it might end up being critical.

“The seeding to me is always the results, you know what I mean? I think the proper way to manage a team going into the playoffs is let’s be as healthy as possible and as in rhythm as possible and win as many games along the way as you can,” Vogel said before the game. “Every night that you go out and compete with responsible minutes for your players and win as many games as you can and wherever the seedings fall, it falls and you go in confident against any matchup.”

Maybe the Lakers should be confident — Sunday it seemed like teams around the NBA did their best to avoid having to play them. As teams maneuvered to get the best path in the playoffs, seemingly everyone looked at the Lakers and tried to go a different direction.

Dudley said that went noticed inside the Lakers locker room, and by his calculus, it’s a flawed idea.

At least that’s the idea. The question is whether the Lakers actually can see their plans come true.

“We’re in a position to do something special, no matter what seed we’re in,” Davis said. “It’s only unsuccessful if we don’t win it all.”

Loading...
Denial of responsibility! TechiLive.in is an automatic aggregator around the global media. All the content are available free on Internet. We have just arranged it in one platform for educational purpose only. In each content, the hyperlink to the primary source is specified. All trademarks belong to their rightful owners, all materials to their authors. If you are the owner of the content and do not want us to publish your materials on our website, please contact us by email – [email protected]. The content will be deleted within 24 hours.
LakerslongNBAnews updateRepeatRoadsports newssports update
0
Share

How Crocs used robots to rule the comfort economy | ZDNet