Notice: amp_is_available was called incorrectly. `amp_is_available()` (or `amp_is_request()`, formerly `is_amp_endpoint()`) was called too early and so it will not work properly. WordPress is currently doing the `pre_get_posts` hook. Calling this function before the `wp` action means it will not have access to `WP_Query` and the queried object to determine if it is an AMP response, thus neither the `amp_skip_post()` filter nor the AMP enabled toggle will be considered. It appears the theme with slug `publisher` is responsible; please contact the author. Please see Debugging in WordPress for more information. (This message was added in version 2.0.0.) in /home/runcloud/webapps/techilive/wp-includes/functions.php on line 5313
 Lakers' biggest offseason problem: What to do at center? - TechiLive.in 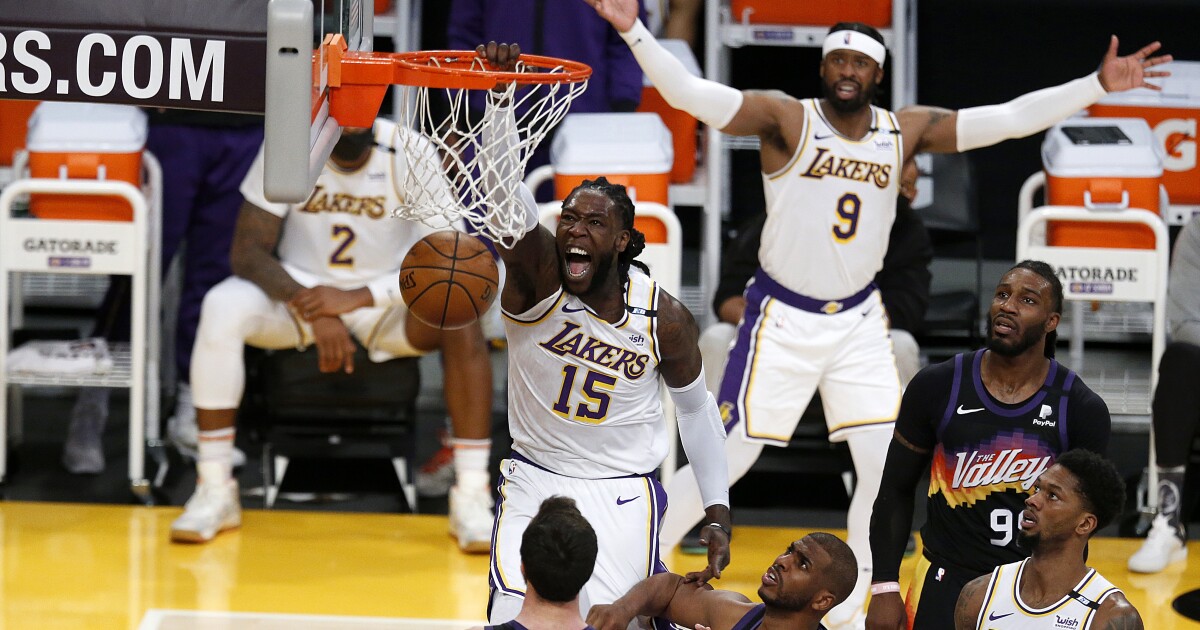 Lakers’ biggest offseason problem: What to do at center?

In some ways it was the perfect way for the season to end, Lakers coach Frank Vogel making a drastic lineup change at the position that was unsettled this season.

The Lakers signed Marc Gasol last offseason to a two-year contract to be their starter. They added Montrezl Harrell as a backup. Then, in a talent grab after the trade deadline, they put Andre Drummond into the mix, giving the team one more center than it need — maybe without finding the one center the team could trust most.

With their season on the line, Vogel and the Lakers made the decision to remove Drummond from the starting five and rotation. With the Thursday’s loss sending the Lakers into the offseason, what they do with their trio of big men is one of the most pressing questions.

Drummond is a free agent while Harrell has a $9.7-million player option. Neither acted like he had any firm grasp on his future plans.

Vogel said he hoped Drummond would be with the Lakers for a long time.

“He really played well for us and was a good culture fit, [fit] well with the guys and was very well liked,” Vogel said. “We just said it all along. We were concerned about how much time we would have to build a cohesion in the playoffs.”

Harrell fell out of Vogel’s rotation late in the season with Gasol getting most of the backup center minutes. Vogel moved Harrell to the bench after Game 1, and in limited rotation minutes in Game 6, the Lakers were a minus-16 in Harrell’s eight minutes.

When asked if the Lakers told him he was a part of their future, Harrell deflected.

“Brotherman, you’re digging a little bit too deep into what I don’t have the answer to. Nice try,” he said. “But like I told you, the game just ended last night. I’m about to go home and be a dad. You want to know about that, you can ask questions about that. But as far as my future with being a Lakers basketball player, we’ll worry about that later when free-agency time rolls around.”

Lakers fans react to their season coming to an end with a loss to the Phoenix Suns on June 3, 2021, at Staples Center.

Harrell must decide on his option by the end of July. Free agency opens Aug. 2 when teams can negotiate with players, who can sign starting Aug. 6.

Gasol said the season presented the team with plenty of chaos, though things were better than they might’ve appeared. While the Drummond signing did have him evaluating his options, he ultimately felt staying with the Lakers was the right decision.

But considering his light salary and age (36), Gasol said he’s not sure what his role will be if he’s back next season.

“They have a lot of decisions to make. I’m not [at] the top of the list of those decisions,” he said. “We’ll see later on this summer how the team looks and what they want to do, what the plan is.”

Vogel said assistant coach Jason Kidd should be at the top of the list for any team looking for a coach. Sources have said Kidd will receive strong consideration in Boston and Portland, after the Trail Blazers parted ways with Terry Stotts on Friday. … Vogel, about to enter the third year of his three-year contract with the Lakers, said his preference is to keep extension discussions private, but both he and general manager Rob Pelinka expressed happiness with their partnership. …

Talen Horton-Tucker is one of the Lakers’ more interesting free agents because of his age — he turns 21 in November — and potential. Horton-Tucker said he hadn’t thought much about free agency. He, like LeBron James and Anthony Davis, is represented by Rich Paul and Klutch Sports. …

Veteran free agents Jared Dudley, Wesley Matthews and Markieff Morris expressed desire to re-sign with the Lakers. “There’s no question in my mind, in my heart, that I want to run it back,” Matthews said. …

Pelinka said the hope is to keep the Lakers “core group” together, but he wouldn’t say if ownership cleared him to go into the luxury tax next season. “Hopefully, with all of our fans being able to come back and be a part of the building, we owe them the work to start the process of retooling and have a championship-caliber team that can do special things next year,” Pelinka said. “That’s the driving passion, and there’s alignment there between Jeanie [Buss], the front office, the coaches. That will always be the goal.”

Denial of responsibility! TechiLive.in is an automatic aggregator around the global media. All the content are available free on Internet. We have just arranged it in one platform for educational purpose only. In each content, the hyperlink to the primary source is specified. All trademarks belong to their rightful owners, all materials to their authors. If you are the owner of the content and do not want us to publish your materials on our website, please contact us by email – admin@techilive.in. The content will be deleted within 24 hours.
Loading...
BiggestCenterLakersnews updateoffseasonproblemsports newssports update
0
Share