Notice: amp_is_available was called incorrectly. `amp_is_available()` (or `amp_is_request()`, formerly `is_amp_endpoint()`) was called too early and so it will not work properly. WordPress is currently doing the `pre_get_posts` hook. Calling this function before the `wp` action means it will not have access to `WP_Query` and the queried object to determine if it is an AMP response, thus neither the `amp_skip_post()` filter nor the AMP enabled toggle will be considered. It appears the theme with slug `publisher` is responsible; please contact the author. Please see Debugging in WordPress for more information. (This message was added in version 2.0.0.) in /home/runcloud/webapps/techilive/wp-includes/functions.php on line 5313
 Lakers hold off late Suns rally for Game 3 win, 2-1 series lead - TechiLive.in 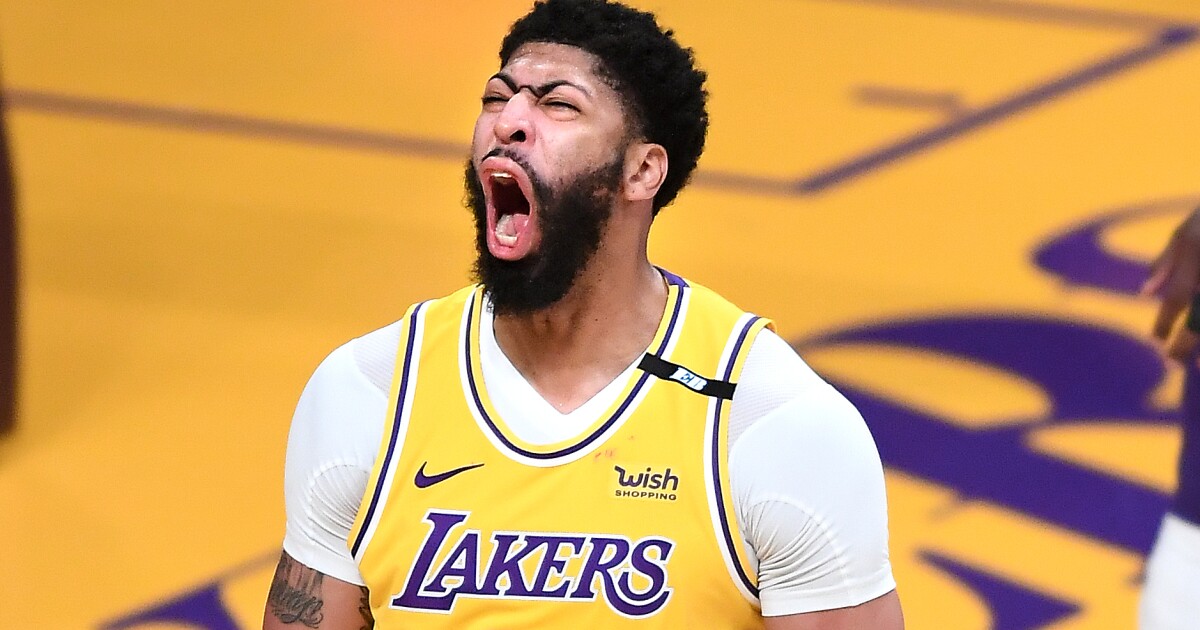 That was the message LeBron James walked down the floor in front of the rich and famous back courtside in Staples Center, one finger in the air, tallying the latest Lakers points — this time on a bucket from Anthony Davis after a pinpoint James assist.

And he wasn’t done adding them up.

After both teams struggled to put the ball in the basket in the previous quarter, the third belonged to Davis — the Lakers’ star too strong and too skilled for a Suns defense that again couldn’t contain him.

And with James bulldozing the defense, the Lakers’ stars outshone anything Phoenix could put together.

Davis scored 18 of his 34 points and James added 10 of his 21 in the third quarter, leading the Lakers to a 109-95 win, putting them ahead 2-1 in their first-round series with the Suns, getting the Lakers another step closer to their goal to repeat.

Davis and James outscored the Suns 28-23 in the third quarter by themselves, giving the Lakers some space after a defensive first half.

With an estimated 7,500 fans at the game — the most this season at Staples Center — James had the crowd on their feet in the fourth, torching series villain Jae Crowder with a flurry of moves, capped with an acrobatic reverse.

Thursday was the Lakers’ first home playoff game since 2013, when they started Darius Morris, Andrew Goudelock, Earl Clark, Pau Gasol and Dwight Howard against San Antonio. It was their first playoff win at Staples since 2012.

The Lakers were on their way to a blowout, leading 91-70, before one fan yelled “Not today,” during a Cameron Payne shot attempt. Payne connected and looked right at the fan. The fan kept talking, and Payne kept scoring, making his next two three-pointers, while quickly helping the Suns cut the 21-point lead down to eight.

But the Lakers had the Suns frustrated, Devin Booker getting ejected in the final minute after he shoved Dennis Schroder while Schroder drove to the basket. Booker scored 19 points on six-of-19 shooting. In the aftermath, Crowder was also ejected.

“Sometimes it can end badly for a player,” Davis said. “We don’t want to let the chirping lead to something like that.”

Highlights from the Lakers’ Game 3 playoff win over the Phoenix Suns on Thursday.

It was physical all night, with Davis’ game starting with a shot to the face. And it only got worse from there.

In the first quarter Davis got sent to the court after an inadvertent elbow from Deandre Ayton caught Davis across the face. He stayed on the floor deep into a timeout before eventually getting to his feet and re-joining the Lakers in their huddle.

And then in the second quarter, Davis hustled down the floor to block a Booker layup off the backboard. But as he landed, his left leg appeared to buckle, Davis grabbing immediately at his left knee.

He limped through most his minutes but was able to stay in the game. Davis said the knee didn’t bother him the rest of the way.

Schroder was also banged up early, hurting his left ankle after he drove past Torrey Craig for a score.

Kentavious Caldwell-Pope wasn’t as lucky, having to leave the game and head to the locker room after suffering a left leg injury while helping defend Booker. The Lakers originally said Caldwell-Pope was questionable to return with a quad contusion, but they quickly downgraded him, ruling him out for the remainder of Game 3.

In the series’ first two games, Caldwell-Pope, Wesley Matthews and Kyle Kuzma were four of 32 combined. And in Game 3, the trio missed its first seven shots before coach Frank Vogel got reserve guard Ben McLemore into the series for the first time.

Kuzma quickly swished a three-pointer. It was his only made field shot until another three in the final minute, though he had 10 rebounds and three assists.

Caldwell-Pope, who has been admirably trying to slow down Booker all series, did score on a pair of layups in the second quarter as he tried to play himself into an offensive rhythm.

The Lakers used their size to once again force the Suns into fouling, shooting 30 free throws to 18 attempts for Phoenix. Davis made 12 of 14 from the line. Game 4 is Sunday at Staples Center.

“We’re finding our groove at the right time,” Davis said.

Loading...
Denial of responsibility! TechiLive.in is an automatic aggregator around the global media. All the content are available free on Internet. We have just arranged it in one platform for educational purpose only. In each content, the hyperlink to the primary source is specified. All trademarks belong to their rightful owners, all materials to their authors. If you are the owner of the content and do not want us to publish your materials on our website, please contact us by email – admin@techilive.in. The content will be deleted within 24 hours.
gameHoldLakersLateLeadnews updateRallyseries
0
Share