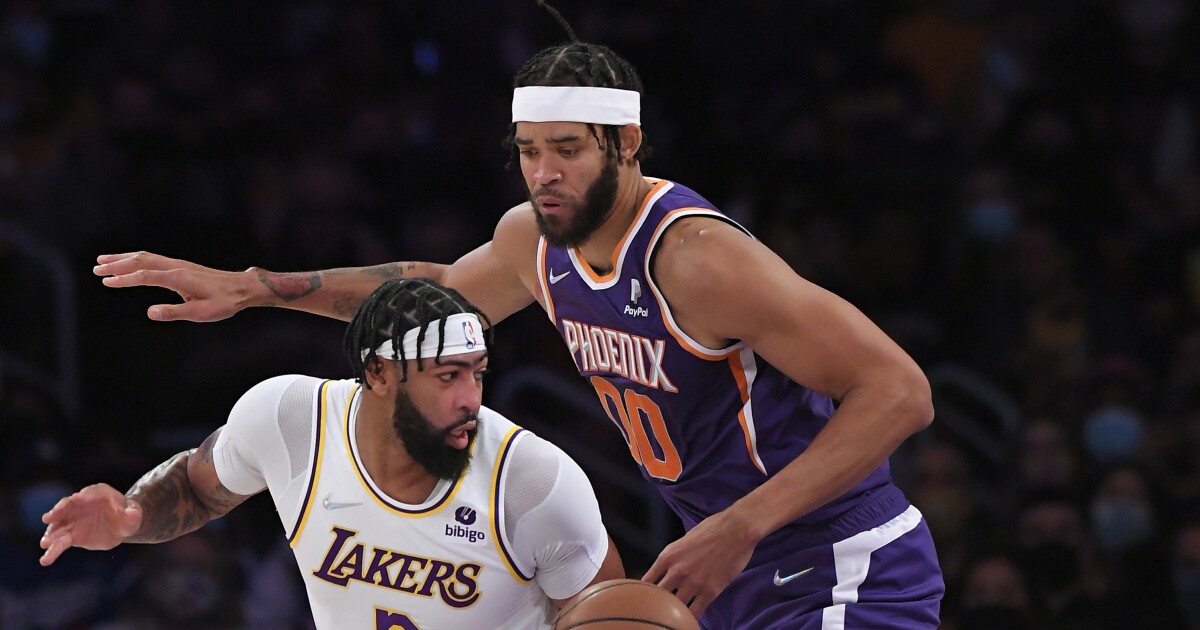 LeBron James had the best seats for this Los Angeles sports Sunday, spending his afternoon in a suite at SoFi Stadium before sitting courtside at Staples Center.

This preseason he’s been more spectator than superstar, the Lakers’ Big Three still yet to step foot on a NBA court together for a second of game action. James sat out the team’s third exhibition, a 123-94 loss against Phoenix.

As the Lakers head into their final week of training camp, they still are proceeding patiently in deploying James, Anthony Davis and Russell Westbrook.

Tuesday against the Golden State Warriors and Thursday in Sacramento are the final two chances.

“We’re just taking it game by game with these guys and see what they want to do,” coach Frank Vogel said.

James, according to Vogel, wants to play the final two games of the preseason which was part of why he didn’t play Sunday against the Suns. He took part in an on-court workout prior to tip-off before changing into street clothes at halftime.

Davis, Westbrook and Carmelo Anthony played together for the first time this preseason. Davis (19 points) and Anthony (17 on five-for-seven shooting) were the only Lakers in double figures. Westbrook added eight points and five assists.

For the second straight game, the Lakers’ new point guard struggled to protect the ball, turning it over nine times two nights after he turned it over six times when he and James debuted.

Following that game in Golden State, James made it clear that there were limited benefits to playing these exhibitions.

“It means something as far as individuals getting their rhythm, getting [in] game shape. We have our practices but being out on the floor and bumping against another team and things of that nature, that helps. All I’m saying, for me, there’s nothing I’m going to learn in preseason at this point in my career,” James said Friday. “Nothing at all. I’m not going to learn anything. Nothing. That means zero. But working our habits and building camaraderie and chemistry out on the floor, that’s always good. But like I said, I love the practices more than preseason games.”

While some absences, like James’, are designed, others are inevitable attrition, the result of wear and tear from a physical training camp, meaning extended minutes for younger players.

Talen Horton-Tucker is out for an undetermined amount of time with a sprained right thumb, the injury slowing momentum built by the youngest Laker. And Malik Monk, maybe the most consistent performer on the team this preseason, will miss a week after straining his groin.

Monk has shot 51.7% from the field this preseason, averaging 12.7 points in 21 minutes — not an unrealistic glimpse at what his role could be as an offensive spark off the bench.

“Well the tricky thing about our roster is we’ve got a lot of guys that I know and I trust to be rotational guys. Does that mean every guy is going to play every night? No it doesn’t. But Malik is definitely someone that I trust to be part of that rotation and feel confident that he can help us win games,” Vogel said. “To me, it’s a long season. If he misses a couple of these preseason games, it’s not the end of the world.”

Denial of responsibility! TechiLive.in is an automatic aggregator around the global media. All the content are available free on Internet. We have just arranged it in one platform for educational purpose only. In each content, the hyperlink to the primary source is specified. All trademarks belong to their rightful owners, all materials to their authors. If you are the owner of the content and do not want us to publish your materials on our website, please contact us by email – [email protected]. The content will be deleted within 24 hours.
bigLakersnews updatePlaypreseasonrushsports newssports update
Share

Dhoni will be remembered as one of the greatest finishers the game has ever: DC coach Ricky Ponting