Notice: amp_is_available was called incorrectly. `amp_is_available()` (or `amp_is_request()`, formerly `is_amp_endpoint()`) was called too early and so it will not work properly. WordPress is currently doing the `pre_get_posts` hook. Calling this function before the `wp` action means it will not have access to `WP_Query` and the queried object to determine if it is an AMP response, thus neither the `amp_skip_post()` filter nor the AMP enabled toggle will be considered. It appears the theme with slug `publisher` is responsible; please contact the author. Please see Debugging in WordPress for more information. (This message was added in version 2.0.0.) in /home/runcloud/webapps/techilive/wp-includes/functions.php on line 5313
 Lakers struggle while Suns overcome Chris Paul injury to win Game 1 - TechiLive.in 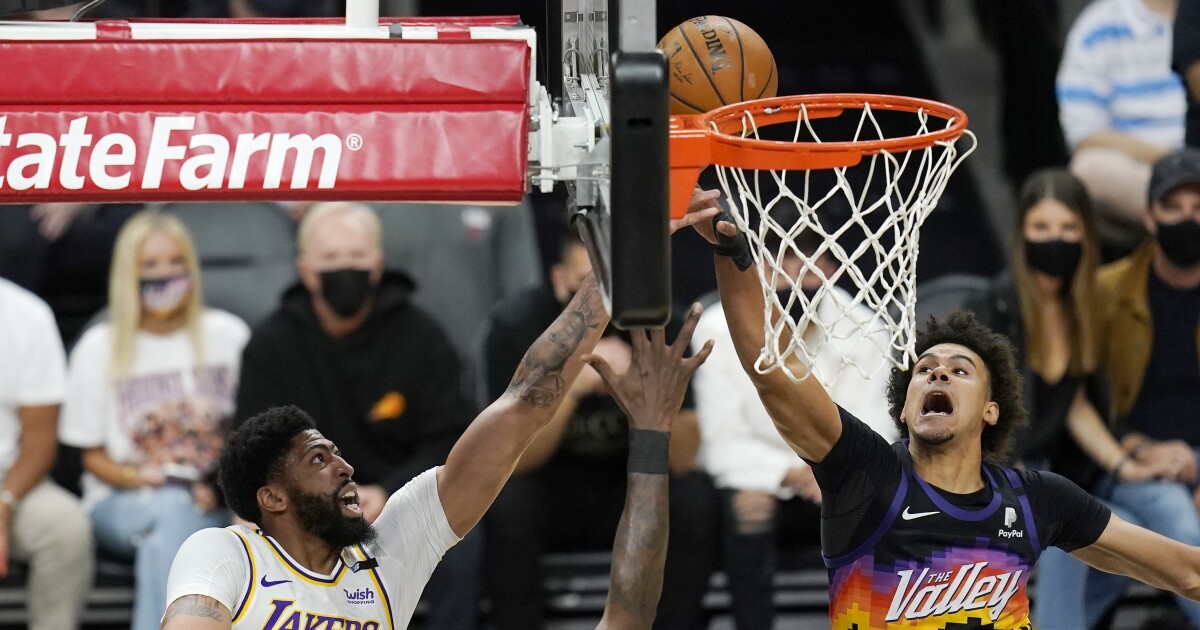 Easy wasn’t going to be an option.

The Lakers, seemingly underdogs in seeding only, got outplayed by the hungry Phoenix Suns in a 99-90 loss to open their first-round series on Sunday.

The Lakers will have a chance to even the series against No. 2-seeded Phoenix on Tuesday.

Chris Paul and LeBron James both were sent to the court with injuries, grabbing at their battered bodies. A scuffle broke out with Suns guard Cameron Payne getting ejected. And chants of “Beat L.A.” echoed inside the Suns’ arena, Phoenix winning its first playoff game since Game 4 of the 2010 Western Conference finals.

Paul left the game in the first half after sustaining a bruised shoulder, stunning the Phoenix crowd into silence.

Players from both teams gathered around the veteran point guard as he was on the court during a timeout, his good friend James helping him to his feet before Paul went to the Suns locker room.

The injury happened on a strange play, with Paul in the air challenging James on a put-back attempt. As Paul landed, his arm connected with teammate Cameron Johnson’s torso, sending Paul to the court in considerable pain.

Suns general manager James Jones followed him into the locker room, and the crowd roared when Paul managed to return a few minutes later.

He favored the arm the rest of the game, opening the door for Devin Booker (34 points) and Deandre Ayton (21 points, 16 rebounds) to carry the Suns to the win.

James hit the court hard in the second half when Paul snuck in front of him after a missed free throw, forcing him to land awkwardly on his left shoulder. In the aftermath of the foul, Payne and Alex Caruso jostled with each other, and Montrezl Harrell got involved in the altercation, with Payne getting ejected after he threw the ball at Caruso.

The drama and emotion provided some cover for the Lakers, who weren’t consistent on defense and largely ineffective on offense.

James led the Lakers with 18 points, Anthony Davis scored only 13 and the team made less than 27% of its shots from three-point range and less than 61% from the free-throw line.

Denial of responsibility! TechiLive.in is an automatic aggregator around the global media. All the content are available free on Internet. We have just arranged it in one platform for educational purpose only. In each content, the hyperlink to the primary source is specified. All trademarks belong to their rightful owners, all materials to their authors. If you are the owner of the content and do not want us to publish your materials on our website, please contact us by email – admin@techilive.in. The content will be deleted within 24 hours.
Loading...
ChrisgameinjuryLakersnews updateOvercomePaulsports news
0
Share