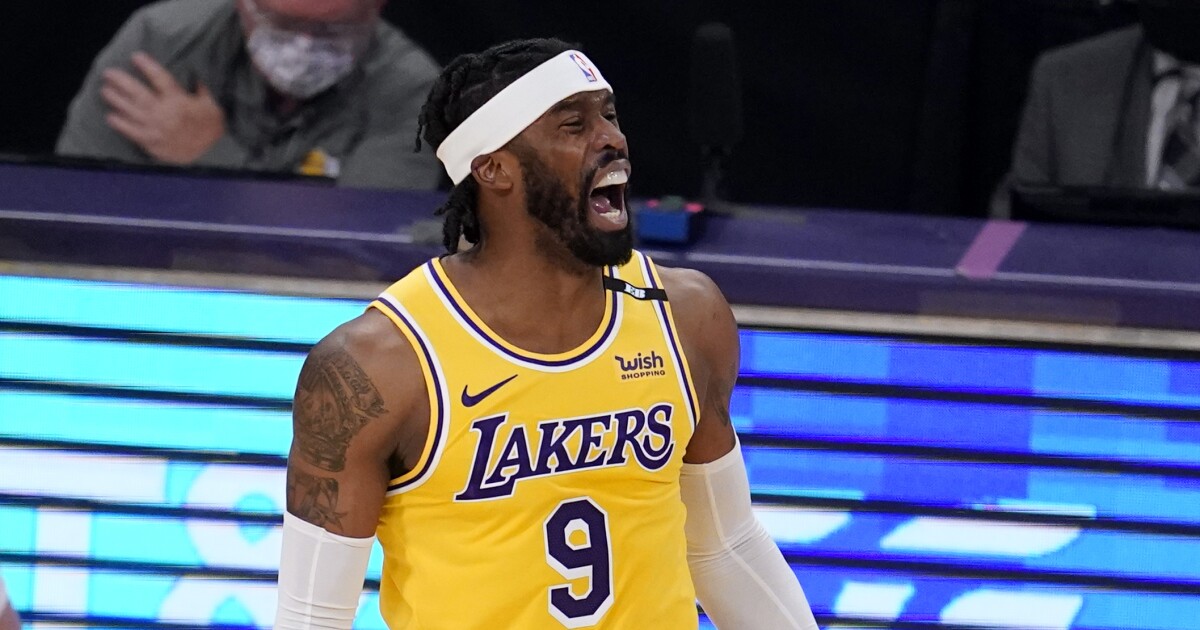 Lakers’ Wesley Matthews is ready for a larger role if needed

Wesley Matthews played 11 minutes 3 seconds in the fourth quarter of Game 3 for the Lakers on Thursday night, his involvement increasing because of a left quadriceps bruise starting guard Kentavious Caldwell-Pope suffered in the third quarter.

So, with Caldwell-Pope listed as questionable for Game 4 in the best-of-seven playoff series against Phoenix on Sunday at Staples Center, Matthews was asked on a videoconference after practice Saturday whether his role would change.

“I have no idea. I have no idea what it is for me,” Matthews said. “My job is to stay ready for whatever the task at hand is called for. And so, focus on what it is I need to do, get my body right, my mind right, shots up, treatment, lift, all that stuff.

“Everybody is doing the same thing. That’s kind of what this season is almost kind of oddly prepared us for is the unknown. And so, hopefully KCP is back and hopefully he’s at 100%, because obviously we’re a stronger team when we got everybody healthy. But as far as whatever it means for me, I’ll be ready for whatever.”

Matthews was especially ready in the fourth quarter, with his defense on Suns All-Star guard Devin Booker on point and his three-point shooting significant.

His back-to-back three-pointers in the final 12 minutes helped give the Lakers separation as they rolled to a 109-95 victory and a 2-1 lead in the best-of-seven series.

“Well, hopefully KCP’s a go and we continue to keep guys in their normal roles,” Lakers coach Frank Vogel said via videoconference. “But Wes has played really well, really provides that toughness, edginess, chippiness on the defensive end and you need that when you have elite playmakers like we’re going against in Chris Paul and Booker and even the way Cameron Payne’s playing.

“So, you definitely need that. But he’s just another weapon for us to throw out there and help solidify us on the defensive end. And as you saw the other night, Wesley knocked down a couple threes, which helps. Wes is a great two-way player, and whether KCP’s in or not we continue to need him to contribute to this series.”

Their shooting has been, well, horrendous.

Yet the Lakers have won the last two games.

Their three-point shooting in particular has been atrocious.

Yet the Lakers remain confident that their threes will fall at some point in this series.

”Of course, you have to shoot without hesitation, without a conscience. … The bigger picture is you have to continue to focus on shot quality, and that’s what we’re really putting our focus on,” Vogel said. “If we execute better and the quality of shots goes up, the shots will fall. We believe in the numbers. We believe in the shooters we have here. If we execute, we pass better, read better, space better, screen better and all those types of things will just generate higher-quality looks, and we believe that they’ll come around.”

The Lakers are making 35.7% of their field-goal attempts in the series, 27.6% of their three-point tries.

“What it is, is it’s not panic. That’s the biggest thing. That’s for ya’ll to do. For us, we can’t panic,” Matthews said. “… We know that we’ve played basketball for however many years everybody has played basketball. We’ve taken how many thousands, hundreds of thousands of millions of shots and repetitions. Again, there’s no … it’s not time for us to panic.

“We don’t crunch numbers and do all that stuff. We lace our shoes up when we get to work, and, honestly, if we’re going to be in a shooting slump, I’d rather be in a shooting slump and be winning. There’re so many ways to impact the game, and on the defensive end is definitely the most important way to impact the game. Obviously, shooting makes the game easier. But if we’re holding a team like that to 99 and under 100 points, we’re giving ourselves a chance to get hot.”

Loading...
Denial of responsibility! TechiLive.in is an automatic aggregator around the global media. All the content are available free on Internet. We have just arranged it in one platform for educational purpose only. In each content, the hyperlink to the primary source is specified. All trademarks belong to their rightful owners, all materials to their authors. If you are the owner of the content and do not want us to publish your materials on our website, please contact us by email – [email protected]. The content will be deleted within 24 hours.
LakerslargerMatthewsneedednews updateReadyrolesports news
0
Share