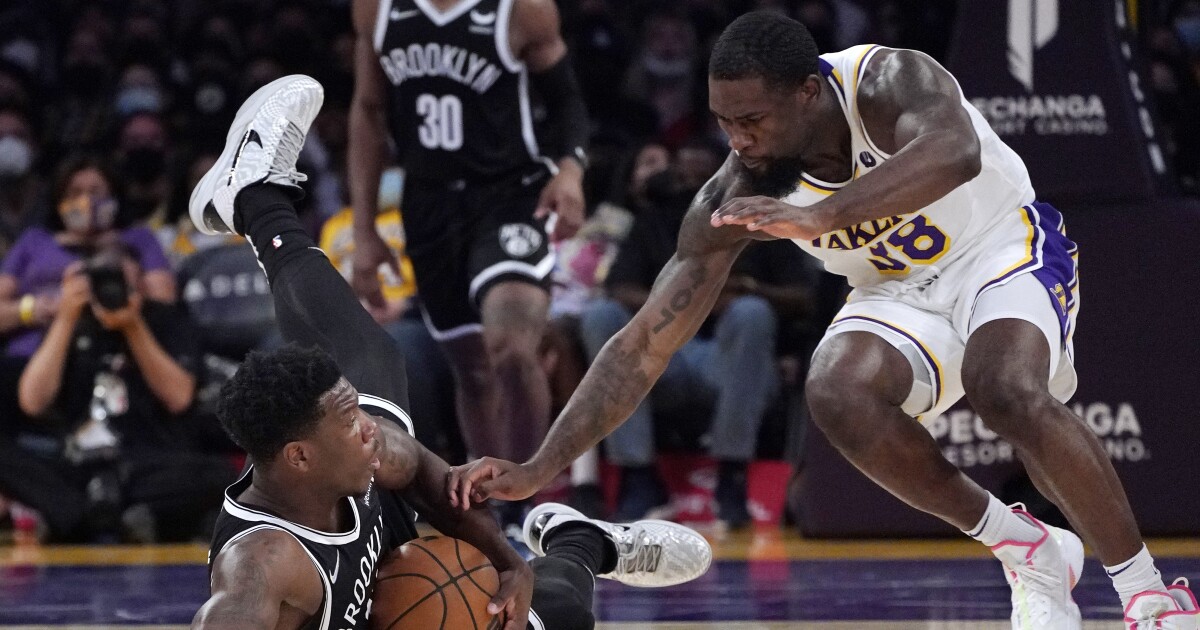 Really. None of them played.

Anthony Davis was the only big name to log court time, playing 11 minutes in the first quarter of a 123-97 loss to the Nets Sunday at Staples Center.

Malik Monk led the Lakers with 15 points and Cam Thomas led the Nets with 21, things almost guaranteed to not happen whenever the two teams meet again in the regular season, and perhaps the NBA Finals.

But even a preseason opener without the biggest names had some of the excitement that will come when, health-willing, they’re all on the court for the Lakers’ season opener on Oct. 19.

The crowd erupted for a Talen Horton-Tucker one-handed slam. They buzzed as Malik Monk got hot and as DeAndre Jordan and Dwight Howard swatted away shots at the rim. And they roared when Anthony Davis There were crumbs of normalcy — the Laker girls were back, there were no capacity restrictions, the courtside seats were filled and Howard fouled everybody.

Howard left the game to a huge roar, fouling out late in the third quarter in a sequence so confusing that he ended up making a free throw that had to be erased — he had already been disqualified with six fouls. For good measure, he added a technical and a flagrant, leaving the court to huge cheers and a laughing hug from DeAndre Jordan.

The game was mostly competitive except for the fourth quarter when the deep end of the Lakers’ bench was outscored 39-16.

Davis, who ended last year injured with groin and knee problems after dealing with an Achilles problem all season, looked healthy in his limited run, scoring the Lakers’ first points on an explosive drive to the basket. He scored six points.

Monk was the biggest revelation Sunday, showing the instant-offense capabilities that have his teammates calling him “Microwave” in the first week of training camp.

Wayne Ellington and Howard each added 11 and Horton-Tucker scored 10 for the Lakers, who play next Wednesday in Phoenix.

Eventually, the Lakers will have Russell Westbrook, LeBron James and Anthony Davis all on the court together, though coach Frank Vogel isn’t in a rush.

“Yeah, I mean, we’re eager. We’re all eager to see it,” Vogel said pregame. “But I’ve been watching it in practice the last few days. So I already know it looks like.

“I don’t have any intention of overdoing the preseason. We have to take it for what it is. It’s an opportunity for a lot of guys to get reps. I really want our main guys to play only as much as they need to to get ready for opening night and nothing more. So I’m eager to see it, but not today.”

Denial of responsibility! TechiLive.in is an automatic aggregator around the global media. All the content are available free on Internet. We have just arranged it in one platform for educational purpose only. In each content, the hyperlink to the primary source is specified. All trademarks belong to their rightful owners, all materials to their authors. If you are the owner of the content and do not want us to publish your materials on our website, please contact us by email – [email protected]. The content will be deleted within 24 hours.
LakersLossnetsnews updatepreseasonputshowsports news
Share

Saints Finally Return Home, to a City That Needed Them