Notice: amp_is_available was called incorrectly. `amp_is_available()` (or `amp_is_request()`, formerly `is_amp_endpoint()`) was called too early and so it will not work properly. WordPress is currently doing the `pre_get_posts` hook. Calling this function before the `wp` action means it will not have access to `WP_Query` and the queried object to determine if it is an AMP response, thus neither the `amp_skip_post()` filter nor the AMP enabled toggle will be considered. It appears the theme with slug `publisher` is responsible; please contact the author. Please see Debugging in WordPress for more information. (This message was added in version 2.0.0.) in /home/runcloud/webapps/techilive/wp-includes/functions.php on line 5313
 LaLiga: Barcelona star Lionel Messi describes Copa del Rey victory as 'very important turning point'-Sports News , Firstpost - TechiLive.in 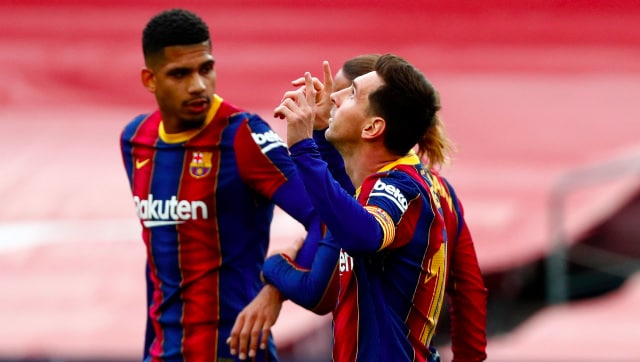 Messi praised the Barcelona dressing room, which he described as ‘very young, with a lot of new players’ and the excitement generated by the 4-0 win over Athletic Bilbao in the Copa del Rey final, Barca’s first trophy in two years.

Buenos Aires: Barcelona forward Lionel Messi described the club’s Copa del Rey win this season as a “turning point”, but gave no indication of his own future in Catalonia in an interview published in the Argentine press on Saturday.

Messi, who was allowed to skip Barcelona’s final LaLiga game on Saturday in order to prepare for the Copa America, is out of contract at the end of June, although negotiations are reported to be ongoing.

The 33-year-old, however, praised the dressing room, which he described as “very young, with a lot of new players” and the excitement generated by the 4-0 win over Athletic Bilbao in the Copa del Rey final, Barca’s first trophy in two years.

“The truth is that the last Copa del Rey was special because of the moment we were in,” Messi told sports daily Ole.

“The club is coming out of two years where we were not good.

“This Copa del Rey was a turning point for the dressing room, and a very important turning point. And beyond that, on a personal level, I like to win and win titles.

“And the more there are, the better it is.”

The Argentine legend has scored 30 league goals this season and is almost guaranteed to finish “Pichichi” — top scorer in La Liga — for the eighth time in his career.

With negotiations still under way, his future at the club he joined as a 13-year-old remains in doubt as he has been linked with a move to Manchester City where he could join up with former coach Pep Guardiola.

If he does not extend, his last match for Barcelona will go down as the 2-1 defeat by Celta Vigo last Sunday which extinguished the Catalans’ hopes of another La Liga title.

Denial of responsibility! TechiLive.in is an automatic aggregator around the global media. All the content are available free on Internet. We have just arranged it in one platform for educational purpose only. In each content, the hyperlink to the primary source is specified. All trademarks belong to their rightful owners, all materials to their authors. If you are the owner of the content and do not want us to publish your materials on our website, please contact us by email – admin@techilive.in. The content will be deleted within 24 hours.
Loading...
BarcelonaCopaDeldescribesFirstpostimportantLaLigaLionel
0
Share

The Avenue 26 night market in Lincoln Heights heats up. Take a look