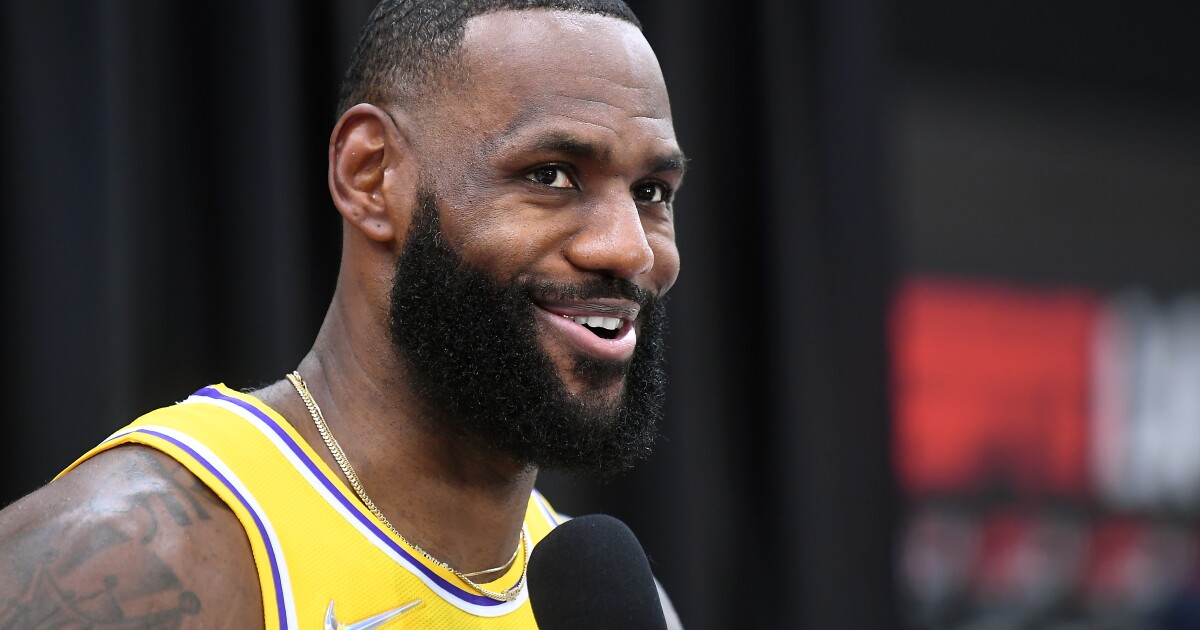 Time — LeBron James never had much of it to begin with. But going into the Lakers’ title defense last season, there was less of it than usual.

There was a movie to film and voter rights issues to fight. That was on top of the normal commitments, the work in his hometown, dealing with his expanding production company and growing media empire. And, with the clock ticking faster than ever, there was a compressed season to play during the pandemic.

A year later, on the heels of an actual offseason with relaxation and a total reset, James has been setting the tone for the Lakers in a pair of early training camp practices, his legendary energy levels apparently restored.

“[It’s] just the energy. Energy alone,” he said. “Just, you know, last year after coming off the bubble, it literally took everything away from you. Any little bit of energy that you had, it was completely gone when we left there. … Guys just didn’t have an opportunity to get a mental break.”

James wasn’t bored this summer. When the cast of your movie is mostly animated, you end up doing a lot of the promotional work. Yet he did have time for family, for friends, for physical and emotional recovery.

He wasn’t out of the gym — James would routinely post videos from 6 a.m. workouts, his bearded mouth rapping along to a booming beat while he broke a pre-sunrise sweat. He even recruited new Lakers to join him, dragging them from their beds for barre workouts.

“He sets a great tone for attentiveness, hanging on every word the coaches are saying and making sure he’s understanding it, executing it at the right level,” Lakers coach Frank Vogel said. “I think that sets a tone for the rest of the guys absorbing what we’re trying to get through to them.

“It starts there. But then, obviously, his overall basketball mind and the experience in our system the last two years. Just like the assistant coaches, every time we implement something, if there’s a detail that needs to be cleaned up, he’s very vocal in those situations too. But I think if his voice is hoarse, it’s because of the intensity of today’s practice.”

Maybe the Lakers would be considered on the verge of burning out if the team didn’t already acquire one of the NBA’s premier energy players in Russell Westbrook.

Westbrook was again praised for his play and his competitiveness, the Lakers getting in live-action work early during their second day of official practice.

“Well, Russell Westbrook’s pretty good. Yeah, he’s a good basketball player,” Vogel said with a smirk that escaped from under his face covering. “He’s good at basketball. His speed, not just in the open court, but downhill driving, paint-attacking nature of his game has really been something else to watch up close in practice the last couple days. I think Lakers fans are gonna be thrilled about what he looks like in the purple and gold. …

“I’m not worrying about how to stop him anymore, so that’s good.”

The worries in the early days of practice have been minimal. Trevor Ariza didn’t practice Thursday because of a sore ankle, but otherwise the Lakers have been at full strength and full attention.

“It’s what greatness is all about,” Rajon Rondo said. “That’s why certain teams … well, every team that he’s played on … has been to the top of the top. When a guy like that is setting a tone, everyone else has to follow, lock in and try to do the same.”

Denial of responsibility! TechiLive.in is an automatic aggregator around the global media. All the content are available free on Internet. We have just arranged it in one platform for educational purpose only. In each content, the hyperlink to the primary source is specified. All trademarks belong to their rightful owners, all materials to their authors. If you are the owner of the content and do not want us to publish your materials on our website, please contact us by email – [email protected]. The content will be deleted within 24 hours.
chaseJamesLakersLeadLeBronnews updateReadyRefreshed
Share

FIFA 22 Review: More Arcade Than Ever