Notice: amp_is_available was called incorrectly. `amp_is_available()` (or `amp_is_request()`, formerly `is_amp_endpoint()`) was called too early and so it will not work properly. WordPress is currently doing the `pre_get_posts` hook. Calling this function before the `wp` action means it will not have access to `WP_Query` and the queried object to determine if it is an AMP response, thus neither the `amp_skip_post()` filter nor the AMP enabled toggle will be considered. It appears the theme with slug `publisher` is responsible; please contact the author. Please see Debugging in WordPress for more information. (This message was added in version 2.0.0.) in /home/runcloud/webapps/techilive/wp-includes/functions.php on line 5313
 Lenovo ThinkPad E14 Gen 2 review: A basic business laptop - TechiLive.in 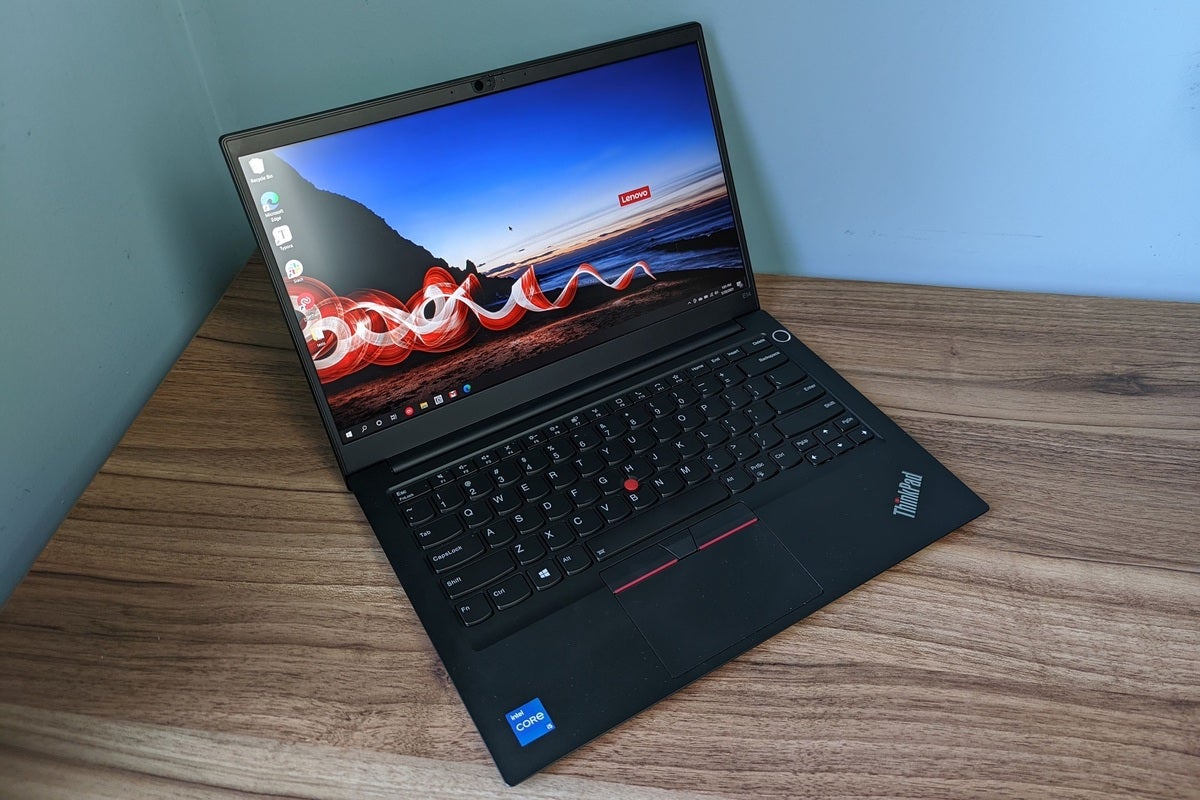 Think of Lenovo’s ThinkPad E14 Gen 2 as the business laptop for the rank and file.

While the C-suite might make off with something sleeker, like the $1,850 ThinkPad X1 Nano, the E14 hews closer to the $1,000 range and makes no attempt to hide its economy-class trappings, relative to fancier ThinkPads. Weighing 3.5 pounds and measuring 0.7 inches thick, it’s one of Lenovo’s heftier business laptops, and its features—which include an ethernet jack and anti-glare screen—are decidedly utilitarian.

Style points aside, the ThinkPad would be a solid laptop if not for its substandard trackpad and below-average battery life. As it stands, it’s a laptop that workers can tolerate, as opposed to one that they’ll truly love.

Our ThinkPad E14 Gen 2 sells for $1,048 on TigerDirect and has the following specs:

Lenovo sells many other variants, including those with Core i3, Core i7, and AMD Ryzen 5 processors, though the company’s website makes pricing difficult to gauge. (The baseline Core-i3 model, for instance, has a list price of $1,249, which is $200 more than what TigerDirect charges for our review unit, but it’s down to $600 in a Memorial Day sale.) Expect to spend in the neighborhood of $1,000 for all but the most basic configuration.

In any case, the lack of discrete GPU and H-Series CPU options puts the ThinkPad E14 squarely in the realm of office-drone productivity laptops—a point that’s emphasized by the rare sighting of an ethernet port on its right side. Lenovo does say that it offers an option for Nvidia GeForce MX450 graphics, but at present it’s not available on the company’s website.

Aesthetically speaking, the E14 is pretty much the quintessential ThinkPad, right down to the trackpoint nub, trio of trackpad buttons, black chassis, and red accents. Its hefty plastic case has no discernible flex, and it meets an array of ruggedness requirements under the MIL-STD 810H standard.

The non-touch display folds down to a 180-degree angle. While its 300-nit brightness level is on the dim side for a higher-end laptop, the matte finish does help counteract glare if you’re computing outside. At maximum brightness, the screen was perfectly legible even with the sun at my back.

Because this is a ThinkPad, you can expect chunky keys with plenty of tactile feedback. And my suspicion with the ThinkPad E14 is that the laptop’s thickness allows the backlit keyboard to be even chunkier.

These are compliments. While some folks might prefer a more lightweight feel, I love the travel on ThinkPad keyboards, and the E14 affords more of it than some other models. The aforementioned X1 Nano, for instance, has less depth, and its keys fall down with a clack, versus more of a soft tactile bump on the E14.

If only the trackpad could keep up. For a 14-inch laptop, the E14 trackpad is on the small side, especially with its dedicated mouse button row on top. The bigger problem has to do with friction. The E14 trackpad just isn’t as smooth as the models on most other laptops in the $1,000-and-up price range, so your finger might get stuck as it’s sliding across the screen.

The ThinkPad E14’s meat-and-potatoes approach extends to its webcam and speakers. The former is a 720p resolution camera similar to those on most other Windows laptops, while the latter produce audio that’s reasonably loud but lacking in high-end crispness. With a pair of 2-watt speakers mounted on the laptop’s undercarriage, their Harman Kardon branding and custom Dolby tuning can only do so much.

Lenovo does have its security bases covered, though. A fingerprint reader is built into the power button along the ThinkPad E14’s right side, and the camera supports Windows Hello so you can sign in with just your face. Like other higher-end Lenovo laptops, the E14 also has a physical camera privacy shutter that shows a red dot when it’s covering the lens.

Also worth noting: Lenovo’s Vantage software has some useful customization features. You can swap the Function and Ctrl keys without a trip to BIOS, tweak the camera’s brightness and contrast levels, and set a maximum charge threshold (to prevent battery wear if it’s plugged in most of the time). Lenovo even lets you customize the F12 key to launch specific apps, websites, or keyboard commands.

As a business laptop with an Intel Core i5-1135G7 processor, the Lenovo ThinkPad E14 delivers pretty much what you’d expect on the performance front, through its battery life and graphics are both letdowns.

Let’s start with PCMark 10, but keep in mind the chart below is slightly deceiving. We don’t often get Core i5 laptops from vendors, so a few of the laptops in our comparison run Core i7 chips instead. We’d expect those more powerful chips to fare better in PCMark, but the ThinkPad E14 didn’t fall too bar behind with a score of 4,578. Compared to the Core i5 chips in HP’s Envy 14 and Microsoft’s Surface Pro 7+, Lenovo’s laptop fell somewhere in between.

Perhaps more surprisingly, the ThinkPad E14 came in closer to the top in our HandBrake test, which involves encoding a large video file. Because this test puts laptops under sustained, heavy loads, it’s a good measure of endurance. The E14’s bulky enclosure likely gives it more room to dissipate heat compared to some slicker and slimmer Core i7-powered laptops.

The ThinkPad E14 also turned in a solid performance in Cinebench, which is HandBrake’s opposite—a quick test of both single- and multi-threaded performance.

Unfortunately, the same wasn’t true in our battery rundown test, where the ThinkPad E14 lasted through 10 hours and 48 minutes of looping video playback. While the ThinkPad E14 doesn’t have any obvious battery-draining features, the battery itself is on the small side, with a full charge capacity of 45,730 Whr. We frequently see laptops in the 50,000- to 60,000-Whr range, and they predictably get much better battery life. The E14 may fall short of a full work day. The good news is that it can charge back to 80-percent capacity in about an hour.

The ThinkPad E14 isn’t a great option for gaming, not surprisingly. Even if you could convince your IT manager to let you install Steam on this laptop, its Time Spy score of 1,082 falls well below that of other laptops with Iris Xe graphics.

A laptop with no surprises

With the ThinkPad E14 Gen 2, you know exactly what you’re going to get. It’s a basic business laptop with a solid selection of ports, decent productivity performance, and a basic anti-glare screen. Its most exemplary feature is its keyboard, but that’s counterweighted by a disappointing trackpad and middling battery life. The rank and file could do worse, but they could also probably do a bit better as well.

Loading...
Denial of responsibility! TechiLive.in is an automatic aggregator around the global media. All the content are available free on Internet. We have just arranged it in one platform for educational purpose only. In each content, the hyperlink to the primary source is specified. All trademarks belong to their rightful owners, all materials to their authors. If you are the owner of the content and do not want us to publish your materials on our website, please contact us by email – admin@techilive.in. The content will be deleted within 24 hours.
basicBusinessE14gadget updateGenlaptopLenovoreview
0
Share