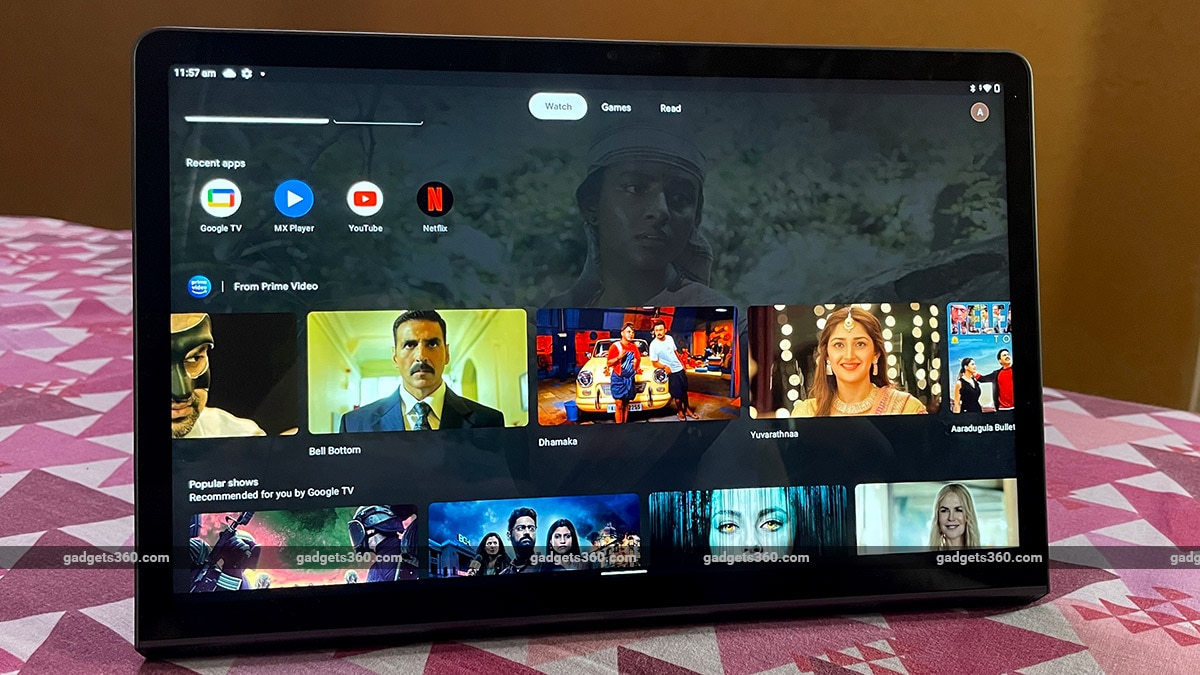 While the Android smartphone market has been growing at a rapid pace, the same can’t be said about tablets. There are very few manufacturers still focussed on the tablet market, severely limiting your options Lenovo, has recently introduced its Yoga Tab 11, pitching it as an entertainment tablet for the family. It has a built-in kickstand, quad JBL speakers, and a 2K display. While all these features look good on paper, what is it like to use this tablet in real life? I put the new Lenovo Yoga Tab 11 to the test to find out if it’s worth your money.

The Lenovo Yoga Tab 11 is available in a single configuration with 4GB of RAM and 128GB of storage. It’s also only available in one colour, called Storm Gray. Lenovo has set Rs. 40,000 as the MRP of this product, but it has been retailing for Rs. 29,999 in India.

The Lenovo Yoga Tab series has a unique design, and this new model looks like an open book folded over from the side, just like many of its predecessors. While holding the tablet in landscape mode, the cylindrical element is at the bottom, and in portrait mode, it can help with grip in either hand. This cylindrical element has a mesh design and houses two speakers. You will also see an integrated kickstand at the back. This is quite handy, considering that many other tablets need an aftermarket accessory or case to be able to stand upright. You can set the kickstand at a wide range of angles, which makes it convenient to use the Yoga Tab 11 on a table.

The right side has a USB Type-C port, along with the power and volume buttons. Lenovo has added a textured finish to the power button which makes it easy to distinguish from the volume buttons. This tablet also has a Nano-SIM slot for cellular connectivity. There are two more speakers (one on either side), which takes the total count to four. You’ll find two microphones at the top, near the 8-megapixel selfie camera. The big 11-inch display has uniform bezels all around; these aren’t too big but are enough to be able to hold the tablet without touching the screen.

At the back, the Yoga Tab 11 has a fabric material for the top half section while the bottom half is plastic. The fabric section also houses the single 8-megapixel camera. This tablet weighs around 650g and the weight is definitely noticeable when you pick it up.

Lenovo has packed in a big 11-inch display with a resolution of 2000×1200 pixels. It is an IPS TDDI panel with a brightness of 400 nits, and support for Dolby Vision. The Yoga Tab 11 is powered by the MediaTek Helio G90T processor and has 4GB of RAM. It also has 128GB of storage, which is expandable using a microSD card. Internationally, Lenovo does offer an 8GB RAM variant with 256GB of storage, but that isn’t available in India.

You also get 4G LTE connectivity, and there is support for Bluetooth 5.2 and Wi-Fi. Lenovo has gone with a 7,500mAh battery for the Yoga Tab 11, and you get a 20W charger in the box.

The Yoga Tab 11 runs Android 11 with very few customisations by Lenovo. It was running the July Android security patch at the time of this review, which is dated. You get a few Google and Microsoft apps preinstalled, along with Netflix. Google’s new Entertainment Space and Kids’ Space apps are also available on this tablet.

You can simply swipe right from the home screen to access Entertainment Space, which has three tabs labeled Watch, Games, and Read. The Watch section pulls up content from all supported apps so that you can narrow down what you want to watch without going through individual apps. Youtube and Amazon Prime are available while Netflix is missing here. The Games tab gives you shortcuts to launch preinstalled games and you’ll see recommendations for other games from the Play Store. The Read tab has recommendations for content from Google Play Books.

Lenovo has gesture navigation enabled by default, but you can choose to use the standard three-button navigation layout instead. The tablet wakes up the display when it detects a face.

Lenovo’s UI looks clean and is smooth to use. I did not notice any lag while using the Yoga Tab 11. App load times were acceptable and I could multitask between a few apps without issues, though occasionally a few reloaded on being opened, which meant they hadn’t stayed in memory in the background. The Lenovo Yoga Tab 11 supports face recognition using the selfie camera. This barely worked, and I had to punch in the code to unlock the tablet quite often.

All the buttons are on right, along with the USB Type-C port

The display had good viewing angles and the brightness was more than adequate indoors, in my experience. Users can tweak the colour output and the colour temperature of the panel. The quad speaker system with Dolby Audio was loud enough to fill a tiny room, and managed to produce decent bass too. The stainless kickstand might not look appealing at first but it offers a lot of convenience when watching videos. I could prop this tablet up at different angles while it was placed on a table and even on a bed. Those looking for a tablet primarily for entertainment will be happy with the Yoga Tab 11.

I loaded up Battlegrounds Mobile India on the tablet to see how it handles gaming. I could play the game at the HD graphics and High frame rate settings without any lag or stutter. This big tablet is not the most comfortable device to play on, though. After 23 minutes, I noticed a six percent drop in the battery level which was acceptable.

The Yoga Tab 11 has an 8-megapixel primary camera and an 8-megapixel selfie camera. I wasn’t expecting a feature-rich camera app, and so I wasn’t surprised that it was basic with only a few shooting modes. What I did like was that the selfie camera has a very wide field of view. This was especially useful for video calls. Photos taken with the Tab 11’s rear camera are strictly average.

You get four speakers on the Yoga Tab 11, and they are powerful enough to fill a small room

Battery life with the Yoga Tab 11 was very good, and it lasted me 3-4 days per full charge. My three hour usage each day consisted of watching YouTube videos, surfing Reddit, and playing casual games. I found idle power drain to be very low, which helps the tablet to last for a long time on a single charge. The supplied 20W charger is capable of charging the Yoga Tab 11 to 25 percent in half an hour and 50 percent in an hour. A full charge took a little over two hours.

The Yoga Tab 11 has launched in India quite soon after the Lenovo Tab P11 Pro (Review), and it caters to a different segment in the market. The Yoga Tab 11 gets the basics right, with a crisp display, powerful speakers, and big battery. While the integrated kickstand might seem like a gimmick, it is quite useful.

For those looking for a tablet for entertainment purposes, the Lenovo Yoga Tab 11 fits the bill quite well. In fact, it also performs well enough to handle occasional gaming. The Galaxy Tab S6 Lite (Review) could be an alternative at roughly the same price, and also comes with a stylus. If you are in the Apple Ecosystem, you should also consider the Apple iPad (9th Gen).

Denial of responsibility! TechiLive.in is an automatic aggregator around the global media. All the content are available free on Internet. We have just arranged it in one platform for educational purpose only. In each content, the hyperlink to the primary source is specified. All trademarks belong to their rightful owners, all materials to their authors. If you are the owner of the content and do not want us to publish your materials on our website, please contact us by email – [email protected]. The content will be deleted within 24 hours.
entertainergadget updateLenovolenovo yoga tab 11lenovo yoga tab 11 price in indialenovo yoga tab 11 reviewlenovo yoga tab 11 review helio g90t jbl speakers dolby lenovoreview
Share

Compensation and the ‘law of everything’: why data protection isn’t the new PPI

Sania Mirza bids adieu to Wimbledon with semifinal loss in…