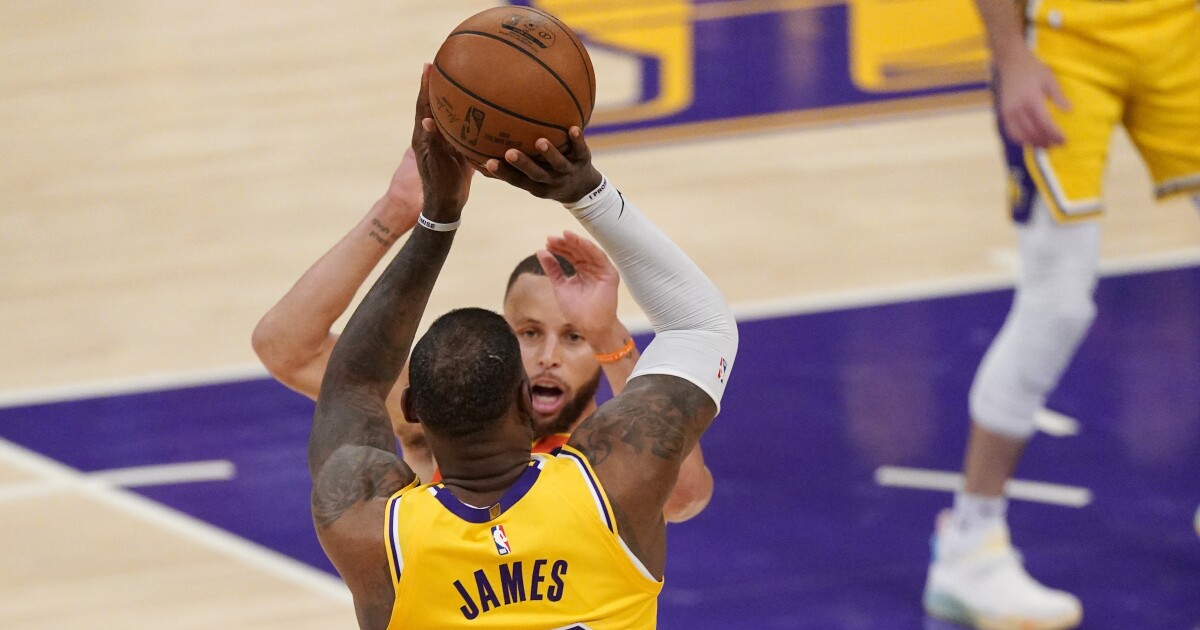 Letters: LeBron’s shot was something to see

LeBron might have seen three basketball rims after getting poked in the eye while making the winning shot against the Warriors, but what I saw in my mind was Kobe making that shot.

Anybody else see the parallel between the injured LeBron James’ play-in game miraculous shot and Kirk Gibson’s 1988 World Series home run? Let’s hope Lakers coach Frank Vogel can pull out his “inner Tommy Lasorda” and have his players ride this moment to another unlikely championship. If we only had Orel Hershiser as our point guard …

Utley and Freeze were mobile, still-excellent fielders and could still play when the Dodgers got them. Albert Pujols is 41, moves like a statue and actually started all this when he balked about being a part-time player. Now suddenly he is a willing part-time player?

When I was younger, the Mets brought back Willie Mays under the same pretenses. An eternal Hall of Famer stumbled around like he was lost and hit .211, almost tarnishing a legacy.

Couldn’t we all agree it is time for Pujols to take his $300+ million and retire gracefully? Or is he just another crowd draw that people pay to see as a curiosity instead of the hitter he once was?

Plaschke, put a sock in it! If he’s lucky the sock won’t be on Pujols’ foot! This was a typical jump-to-conclusion hit job by Plaschke without any real idea what he is talking about. The Dodgers are suffering through a rash of injuries to every part of their roster. Making a simple deal on a player who has a proven track record and getting him out of a situation that was going from bad to worse with the Angels may be a stroke of genius by the Dodgers? Who knows? Only time will tell.

To call Pujols a malcontent who will disrupt the clubhouse is unnecessary, but what else can we expect from a writer who makes predictions that never come true and is the kiss of death when he makes them.

In his column questioning the wisdom of the Dodgers’ signing of Albert Pujols, Plaschke obliquely raises another, possibly more interesting, question when he asserts that “…nobody (on the Dodger club) openly complains about playing time.” Does that mean there are players who are complaining about playing time and possibly other issues but not for publication? Please, Bill, tell us. Inquiring minds need to know.

From a purely financial perspective, the Dodgers would be better served in committing Pujols’ $570,500 salary to increased security, so as to prevent additional parking lot brawls like the recent fight that erupted at their April 27 game.

Before the season started, the fans were told that the Dodgers had so many good starting pitchers that they were contemplating a seven-man rotation (while Early Wynn was rotating in his grave). Wha’ happened? Yesterday (May 16), they pitched a “bullpen game.” As usual in these games, the first syllable is appropriate, the second needs to be tweaked.

The Dodgers did it again, 10 strikeouts against the Marlins last Saturday night. But are we going back to Jack in the Box? No, not after paying almost $7 for two large drinks. And the “burgers” I would compare to the silver dollar size some company came out with a while back. Not even their proudly advertised bacon was in them, and very dry. When you tout something, make sure it is your best effort.

Dylan Hernández’s comment about the Dodgers battling both the Padres and the Giants made me laugh out loud.

Let’s see how the overachievers from the North are doing in August — not a quarter into the season with two journeyman pitchers sure to drop out of the Cy Young race and back to their norms and/or the IL long before that.

Anyone think Anthony Rendon wants to reconsider the Hollywood lifestyle?

Keep the cheers down

I’m not a huge baseball enthusiast, and I think the sport is justifiably criticized for games that are too slow-paced and too long. But Shohei Ohtani is a must-see athlete who is so extraordinary that he transcends the sport. So I definitely tune in much more now to watch him pitch and hit, with equal excellence in both roles. He has generational talent, style and presence that has attracted fans from other markets and teams, not just devoted Angels fans.

I’m less thrilled with the TV broadcasts these days. The Shohei Ohtani phenomenon is great enough without the overdose of cheese. I’m all for emotion in a broadcast, as long as it’s genuine, and expect some rah-rah attitude by the home team’s broadcast team. But there are times when even that team spirit is excessive and cloying.

I wish the broadcasters would rein it in a bit, focusing on the key details and educating the viewers while also infusing the game with a decent amount of enthusiasm.

MLB continues to drive itself in the wrong direction.

More than 50% of all teams are having a losing season

Most strikeouts in baseball history: 40% of all players strikeout 33% of their at-bats

Most pitchers ever with an ERA below 2.00

Lowest batting averages in more than 100 years: Average is .231 among the 210 starting players with more than 75 players batting below .220

A relief pitcher must pitch to a minimum of three batters

The game is moving in the wrong direction and until MLB gets a commissioner who is innovative and focused on the quality of the game, MLB will simply continue to strike out.

Regarding “The worst loss of Gregg Popovich’s life:”

What a well-researched and beautifully written piece by Chris Ballard that featured the rather inauspicious beginnings of Gregg Popovich’s coaching career. Having captained Les Nagler’s first Pomona team in 1964, I can verify that he was a wonderful gentleman; however, it sure would have been great to play for Pop, trash buckets in the gym corners or not. Regardless of the win-loss record, there is no doubt that Coach Popovich had a powerful impact on the fortunate members of his first Sagehen team.

I don’t really care that much about basketball, but Chris Ballard’s story about Gregg Popovich and his Pomona-Pitzer team facing off against Caltech, stopping the Beavers’ losing streak at 99 was epic and beautifully written!

Whatever happened to playing for homecourt advantage? The Clippers won’t have it should they face Denver after beating Dallas, which is far from certain. Their intentional loss to New Orleans, claiming a need to rest starters with playoffs a week away, was both embarrassing and shameful.

Quit whining, Frank Vogel, that “it would be nice to have another week or two for guys to really get their legs under them.” Every NBA team purposely rests players by declaring they’re injured and they sit out long after they’re healthy and ready to play. The Lakers did it with James and Davis. The Nets did it with Durant and Harden. Utah did it with Mitchell and Conley. The players love sitting on the bench, pretending to be hurt, while collecting 100% of their pay. There’s no incentive to play during the regular season, or even the playoffs for some guys. Most teams suddenly have all their players back, just in time for the playoffs. “Load management” was a dirty word, so it was replaced with an injury of any kind. This year’s winner for a guarantee of a one month absence was the the sore or pulled hamstring. Out of an abundance of caution, our star will be out until the playoffs start. And he’s fine with that.

Must reading for Kings

Rob Blake, did you read Bill Shaikin’s May 21 article? It included this quote from Farhan Zaidi, the San Francisco Giants’ president of baseball operations: “We’re in the business of trying to sell a compelling product today, not three (or five) years from now . . . competing has always been a priority for us.”

A compelling product. Competing as a priority. Wow, what great concepts, Rob! The Kings certainly don’t embrace them under your leadership.

Try it. Call Zaidi for a primer. Maybe if you follow his lead, the L.A. Times will stop printing short boring AP articles on how the Kings blew another game. Instead, perhaps next season Kings fans will hear from a real live beat reporter, informing us how the team won.

Wow! My Sunday Times had a 12-page tribute to Kobe and an eight-page sports section with two full pages for Popovich and three big stories on Pujols. In 20 pages there was a total of six sentences allotted to women’s sports coverage. Get your priorities straight! You could have used those six sentences to report on some male star’s hangnail.

The Los Angeles Times welcomes expressions of all views. Letters should be brief and become the property of The Times. They may be edited and republished in any format. Each must include a valid mailing address and telephone number. Pseudonyms will not be used.

Loading...
Denial of responsibility! TechiLive.in is an automatic aggregator around the global media. All the content are available free on Internet. We have just arranged it in one platform for educational purpose only. In each content, the hyperlink to the primary source is specified. All trademarks belong to their rightful owners, all materials to their authors. If you are the owner of the content and do not want us to publish your materials on our website, please contact us by email – [email protected]. The content will be deleted within 24 hours.
LeBronsLettersnews updateShotsports newssports updatetechi live
0
Share

TikTok, the Fastest Way on Earth to Become a Food Star

A chill Fed, cool inflation, and a long list of reasons not to worry (so far)