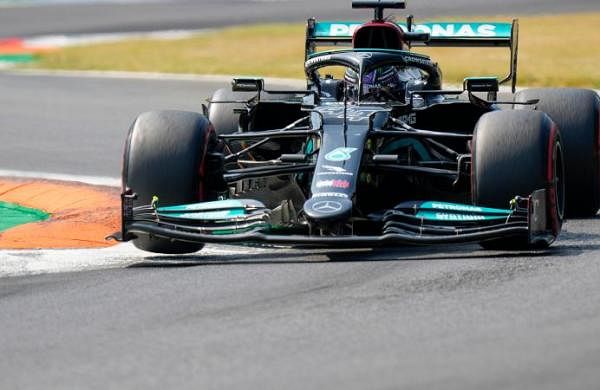 Lewis Hamilton fastest in practice ahead of sprint at Italian GP

MONZA: Formula One champion Lewis Hamilton was fastest in the second practice for the Italian Grand Prix ahead of the return of the sprint later Saturday.

Hamilton was .222 seconds ahead of Mercedes teammate Valtteri Bottas and .416 quicker than championship leader Max Verstappen.

The session was red-flagged for just over 10 minutes after Carlos Sainz Jr. crashed into the wall at Ascari.

The Ferrari driver was able to climb out and has been preliminarily cleared by medical staff but the team faces a race against time to get his car ready for the sprint later.

Sainz is due to start in seventh at the Italian team’s home circuit.

There were problems for Ferrari teammate Charles Leclerc, who won at Monza in 2019.

He pulled into the garage early with an issue which he didn’t want to explain over the radio.

Hamilton will start the 18-lap dash at the Temple of Speed in second place, just behind Bottas, but ahead of Red Bull’s Verstappen after Friday’s qualifying session.

This is the second sprint qualifying after its debut at Silverstone.

Rather than the standard format of two practices on Friday and a third practice and qualifying on Saturday, there was one practice on Friday followed by a qualifying session that determined the grid for Saturday’s sprint.

The sprints will be over 100 kilometers and the top three finishers will also receive points toward the championship.

Hamilton was fastest in qualifying at Silverstone but Verstappen topped him in the sprint to take pole.

Hamilton is a five-time winner at the Temple of Speed and also has three additional podiums at the track.

In contrast, Verstappen has never set foot on the iconic Monza podium, with a best finish of fifth in 2018.

Denial of responsibility! TechiLive.in is an automatic aggregator around the global media. All the content are available free on Internet. We have just arranged it in one platform for educational purpose only. In each content, the hyperlink to the primary source is specified. All trademarks belong to their rightful owners, all materials to their authors. If you are the owner of the content and do not want us to publish your materials on our website, please contact us by email – [email protected]. The content will be deleted within 24 hours.
Loading...
aheadfastestHamiltonItalianItalian GPItalian Grand PrixLewisLewis Hamilton
Share