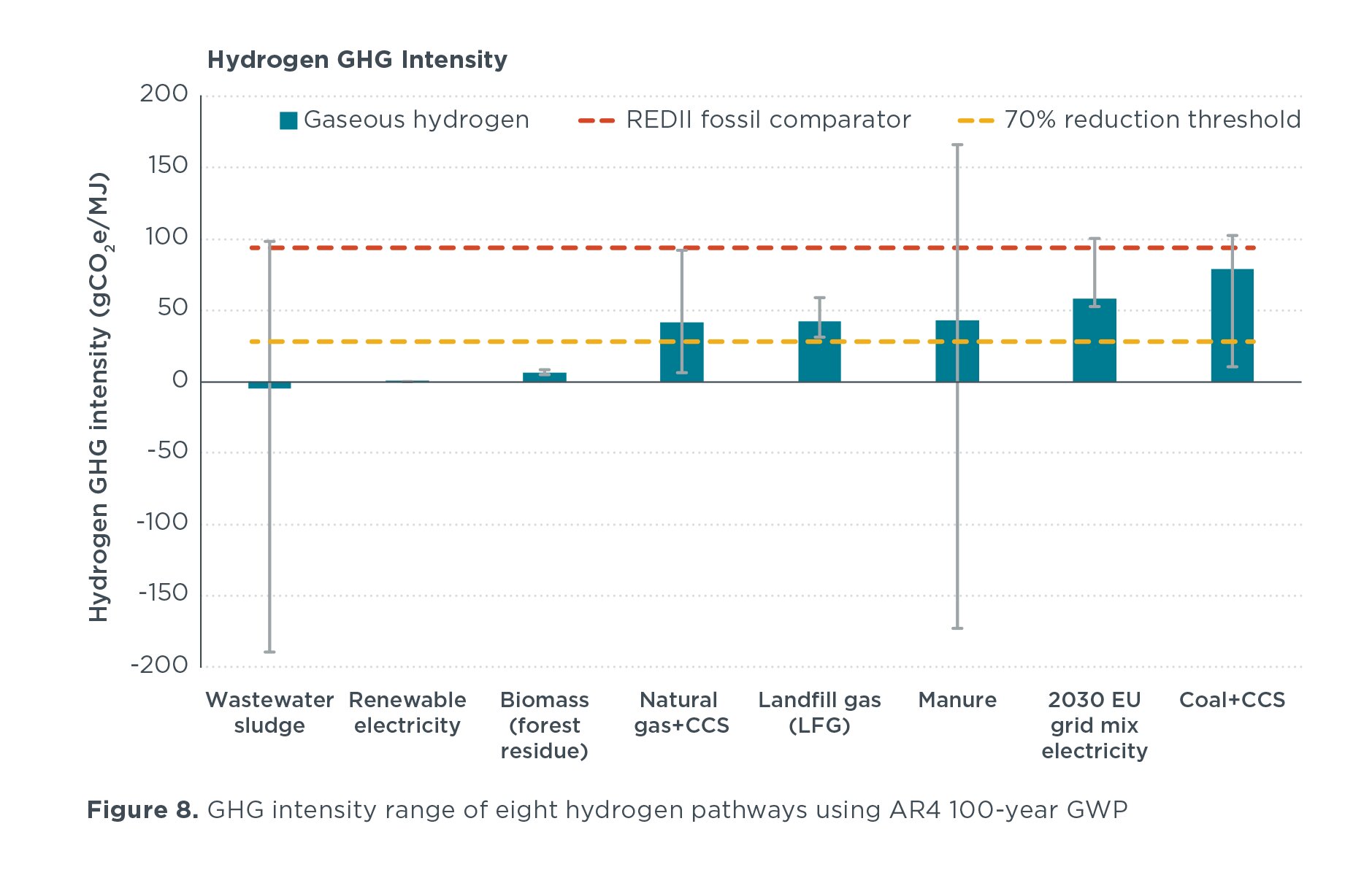 A new life-cycle analysis of potentially low-greenhouse-gas options for producing hydrogen in Europe finds that only hydrogen produced using renewable electricity can be effectively zero-emission, and that hydrogen pathways involving fossil fuels, even with carbon capture and storage, have greenhouse-gas (GHG) intensity high enough to make it unlikely they can contribute to meeting the European Union’s climate targets. The study, from the International Council on Clean Transportation (ICCT), also found that waste-based biomethane production pathways generally have negative GHG intensity, but are subject to significant uncertainties.

The analysis appears as the European Union is revising its Renewable Energy Directive (REDII), which governs development of renewable energy across all sectors of the economy in Europe. The revision is part of the EU’s “Fit for 55” package of measures to deliver on the European Green Deal, the EU’s wide-ranging proposal to drive net GHG emissions down 55% by 2030 and reach carbon neutrality by 2050.

“Hydrogen made from electrolysis powered by renewable electricity is essentially ‘climate-clean’ from production to use,” noted ICCT researcher Yuanrong Zhou. “And it’s the only effectively zero-carbon hydrogen option that could be brought to scale in Europe.”

The analysis found wide variation in the GHG intensity of eight hydrogen production methods in the EU, each of which used different feedstocks or processes. Some of the hydrogen pathways involve first producing biomethane and then converting it to hydrogen. The modeled pathways, from lowest to highest in GHG intensity, are wastewater sludge biomethane, renewable electricity, biomass gasification, natural gas combined with carbon capture and storage (CCS), LFG biomethane, manure biomethane, 2030 EU grid electricity, and coal with CCS. GHG intensity is measured as GHGs emitted per unit of energy produced.

Only three of these pathways meet the 70% GHG reduction threshold (compared to petroleum) required for hydrogen in the REDII: Wastewater sludge, renewable electricity, and forest biomass residue (see figure). The highest GHG intensities among the eight pathways modeled were hydrogen produced from coal plus CCS and hydrogen from 2030 EU grid electricity. These do not meet the 70% GHG reduction requirement.

The impact of production processes on GHG intensity is clear in the study: hydrogen produced from electrolysis powered by solar and wind energy has a much lower GHG intensity than when the electricity for electrolysis comes from the projected EU 2030 energy mix.

The study found that production based on wastewater sludge scored low in GHG intensity. But sludge is not a reliably low-GHG option for hydrogen production because of the risk of methane leakage over its life cycle. Because methane is a powerful greenhouse gas with a significant effect on climate, even small leakages in the production phase can offset the potential climate benefits of using hydrogen. In fact, the study highlights the high climate risk of any hydrogen production option that relies on methane (the natural gas and biomethane pathways), due to the risk of leakage.

“Policymakers should look carefully at the greenhouse gas profiles of options for producing and using hydrogen,” said Zhou. “Some options that appear promising may actually harm the climate unless processes across their life cycle work perfectly—which is rarely the case.”

The study urges EU policy makers not to add fossil-based hydrogen as an eligible pathway in the RED II revision or incentivize it in any other policies. Instead, EU policymakers should adopt rules for the RED II requiring that electrolysis hydrogen be produced from genuinely additional renewable electricity. It also recommends that policymakers use rigorous and transparent life-cycle analysis for evaluating hydrogen production pathways. These recommendations will help ensure that EC policy only supports gas pathways consistent with a vision of deep decarbonization.

More information:
The study titled “Lifecycle greenhouse gas emissions of biomethane and hydrogen pathways in the European Union” is available at theicct.org/publications/lca-b … ne-hydrogen-eu-oct21

Denial of responsibility! TechiLive.in is an automatic aggregator around the global media. All the content are available free on Internet. We have just arranged it in one platform for educational purpose only. In each content, the hyperlink to the primary source is specified. All trademarks belong to their rightful owners, all materials to their authors. If you are the owner of the content and do not want us to publish your materials on our website, please contact us by email – [email protected]. The content will be deleted within 24 hours.
biomethaneEmissionsEuropeangadget updategasgreenhousehydrogenLifecycle
0
Share

As the Great Resignation accelerates, execs scramble to address the labor shortage

The Problems With Servant Leadership