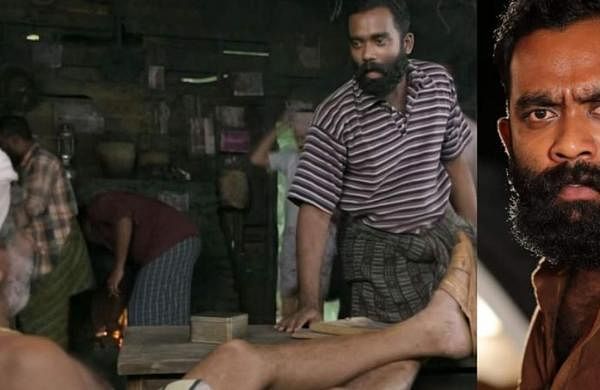 One of the notable acting appearances that caught my attention this week is that of actor Sajin Gopu, who had not one but two releases: Churuli on OTT (SonyLIV) and Jan-e-Man in theatres. While his screentime in Churuli is shorter when compared to his more significant presence in Jan-e-Man, the actor managed to impress in both regardless.

His scenes with Chemban Vinod Jose and Vinay Forrt in the opening and climactic portions of Churuli and his comical interactions with actor Sarath Sabha in Jan-e-Man have become a talking point on social media. Well, now we know his name.

Interestingly, both characters required Sajin to be sufficiently intimidating and exhibit a behaviour change after a certain point. In Jan-e-Man, however, the character turns out to be endearing despite his occupation as a local thug who happens to be Joymon’s (Basil Joseph) friend.

Though both films mean so much to him, he calls Churuli a “turning point” because of one man: Lijo Jose Pellissery. “Being part of his films is on the bucket list of many actors right now, even the big names,” says the Kochi-based actor, who comes from a strong theatre background.

Though it may seem minor on the surface, it’s Sajin’s character who kicks off the film’s main events when he takes the main characters to the nightmarish titular location in Churuli and eventually provokes the ire of Joju George’s character in the climax.

But it was no easy feat for Sajin, who had to engage in heavy multi-tasking: manoeuvring a jeep on the harsh off-road terrain in Kulamavu, Idukki; staying in character; ensuring that the expensive camera mounted on the jeep didn’t hit any trees without looking at it, and being mindful of his passengers (Vinay Forrt and Chemban Vinod Jose).

“If I checked the camera position, I would be looking at it directly. Moreover, I shouldn’t look worried because I’m supposed to be playing someone who used to drive in that terrain for a long time. I’m supposed to look happy,” he adds.

Churuli completed filming in 19 days. Sajin attributes the quick pace to Lijo’s unique working style. “The technical crew members who worked with him used to tell me that until Double Barrel, Lijo chettan used to follow a pre-planned approach but changed his style after. In Churuli, for example, we did some things on the spot. Before my first scene (with Chemban and Vinay), I had memorised all my lines the previous day, but when I went to the set, Lijo chettan told me not to say any of those lines. He wanted me to say something else. I was perplexed! Fortunately, I somehow managed it. I did everything as he said, and, you know what, he was right!” he laughs.

“Sometimes, he used to blend 2-3 scenes to turn it into a single scene. It may not be what’s on the page. He is making all the calculations internally. It’s impressive how he comes up with instantaneous ideas, like the climax where the group decides what to do with Vinay and Chemban. Sometimes the new dialogues are worked out with S Hareesh (scenarist, author),” he says.

The other challenge for the team was avoiding leeches. “Before putting up the shop set (run by Jaffer Idukki’s character), we covered the area with around 200 kilos of salt to ward them off. The place was full of them,” he recalls.

Since social media and television are abuzz with debates on the inordinately profane language in Churuli, I ask Sajin for his two cents. “Well, I see it as free publicity. We don’t have to put up any promotional posts. These people are doing that for us. As for Lijo chettan, he isn’t concerned. He has already started working on his next film (Nanpakal Nerathu Mayakkam, with Mammootty),” he says.

It was the first trailer of Churuli that landed Sajin at Jan-e-Man director Chidambaram’s doorstep. “That was a completely different experience from Churuli. We followed the screenplay to the T. I was initially nervous about working with senior actors like Lal. But we all got along like a house on firem,” he says.

Sajin once got a small taste of direction when he made a three-minute short film called Mootta. But he tells me he has no plans to direct a full-length feature anytime soon. He is currently at work on a couple of scripts, though, one of which is gearing up to go on floors soon, with Lijo’s assistant Sanju Jose directing.

Denial of responsibility! TechiLive.in is an automatic aggregator around the global media. All the content are available free on Internet. We have just arranged it in one platform for educational purpose only. In each content, the hyperlink to the primary source is specified. All trademarks belong to their rightful owners, all materials to their authors. If you are the owner of the content and do not want us to publish your materials on our website, please contact us by email – [email protected]. The content will be deleted within 24 hours.
ActorActorsbucketChurulientertainment newsEntertainment updateGopuJan e Man
Share