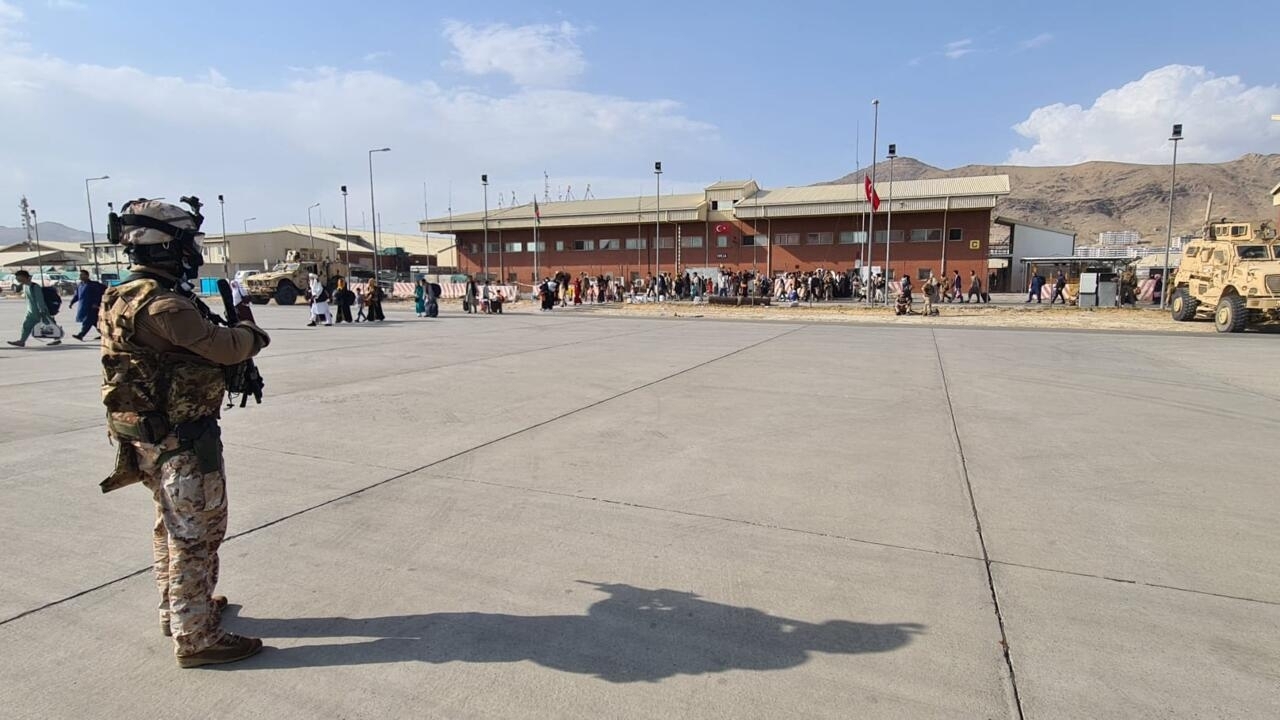 The White House said late Sunday that eight US military flights had evacuated 1,700 passengers from Kabul airport in a 12-hour span and that 39 coalition aircraft had ferried out 3,400 people. President Joe Biden said Sunday he still hopes to finalize the evacuation of tens of thousands from Taliban-controlled Afghanistan by the scheduled deadline of August 31, but ‘discussions’ are under way on a possible extension. FRANCE 24 brings you the latest on the situation in Afghanistan.

This page is being updated regularly.

A firefight broke out between unidentified gunmen, Western security forces and Afghan guards at the North Gate of Kabul airport on Monday, Germany’s armed forces said, as thousands of Afghans and foreigners thronged the airport, seeking to flee Taliban rule.

One Afghan guard was killed and three others were injured in the battle, which also involved US and German forces, the German military said on Twitter, without specifying whether the dead Afghan was one of the Taliban fighters deployed to guard the airport.

The airport has been a scene of chaos since the Taliban seized the Afghan capital on August 15 as US and international forces try to evacuate their citizens and vulnerable Afghans.

In a statement late Sunday, a White House official said eight US military flights — seven C-17s and one C-130 — evacuated about 1,700 passengers from Hamid Karzai International Airport in a 12-hour period ending at 3pm EDT (1900 GMT). In addition, 39 coalition aircraft took off with approximately 3,400 passengers, the official said.

Since August 14, the US has evacuated and facilitated the evacuation of about 30,300 people on military and coalition flights, the official said. Tens of thousands of people remain to join the airlift, which has been slowed by security issues and US bureaucracy hurdles.

On Saturday, 3,900 Americans were flown out of Kabul on 23 US military flights, US President Joe Biden said Sunday.

“We see no reason why this tempo will not be kept up,” the president said. The US military says it has the capacity to fly 5,000 to 9,000 people out of Kabul per day.

US President Joe Biden said Sunday he still hopes to finalize the dramatic evacuation of tens of thousands of people from Taliban-controlled Afghanistan by August 31, as the Islamists blamed Washington for harrowing scenes of chaos and despair at the airport in Kabul.

One week after the hardline militant group made a stunning return to power, terrified Afghans kept trying to flee, skeptical of Taliban promises of a softer version of their brutal 1996-2001 rule.

Biden had previously set August 31 as the date to complete the US withdrawal from Afghanistan.

But the United States and its allies have been unable to cope with huge numbers of people trying to get on evacuation flights, leaving Kabul airport in disarray and the European Union warning it may be “impossible” to get everyone out before the deadline.

Speaking in the White House, Biden said his “hope is we will not have to extend”.

But he also said ‘discussions’ were under way among military officials about the possibility of an extension.

“We’ll see what we can do,” he added when asked by reporters what his reply was to foreign leaders asking for more time.

“We have a long way to go and a lot could still go wrong,” Biden said, citing the threat of attacks by the Islamic State group in particular.

He acknowledged the searing scenes at the US-controlled Hamid Karzai International Airport, which have included babies and children being passed to soldiers over razor-wire fences and men clinging to the outside of departing planes.

But he said they were part of the cost of departure.

“There is no way to evacuate this many people without pain and loss and heartbreaking images you see,” he said.

Loading...
Denial of responsibility! TechiLive.in is an automatic aggregator around the global media. All the content are available free on Internet. We have just arranged it in one platform for educational purpose only. In each content, the hyperlink to the primary source is specified. All trademarks belong to their rightful owners, all materials to their authors. If you are the owner of the content and do not want us to publish your materials on our website, please contact us by email – [email protected]. The content will be deleted within 24 hours.
afghanistanAirportAsia / PacificBreaksFirefightGermanHealth newsHealth update
Share

India in England: Virat Kohli is human after all – Farokh Engineer backs India captain to recover from lean patch