Notice: amp_is_available was called incorrectly. `amp_is_available()` (or `amp_is_request()`, formerly `is_amp_endpoint()`) was called too early and so it will not work properly. WordPress is currently doing the `pre_get_posts` hook. Calling this function before the `wp` action means it will not have access to `WP_Query` and the queried object to determine if it is an AMP response, thus neither the `amp_skip_post()` filter nor the AMP enabled toggle will be considered. It appears the theme with slug `publisher` is responsible; please contact the author. Please see Debugging in WordPress for more information. (This message was added in version 2.0.0.) in /home/runcloud/webapps/techilive/wp-includes/functions.php on line 5313
 Lord's Test: Tim Southee, Rory Burns headline hard-fought 4th day as New Zealand build on lead vs England - TechiLive.in 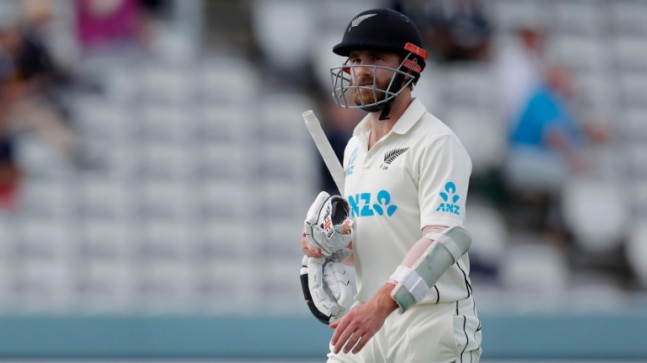 New Zealand stretched their lead to 165 with the help of unbeaten Tom Latham on Day 4 after Tim Southee picked up a six-wicket haul to bowl out England for 275 at the stroke of Tea at Lord’s on Saturday.

New Zealand were on 62/2 with a lead of 165 runs at stumps of the fourth day of the first Test against England at Lord’s in London. Earlier in the day, New Zealand pacer Southee took six wickets while England opener Rory Burns hit 132 on his side’s way to being bowled out for 275 in the first innings.

Burns (132) kept the New Zealand attack at bay while the wickets tumbled at the other end at regular intervals, with four batsmen trudging back to the pavilion after being dismissed for ducks.

The opener led a painful but charmed life – hit on the head twice, thrown a lifeline when wicketkeeper BJ Watling missed a chance to stump him, and dropped by Southee in the slips off Neil Wagner when he was on 88.

England had resumed the day on 111-2 after rain washed out day three and Kyle Jamieson gave New Zealand the perfect start when he dismissed Joe Root with the first delivery of the day.

At one point a follow-on looked distinctly possible, with England far behind on 140-6.

However, Ollie Robinson provided some resistance and nearly marked his debut with a half-century only to fall at 42 when he pulled a short ball to Jamieson at long leg to give Southee his fifth wicket.

Stuart Broad drew a cheer when he smashed the first six of the innings, but he was punished the very next ball when Wagner had him bowled.

Burns was running out of partners, but last man James Anderson frustrated the visitors, and the pair stitched together a 52-run partnership, with Burns reaching his century before becoming Southee’s sixth victim when he was caught behind.

Loading...
Denial of responsibility! TechiLive.in is an automatic aggregator around the global media. All the content are available free on Internet. We have just arranged it in one platform for educational purpose only. In each content, the hyperlink to the primary source is specified. All trademarks belong to their rightful owners, all materials to their authors. If you are the owner of the content and do not want us to publish your materials on our website, please contact us by email – admin@techilive.in. The content will be deleted within 24 hours.
4thbuildburnsDayenglandhardfoughtheadlineLead
0
Share