Notice: amp_is_available was called incorrectly. `amp_is_available()` (or `amp_is_request()`, formerly `is_amp_endpoint()`) was called too early and so it will not work properly. WordPress is currently doing the `pre_get_posts` hook. Calling this function before the `wp` action means it will not have access to `WP_Query` and the queried object to determine if it is an AMP response, thus neither the `amp_skip_post()` filter nor the AMP enabled toggle will be considered. It appears the theme with slug `publisher` is responsible; please contact the author. Please see Debugging in WordPress for more information. (This message was added in version 2.0.0.) in /home/runcloud/webapps/techilive/wp-includes/functions.php on line 5313
 Louis Vuitton blasted for ‘disgraceful’ keffiyeh with Israel flag colours - TechiLive.in 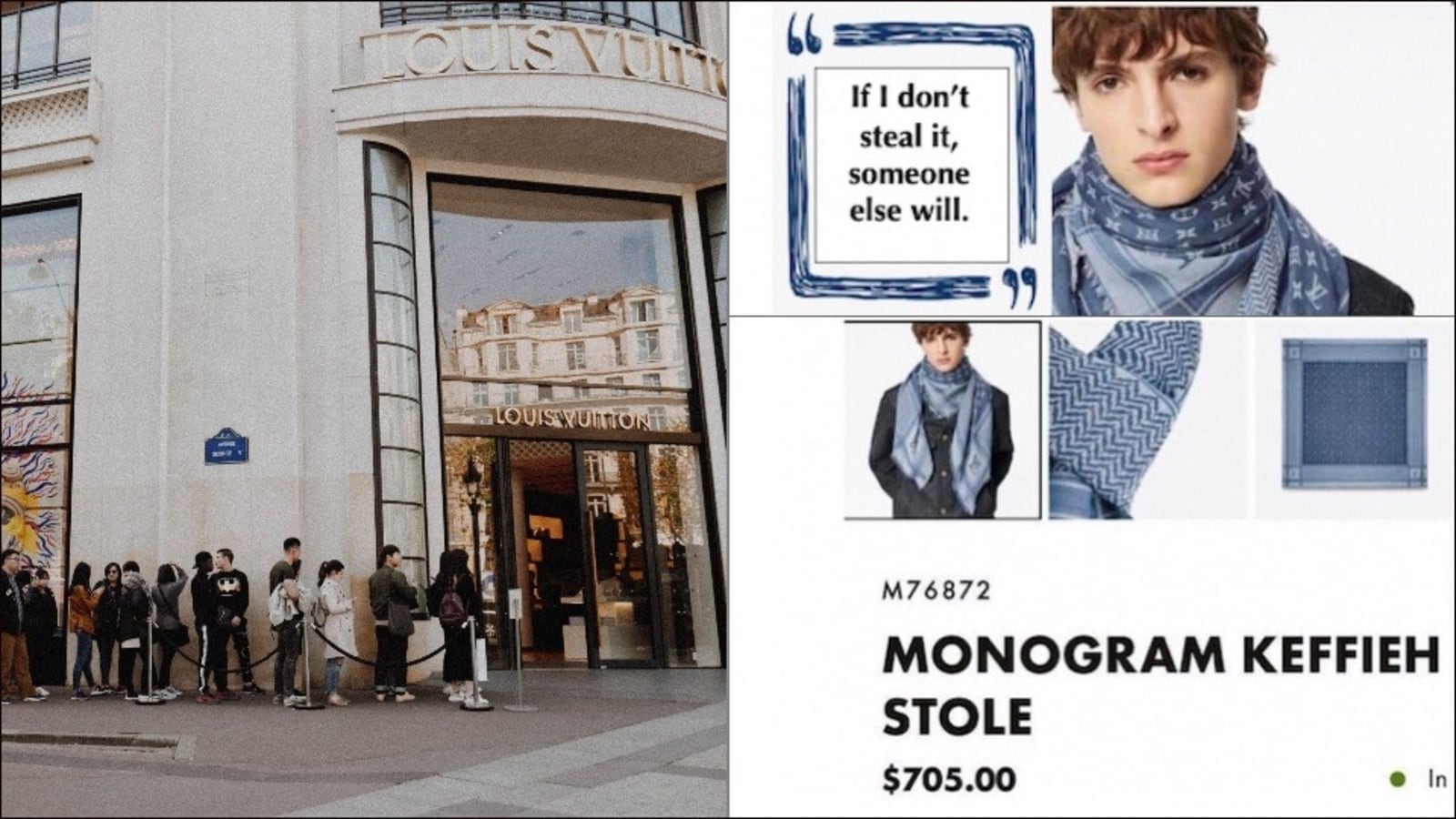 Worn throughout the Middle East region as a traditional Arabian headdress, the thick black and white chequered cloth or keffiyeh has become a symbol of resistance and solidarity in the Arab countries, particularly in Palestine. Signifying the Palestinian quest for self-determination, nationalism and struggle against the occupation of their land by Israel, the keffiyeh garnered widespread popularity courtesy Nobel Peace Prize awardee Yasser Arafat, then leader of the Palestinian Liberation Organisation or PLO, who wore it as the political symbol of resistance against the Israeli occupation and violence since 1948.

Traditionally, keffiyeh is folded diagonally into a triangle and worn draped over the head of rural Palestinian men as a turban or held in place with a circlet of rope called an agal and it rose to popularity further as Kanye West and David Beckham wore it to music festivals or shoots which inspired several high-end and high-street brands. Apart from also being seen loosely draped around the shoulder or fashioned around the necks, especially in recent cases when soccer players from all around the globe took their solidarity straight to the football pitch alarmed by the bloodshed and destruction in Gaza last month, catwalk star Gigi Hadid too was seen wearing it at pro-Palestinian march in Canada.

Bella Hadid & Gigi Hadid being vocal about every time Palestine under attack, they being outspoken. We need more celebrities like them! The world needs them, as good support. #FreePalestine❤? ?? pic.twitter.com/bKyw7gqt8J

French fashion house and luxury goods company, Louis Vuitton, raked up a controversy as it recently released a new Monogram Keffieh stole which is inspired by the classic Keffieh. Enriched with House signatures, a jacquard weave technique is used to create the intricate Monogram patterns on its base of blended cotton, wool and silk while its soft and lightweight with fringed edges makes the timeless accessory create an easygoing mood.

If the whopping price of the keffieh, that is $700, was not enough to spark a widespread outrage, its change of colours from thick black and white to blue and white which is also the colour of Israel’s flag, drew massive flak. Taking to their respective Twitter handles, the netizens blasted LVMH for cultural appropriation.

It soon gave birth to memes that carried the infamous explanation “if i don’t steal it someone else will”, by an Israeli settler who recently went viral for trying to take over a Palestinian’s house illegally. While one accused, “profiting off the oppressed people of Palestine is beyond disgraceful @LouisVuitton why don’t you speak up about the genocide & ethnic cleansing of the Palestinian people (sic),” another tweeted, “@LouisVuitton is politically neutral when it comes to Palestine & Israel, but they’re totally cool w/ making money off the keffiyeh. There better be plans on donating the proceeds to Palestinian victims (sic).”

@LouisVuitton is politically neutral when it comes to Palestine & Israel, but they’re totally cool w/ making money off the keffiyeh.
There better be plans on donating the proceeds to Palestinian victims. pic.twitter.com/vLbH1iEPO3

Where there is ? involved Culture and Religion are of No consequence to these people selling the Keffiyeh as per Louis Vuitton has done !
It is yet another slap in the face to the Palestinian ?? people by Israeli and their Supporters !
???✊??? https://t.co/cskpKJzVLs

This is however, not the first time that a fashion brand has been called out for cultural appropriation. In 2016, Israeli brand Dodo Bar Or triggered a public outcry for using the keffiyeh fabric to make “sexy dresses, flouncy skirts, hippy draping gowns”. Cultural appropriation is controversial when members of a dominant culture appropriate from minority cultures without any benefit to them.

Loading...
Denial of responsibility! TechiLive.in is an automatic aggregator around the global media. All the content are available free on Internet. We have just arranged it in one platform for educational purpose only. In each content, the hyperlink to the primary source is specified. All trademarks belong to their rightful owners, all materials to their authors. If you are the owner of the content and do not want us to publish your materials on our website, please contact us by email – admin@techilive.in. The content will be deleted within 24 hours.
blastedcatwalkcoloursCultural AppropriationDavid Beckhamdessert scarfdisgracefulentertainment news
0
Share

Gold prices hover near 5-month highs as US yields retreat