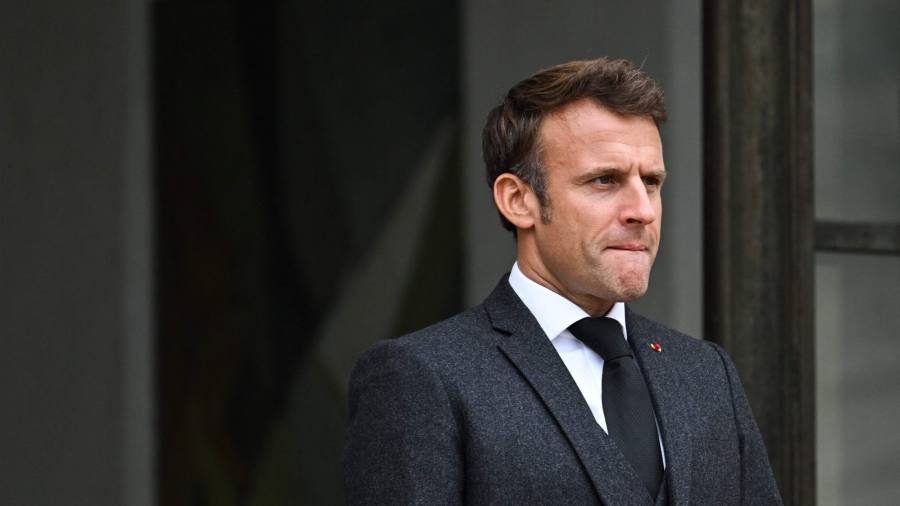 Macron criticised for outlining stance on use of nuclear weapons

French president Emmanuel Macron has faced criticism from within the Nato alliance for stating that France would not respond with nuclear weapons if Russia used its own atomic arsenal against Ukraine or “the region”, which broke with the standard policy of “strategic ambiguity”.

In a France 2 interview on Wednesday evening, Macron said the country’s nuclear doctrine rested on the “fundamental interests of the nation”, which “would not be directly affected if, for example, there was a ballistic nuclear attack on Ukraine, or in the region”.

It is rare for leaders of nuclear-armed countries to spell out explicitly when such weapons would be used because of the decades-old theory of deterrence through strategic ambiguity, and so as not to provide adversaries with a potential playbook for possible attacks.

“Part of our deterrence is also not to speculate publicly on what kind of response, in what kind of situation, they would get,” said Kasja Ollongren, defence minister of the Netherlands, when asked about Macron’s statements.

“The president of France speaks for France and for himself. I think that our choice is . . . to condemn [Putin’s nuclear rhetoric], keep our calm and be prepared,” she added. “I would not comment on different possibilities and say ‘yes’ or ‘no’.”

Nato officials declined to comment on Macron’s remarks. But speaking privately they said that while a response with conventional weapons to a Russian nuclear attack on Ukraine was most likely, it was alliance policy not to spell out under what exact circumstances nuclear weapons would or would not be used.

France is one of three nuclear-armed Nato members and a critical part of the western deterrence against Russia. Macron’s words were amplified as he spoke ahead of a meeting of Nato defence ministers in Brussels partly dedicated to discussions of the alliance’s nuclear planning.

Speaking on Thursday after those talks, Nato secretary-general Jens Stoltenberg said the alliance would not make any comments on how its members would react to any use of a nuclear weapon.

“We will not go into how exactly we will respond,” Stoltenberg told reporters. “It will have severe consequences if Russia uses any kind of nuclear weapon against Ukraine.”

France does not participate in Nato’s formal nuclear weapons mechanisms, and is not taking part in the alliance’s annual nuclear exercises next week.

The eight-month war in Ukraine is entering a delicate phase, with Russian president Vladimir Putin threatening to use nuclear weapons if Russian territory is attacked.

Russia has suffered a series of military setbacks as a result of Ukrainian counteroffensives, ratcheting up the pressure on Putin and prompting his senior officials to warn that “all available means” would be used, including atomic weapons.

Defence experts in France were also perplexed by Macron’s statements, which differed from how previous French presidents had often sidestepped questions on nuclear doctrine. Some pointed out that the region around Ukraine includes several Nato members with whom France has a mutual defence commitment.

Macron had earlier laid out his views on nuclear doctrine in a 2020 speech that highlighted the role of France’s nuclear deterrent in underpinning European security.

“Our nuclear forces have a deterrent effect in themselves, particularly in Europe,” Macron then said. “They strengthen the security of Europe through their very existence and they have, in this sense, a truly European dimension.”

Asked whether the president’s comments in the TV interview represented a change in policy, an Elysée official said they did not and they did not call into question France’s defence commitments to Nato countries. “Nuclear deterrence is the prerogative of the head of state and his appreciation in a given moment of what is necessary to preserve our vital interests,” the person said.

Bruno Tertrais, a military expert who co-authored a book on French presidents and the bomb, said Macron was within his rights as commander-in-chief to speak about nuclear doctrine, but questioned the wisdom of doing so.

“I imagine he wanted to reassure the French public, which is understandably worried,” he told Le Figaro newspaper. “Deterrence is a subtle art that must mix clarity with subtlety. The president pushed the cursor very far — too far in my view — towards clarity.”

Denial of responsibility! TechiLive.in is an automatic aggregator around the global media. All the content are available free on Internet. We have just arranged it in one platform for educational purpose only. In each content, the hyperlink to the primary source is specified. All trademarks belong to their rightful owners, all materials to their authors. If you are the owner of the content and do not want us to publish your materials on our website, please contact us by email – [email protected]. The content will be deleted within 24 hours.
business newsBusiness updateCriticisedMacronnews updatenuclearoutliningStance
Share

How To Unlock The Golden Ticket In Apex Legends