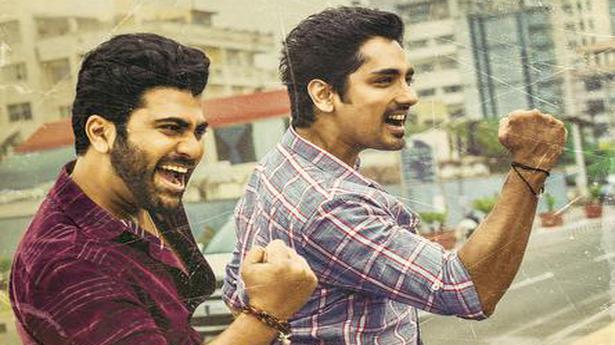 Maha Samudram is director Ajay Bhupathi’s ode to the port city of Visakhapatnam; it is also his hat tip to mainstream cinema. His second outing, after RX-100, has the grand sweep and a few edgy characters that wear their shades of grey with elan. It is a story of romance, friendship, betrayal and redemption, led by talented actors such as Sharwanand, Siddharth, Aditi Rao Hydari, Jagapati Babu and Rao Ramesh. But ultimately, what was intended to be a soaring saga falls short.

In the 1970s, Arjun (Sharwanand) and Vijay (Siddharth) could have been the quintessential Jai and Veeru of Sholay — thick as thieves and taking on the big, bad Gabbar. In the mushy 1990s, they could have been Vineet and Abbas of Prema Desam pining for the same woman. In 2021, the friends needed to be more multi-dimensional and Ajay has attempted that by showing us the possible areas of friction early on.

As the camaraderie between Arjun and Vijay plays out against the sun-kissed landscape (Raj Thota’s cinematography captures Vizag in all its glory) to Chaitan Bharadwaj’s peppy friendship song, Ajay tempers it with the presence of Chunchu uncle (Jagapati Babu). Chunchu hints at a sore past that daunts Vijay and perhaps shapes him the way he is. We will never know, because this angle is underexplored, save for an exchange of dialogues in the pre-climax portions. What we get is a self-centred Vijay whose intention to become a police officer doesn’t stem from idealistic notions.

He deceptively appears to be the calmer one among the two friends, showing his true self only to Maha (Aditi Rao Hydari), who is blinded by love. In this open drama kind of narrative, we can guess what is happening way before the characters do. But it is also a predictable tale. We can guess the beats of the relationship and know who will step up to restore some semblance of sanity.

The early portions focus a tad more on Vijay, before the narrative gradually reveals Arjun. Both Arjun and Maha are characters who don’t hold much of a surprise, and their quiet strength calls for actors who can deliver the emotional beats with earnestness. Sharwanand comes into his own as the story progresses and makes us empathise with and root for Arjun. Aditi lends credibility to the naïve Maha, bringing in a mix of innocence, vulnerability and strength. Each time she hands out her hard-earned money to someone, you want her to stop, for the recipient is undeserving of it.

Parallel to the bromance and the romance, Ajay Bhupathi shows another facet of the port city, which eventually takes centre stage, as do Chunchu uncle and Babji (Rao Ramesh). These talented actors make their parts appear a lot more interesting than the way they have been written. Remove the curious gait given to Rao Ramesh’s character and he would be a typical mainstream villain. Jagapati Babu’s character gets an edge in a few crucial moments, but it doesn’t feel enough.

In fact, the biggest issue with Maha Samudram is that despite its grand intent, it never feels enough. The whistle-worthy masala moments are few and far between and the story doesn’t suck us into the whirlwind of proceedings completely. We get plenty of lines about the mighty, mysterious sea that has many secrets. Only a few of them have the desired impact.

The film also feels stretched with characters that aren’t fleshed out enough. Siddharth’s character and its backstory had a lot more potential than what we ultimately see on screen. The actor tries to portray the turmoil required for his part, but doesn’t get enough to chew on. He revels in what he gets and breaks that lover boy image he previously earned in Telugu cinema, once and for all.

Among the things to appreciate in this film is the ever-reliable Saranya. She can play the warm mother character with the bat of an eyelid and make it endearing.

At the other end, there’s Anu Emmanuel who is saddled with a character that doesn’t go beyond acting cute. It’s the most underwritten part of the film.

Also, it is high time filmmakers think of closure to a relationship without having to move someone out of the way. A deserving person should stand a chance to win, even if a competitor is around. Maybe in a mainstream Telugu film, that will have to wait another decade.

Denial of responsibility! TechiLive.in is an automatic aggregator around the global media. All the content are available free on Internet. We have just arranged it in one platform for educational purpose only. In each content, the hyperlink to the primary source is specified. All trademarks belong to their rightful owners, all materials to their authors. If you are the owner of the content and do not want us to publish your materials on our website, please contact us by email – [email protected]. The content will be deleted within 24 hours.
Aditi Rao HydariAnu Emmanueldoesntdramaentertainment newsEntertainment updateMahaMaha Samudram
0
Share

At Belmont, Students Express Fears on Twitter | Inside Higher Ed