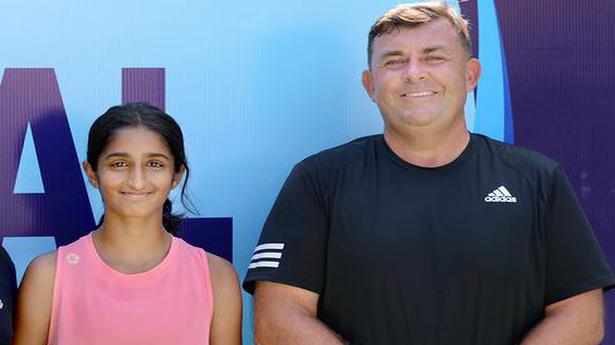 Mahika thrives on the guidance from Clark

A week before the national championship, Mahika Khanna felt homesick and returned to Shahjahanpur from the Accelerate Academy in Gurugram.

“I was at the Academy from May and really wanted to be home,” said Mahika, who dropped one set on way to the under-14 title, defying her wafer thin frame.

Three months before the national championship, coach Todd Clark, who has done a lot of good work with Indian players over the years, had told Mahika that she had the potential to win the national title.

“When I played the first under-18 tournament, he told me that if I worked on my second serve, I would win the title. I did!,” beamed Mahika, quite relaxed after her first round victory in the ongoing national under-18 championship.

Introduced to the game by her sports loving father Gagan Khanna who has played cricket big time, Mahika had tried many academies over the years.

“In our place there was only one court and no players. So, I had to go to Bareilly, about 80 km from home, to learn the game. Even now, my school is Alma Mater in Bareilly. They support me a lot,” said Mahika, capturing the essence of her journey so far.

It calls for some vision to put a rank outsider as a favourite for the national title, but Todd Clark has great clarity in his coaching.

“We have a ladder system in training. We have groups of different levels of players. There are regular matches. If a higher-level player loses to a lower-level player, they exchange their places in the groups. Initially, I used to cry after losing, and felt bad about being in the lowest group. But it motivated me to train better. Now, I like the system a lot,” said Mahika.

The coach places his faith on Mahika because of her being a superb competitor. “The win in the pre-quarterfinals against Priyanka Rana gave me a lot of confidence. I had lost to her twice earlier,” said Mahika, who dropped the only set in the tournament to her.

“After winning the under-14 title, there was no time for celebration. I had to quickly go to court No.11 and play my qualifying match for under-18,” recalled Mahika.

There was some pressure on Mahika as her father had left all his business to take care of her tennis. “Now I am more confident. I play free without thinking about anything,” said Mahika.

Denial of responsibility! TechiLive.in is an automatic aggregator around the global media. All the content are available free on Internet. We have just arranged it in one platform for educational purpose only. In each content, the hyperlink to the primary source is specified. All trademarks belong to their rightful owners, all materials to their authors. If you are the owner of the content and do not want us to publish your materials on our website, please contact us by email – [email protected]. The content will be deleted within 24 hours.
ClarkGuidanceMahikaMahika Khannanews updatesports newssports updatetechi live
Share

The Secrets of Pizza Perfection

Is AES Corp. a Good Utilities Stock to Own? By StockNews