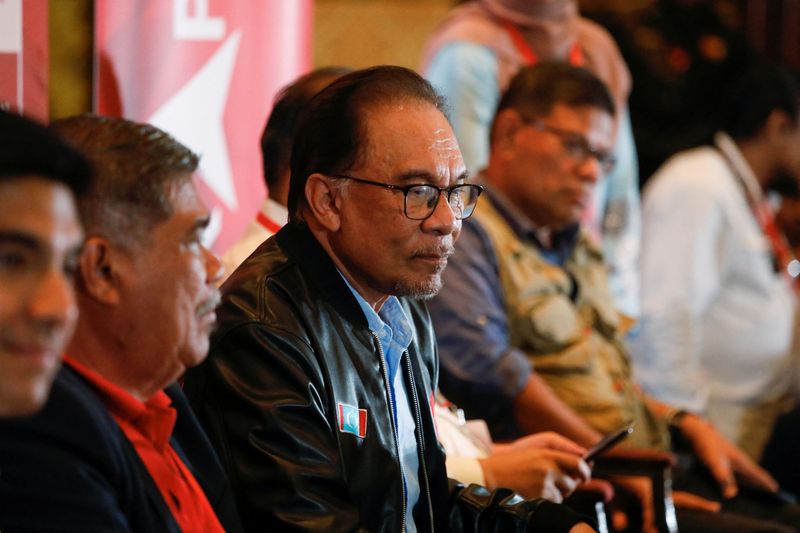 KUALA LUMPUR (Reuters) -Malaysia’s former premier Muhyiddin Yassin secured backing from two political blocs on Sunday as he sought to form a new government after a general election produced a hung parliament, but he had yet to win the required majority.

Muhyiddin, of the Perikatan Nasional coalition, said he had won support from two regional blocs based in the island of Borneo. That would boost his alliance’s seat tally from 73 to 101 – still short of the required 112 majority.

“I am confident I will obtain enough support from lawmakers that will enable me to be appointed by the king as Prime Minister,” he said, without saying which other parties might back him.

Longtime opposition leader Anwar Ibrahim, whose Pakatan Harapan coalition won the most number of seats in the election with 82, is also racing to win support from other groups.

It prolongs political uncertainty in the Southeast Asian nation, which has seen three prime ministers in as many years, at a time of slowing economic growth and rising inflation.

The instability reflects a transformation in a country that has been one of the most stable for decades in a region that has had its share of military coups, violent political upheavals, and insurgencies.

Gabungan Parti Sarawak, one of the Borneo regional blocs, said it was willing to work with Muhyiddin and the incumbent Barisan alliance to form a government.

Forming a government may require the involvement of Malaysia’s king, whose largely ceremonial role includes the power to appoint as prime minister a lawmaker he believes will command a majority.

On Sunday, the palace instructed the parties to each present the name of a lawmaker it thinks has majority by 2 p.m. (0600 GMT) on Monday.

A record number of Malaysians voted on Saturday, and they rejected Ismail’s multi-ethnic Barisan coalition, led by the United Malays National Organisation (UMNO) which has long been the country’s dominant political force.

Race and religion are divisive issues in Malaysia, where the mostly Muslim Malays are the majority of the population, with sizable ethnic Chinese and Indian minorities.

A key winner in the election was the Islamist PAS party in Muhyiddin’s Perikatan grouping, securing the largest number of seats of any single party.

“I think what we learned here is that the country is more divided,” said Asrul Hadi Abdullah Sani, deputy managing director at political risk consultancy BowerGroupAsia.

Mahathir Mohamad, 97 and Malaysia’s longest-serving premier, suffered his first election defeat in 53 years, losing his seat to the Perikatan alliance.

Muhyiddin became prime minister in 2020, but his administration collapsed last year, paving the way for Barisan’s return to power with Ismail at the helm.

If Anwar should become premier, it would be a remarkable transformation for a politician who, in the space of 25 years, has gone from Mahathir’s heir apparent to a prisoner convicted of sodomy and now a leading opposition figure. He denies the sodomy charges, saying they were politically motivated.

Denial of responsibility! TechiLive.in is an automatic aggregator around the global media. All the content are available free on Internet. We have just arranged it in one platform for educational purpose only. In each content, the hyperlink to the primary source is specified. All trademarks belong to their rightful owners, all materials to their authors. If you are the owner of the content and do not want us to publish your materials on our website, please contact us by email – [email protected]. The content will be deleted within 24 hours.
backingbidbusiness newsBusiness updateelectiongainsindecisiveMalaysias
Share

Perenara ruptures achilles, out for 9 months

Chris Hemsworth to take break from acting, learns he is at increased risk of developing Alzheimer’s