Notice: amp_is_available was called incorrectly. `amp_is_available()` (or `amp_is_request()`, formerly `is_amp_endpoint()`) was called too early and so it will not work properly. WordPress is currently doing the `pre_get_posts` hook. Calling this function before the `wp` action means it will not have access to `WP_Query` and the queried object to determine if it is an AMP response, thus neither the `amp_skip_post()` filter nor the AMP enabled toggle will be considered. It appears the theme with slug `publisher` is responsible; please contact the author. Please see Debugging in WordPress for more information. (This message was added in version 2.0.0.) in /home/runcloud/webapps/techilive/wp-includes/functions.php on line 5313
 Manchester City Gets One Step Closer to Its Ultimate Purpose - TechiLive.in 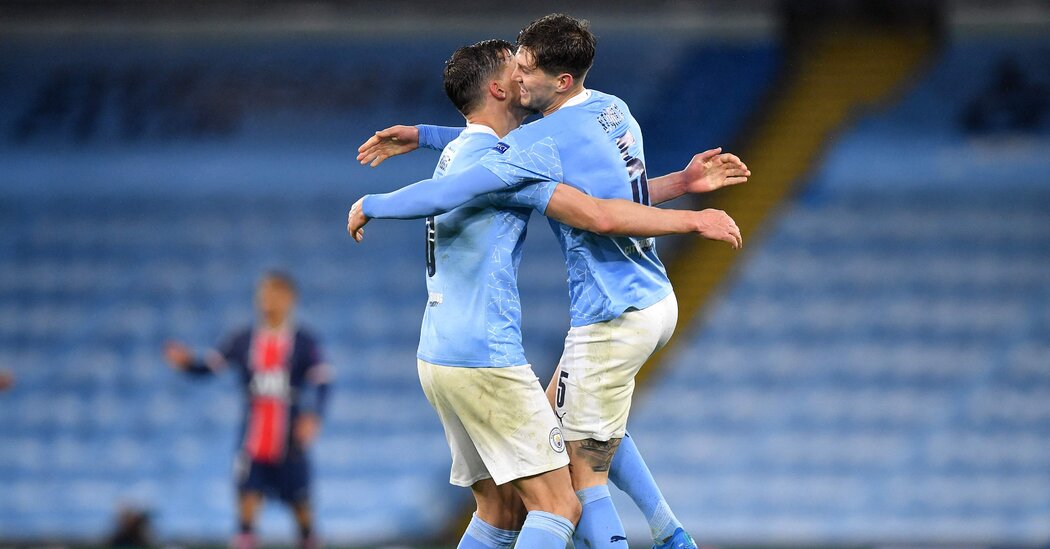 Manchester City Gets One Step Closer to Its Ultimate Purpose

MANCHESTER, England — In those last few minutes, even with the game sealed and a place in the final secure, Manchester City’s staff members and substitutes could not sit still. They pulsed with energy. They roared at every poor challenge. They demanded action from the referee for every transgression. They cheered every completed pass.

As the clock ticked into injury time, they fretted and fidgeted when Paris St.-Germain won a free kick within sight of Éderson’s goal. They cheered when it sailed over. The voice of Mark Sertori, the club’s longstanding masseur, bellowed out across the empty Etihad Stadium. “No chances,” he shouted. There were no more than 30 seconds left, and P.S.G. needed to score three times.

To the rational brain, there was nothing to worry about. Two goals from Riyad Mahrez had long since put the outcome beyond doubt. The distant prospect of a P.S.G. revival had evaporated entirely when Ángel Di María, its Argentine wing, had kicked out at Fernandinho and duly been sent off. City had been home and dry ever since.

But the rational brain goes quiet when the stakes are quite so high. For all that City has achieved in the past 13 years, as it has been transformed from hardscrabble makeweights to the pre-eminent force in English soccer, soon to be winners of three of the past four Premier League titles, and five of the past 10, the Champions League has become something of an open sore.

Like P.S.G., City was built, at considerable expense, to win the Champions League. Not in the sense that it is the game’s final frontier, a team’s greatest ambition. It is that for City — this iteration of City, anyway — this competition is the ultimate purpose.

It is why Pep Guardiola, the standout coach of his generation, was hired; it is why the people who hired him — his former colleagues at Barcelona, Txiki Begiristain and Ferran Soriano — were hired. It is why he has been granted the chance to gather a squad that meets every single one of his demands at a training facility built to enable him to work in absolute serenity.

Soccer does not, of course, work according to a formula, no matter how much money and expertise go into its construction. They have learned that at City the hard way.

The long slog of the Premier League has proved easy to master in comparison with the chimera of the Champions League. There is, as Guardiola said, “something in the stars” in this competition, and it is hard to disagree: He has spent most of the past 10 years in charge of either a powerhouse Bayern Munich team or a Manchester City side of the most exquisite brilliance, yet this will be his first appearance in the final of this tournament since 2011.

The disappointments have been startling in their variety, compelling in their unpredictability. Under Guardiola, City has been caught cold by a youthful and unheralded Monaco, and then blown apart by a surging and hungry Liverpool. It has had its heart broken by Tottenham and its brain frazzled by Lyon.

And now, after a decade of trying, it has shattered that ceiling. What this game means for soccer is a question that — for all that the fans of both City and P.S.G. will resent its being asked — the sport must continue to contemplate.

This, after all, involved two teams backed by the untrammeled wealth of Gulf States competing for a place in soccer’s most glamorous, most exclusive club competition. It should not be controversial to suggest that the motives behind their current primacy are not uniquely sporting.

This may have been the first time they have met on a stage quite this grand, but the simple economics at play — particularly in the aftermath of the pandemic — suggest it will not be the last. They have spent their money differently, P.S.G. on individuals and City on the broader squad, but they have spent it in sums that few, if any, of their rivals can match.

But while the geopolitics and the morality and the broader ramifications matter, they do not matter — not in the moment — to the players and the staff who have been tasked with carrying Manchester City to the place where it wants to be. That is not the story they are part of, not to them.

Instead, theirs is a story of personal ambition and childhood dreams and professional satisfaction, of seeing decades of dedication rewarded not by a lucrative contract or a high-profile transfer but by the long-anticipated chance to reach what is, in almost every sense, the pinnacle of their careers.

That is why, a few minutes before the end, Kevin De Bruyne trooped from the field, his face flushed and his body heaving, and slumped into a chair. He, almost alone, did not spend the final few minutes bellowing and barking and chivying and chiding: There was not a drop of energy left in his body.

He had spent it all chasing down P.S.G.’s defenders as they tried to play their way out of Manchester City’s relentless, lupine press, and haring back to snuff out danger on the rare occasions that Neymar threatened to pick a way through. He seemed, at one point, to lose his cool just a little, reacting to P.S.G.’s provocations, unable to resist the temptation to meet fire with fire. He had been cautioned already; he may have been removed for his own benefit.

When the final whistle blew, he walked gingerly to the field, his legs heavy. His teammates were embracing in front of him. Guardiola’s coaching staff had arranged themselves in a line to greet every single player as they came off the field. Rúben Dias was shirtless in the bitter cold of what is in theory spring in Manchester, howling in the face of whomever he could find.

Manchester City has waited more than a decade for this: the culmination of a project, the realization of a plan. Guardiola has waited 10 years to get back to the final of the competition that he, for one, cherishes more than any other. His players, though, have waited far longer. They have waited their entire lives, in fact, for this one shot. And that, in that moment, is what it meant.

Denial of responsibility! TechiLive.in is an automatic aggregator around the global media. All the content are available free on Internet. We have just arranged it in one platform for educational purpose only. In each content, the hyperlink to the primary source is specified. All trademarks belong to their rightful owners, all materials to their authors. If you are the owner of the content and do not want us to publish your materials on our website, please contact us by email – admin@techilive.in. The content will be deleted within 24 hours.
Loading...
CitycloserManchesternews updatePurposesports newssports updateStep
0
Share