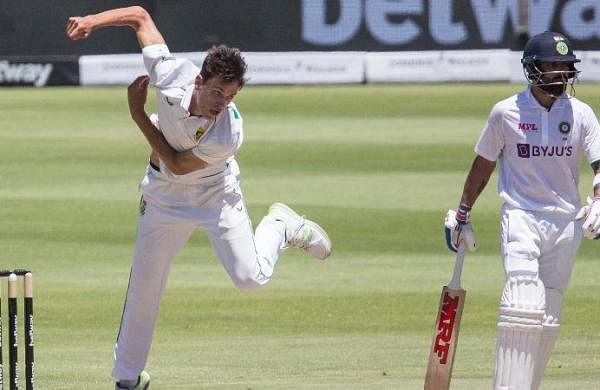 CHENNAI: Right from Alan Davidson to Shaheen Afridi, left-arm fast bowlers have enthralled fans the world over and have troubled the best of batsmen. They are a rare breed and play an important role in the fortunes of their respective teams.

Speaking of their impact, one remembers Brian Lara during an exclusive chat with this daily who had said that he found Wasim Akram the most difficult bowler to face at the peak of his prowess.

Keeping the left-arm fast bowling tradition alive is South Africa’s latest pace machine Marco Jansen.
All of 21 years, Jansen who got an opportunity to play against India, thanks to his performance for South Africa A against India A has been a revelation with his penetrative bowling.

Tall, athletic with a fast bowler’s attitude, Jansen has taken 19 wickets so far (including in the ongoing Test) in the series and has impressed one and all with his bowling.

“Marco Jansen gave a good account of himself. He has looked impressive so far. Left-arm fast bowlers have always an advantage as the angle, arc, pace, bounce and carry that they extract is difficult to pick for many a batsman. Jansen has been hitting the deck in the right areas so far and has also been putting his height to effective use,” observed former India medium pacer and CSK bowling coach L Balaji.

Playing a left-arm speedster calls for sound technique and most importantly, adjustments in stance and feet movement.

The likes of Sunil Gavaskar, Rahul Dravid and Sachin Tendulkar put their experience to effective use, made subtle adjustments to their technique and enjoyed success against the likes of Wasim Akram.

Likewise, Virat Kohli too made some adjustments in his technique and was successful at Cape Town in the first essay and made 79. But in the second innings, after a laboured 29 off 143 balls, perished once again fishing outside the off stump.

“To play a left-arm seamer you need to make some adjustments to your game so as to take on the angle and lengths. Kohli in the first innings played Jansen well and thus made a good score. He (Kohli) played with a slightly more open stance and thus was successful,” pointed out the former Tamil Nadu captain.

But the majority of the Indian batters have not been that successful against Jansen. One of the reasons why the Indian batters failed to play to their potential is that they have no practice against left-arm seamers. With T Natarajan yet to recover from injury, there is no one to bowl to the Indian top order in the nets.

“You need to practice a lot when you have to negotiate left-arm seamers. With no net bowlers and not many left-arm fast bowlers in domestic cricket, our batters are short of quality practice. If you see the likes of the fab five be it Sehwag, Sachin, Dravid, Ganguly and Laxman they all played the likes of Wasim Akram, Chaminda Vaas, Mitchell Johnson well because they had the benefit of good practice from a very good crop of quality left-arm fast bowlers like Zaheer Khan, Ashish Nehra, RP Singh and Irfan Pathan. Playing them in the nets and domestic circuit helped them prepare better for the likes of Akram and Johnson,” opined Balaji.

Former India medium pacer and bowling coach B Arun rues that the fact that there are not that many quality left-arm medium pacers like we had in the past. He believes that having a left-right pace combo in the attack is always beneficial to the team.

“I have not seen much of Jansen so I cannot comment on his bowling. Unfortunately, Natarajan is injured. It will be great if we have a couple of left-arm fast bowlers in our attack for it will lend variety. That is the only thing we need to add to our attack which is otherwise very good,” said Arun.

With two new teams in the IPL and the auction to be held shortly, players from South Africa will be in demand as they have always done well for the various franchises. So Jansen can look forward to a good deal.

“Not just Jansen, any fast bowler will be in demand in the IPL. You need guys to bowl well in the power play and death in the shortest format of the game. Jansen has shown promise but it is too early to judge how good he will be by just seeing one series. We have to see how he adapts and bowls in different conditions and wickets,” opined Balaji.

Denial of responsibility! TechiLive.in is an automatic aggregator around the global media. All the content are available free on Internet. We have just arranged it in one platform for educational purpose only. In each content, the hyperlink to the primary source is specified. All trademarks belong to their rightful owners, all materials to their authors. If you are the owner of the content and do not want us to publish your materials on our website, please contact us by email – [email protected]. The content will be deleted within 24 hours.
AfricaBharat ArundearthformIndia vs South Africa Test SeriesIndiasJansensL Balaji
Share