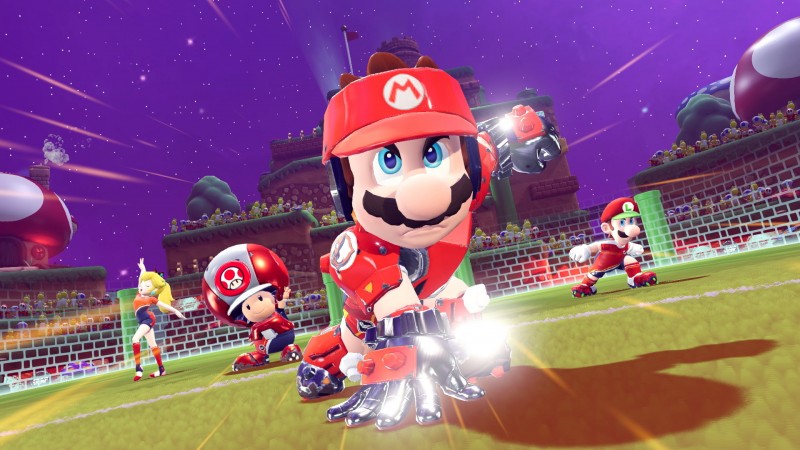 The Switch has been a prosperous era for fans hoping for follow-ups to their cult-classic favorites from several generations ago. Just last year, we got New Pokémon Snap, a sequel to one of Pokémon’s most beloved spin-offs more than two decades after the fact. Now, 2022 brings us Mario Strikers: Battle League. Announced in February during this year’s first Nintendo Direct, Mario Strikers: Battle League is the first entry in Nintendo’s arcade-style soccer series since 2007’s Mario Strikers Charged on Wii. While Nintendo gave us some tidbits of information on what to expect through Battle League’s initial reveal, Nintendo really pulled back the curtain today through a new overview trailer, which you can see below.

As with all the Mario-centric sports games, you control a group of Nintendo favorites in a modified version of one of our favorite pastimes. While the Mushroom Kingdom’s versions of golf and tennis can be a little off-the-wall, just wait until you see Mario’s version of soccer. It’s so extreme that Nintendo doesn’t even call it soccer; instead, the sport depicted in the game is called strike. In Mario Strikers: Battle League, players can play locally or online with up to eight players. Once in a game, the goal is simple: score more goals than the other team. However, through an extremely modified and admittedly loose ruleset, that’s easier said than done.

Using Team Tackle, you can help a teammate cover a lot of distance fast… or you can live up to its namesake and take out opponents. Additionally, if you pick up a Stirke Orb, you can use a Hyper Strike to score two points. The game has no fouls, so anything goes, meaning you need to equip the best gear to protect yourself during matches. Each piece of gear offers stat-boosting perks that vary between characters, like faster speed, better shooting, or making them stronger at resisting incoming tackles. You can also discover a signature Striker Style for each individual character.

If you want to play individual matches, you can certainly do that, but it sounds like a lot of Mario Strikers: Battle League’s longevity comes through its Strikers Club mode. Here, you create or join a team of up to 20 total players, then compete against other clubs online. Each match earns you points to help you climb higher in the rankings each season. The club owners can customize their team’s uniforms and will earn tokens, which can be used to customize their home stadium including the goals and field design.

Mario Strikers: Battle League comes to Switch on June 10. If you can’t wait nearly a month to get your Nintendo sports fill on your Switch, check out our reviews of Mario Tennis: Aces, Mario Golf: Super Rush, and Nintendo Switch Sports.

Denial of responsibility! TechiLive.in is an automatic aggregator around the global media. All the content are available free on Internet. We have just arranged it in one platform for educational purpose only. In each content, the hyperlink to the primary source is specified. All trademarks belong to their rightful owners, all materials to their authors. If you are the owner of the content and do not want us to publish your materials on our website, please contact us by email – [email protected]. The content will be deleted within 24 hours.
agmeupdatebattleDisplayFeaturesGames newsgamingGaming updateLeague
Share