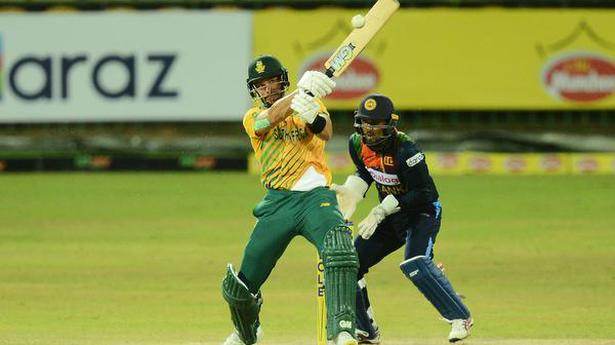 Aiden Markram hit 48 off 33 balls to propel South Africa to a 28-run win over Sri Lanka in their T20 opener.

South Africa won the toss and elected to bat first in the three-match series. The visitors made 163-5 before restricting Sri Lanka to 135-6.

However, Markram and David Miller (26 off 15) rebuilt the innings, sharing 65 runs for the fourth wicket off 35 deliveries. Markram hit one four and two sixes in his innings.

Avishka Fernando and Dinesh Chandimal gave the home team a modest start with a 34-run opening partnership before Fernando (11) was run out in the sixth over.

In the next over Bhanuka Rajapaksa was out to the first ball, trapped lbw by left arm spin bowler and captain Keshav Maharaj. Charith Asalanka (6 off 19) tried to increase the scoring rate and was caught in the deep by Dwaine Pretorius off left arm wrist spinner Tabraiz Shamsi.

Chandimal remained not out for his career-best 66. His 54-ball innings included five fours and two sixes.

Maharaj took 1-19 in four overs in his first T20I, claiming the wicket with his first delivery.

Shamsi, Pretorius, Bjorn Fortuin and Anrich Nortje all took a wicket each.

The second T20 is on Sunday.

Denial of responsibility! TechiLive.in is an automatic aggregator around the global media. All the content are available free on Internet. We have just arranged it in one platform for educational purpose only. In each content, the hyperlink to the primary source is specified. All trademarks belong to their rightful owners, all materials to their authors. If you are the owner of the content and do not want us to publish your materials on our website, please contact us by email – [email protected]. The content will be deleted within 24 hours.
AfricaAiden MarkramBeatscareer best scorecolombocricket newscricket news livecricket results
Share

Your Daily Horoscope for Saturday, September 11

The lockdown epiphany that wasn’t