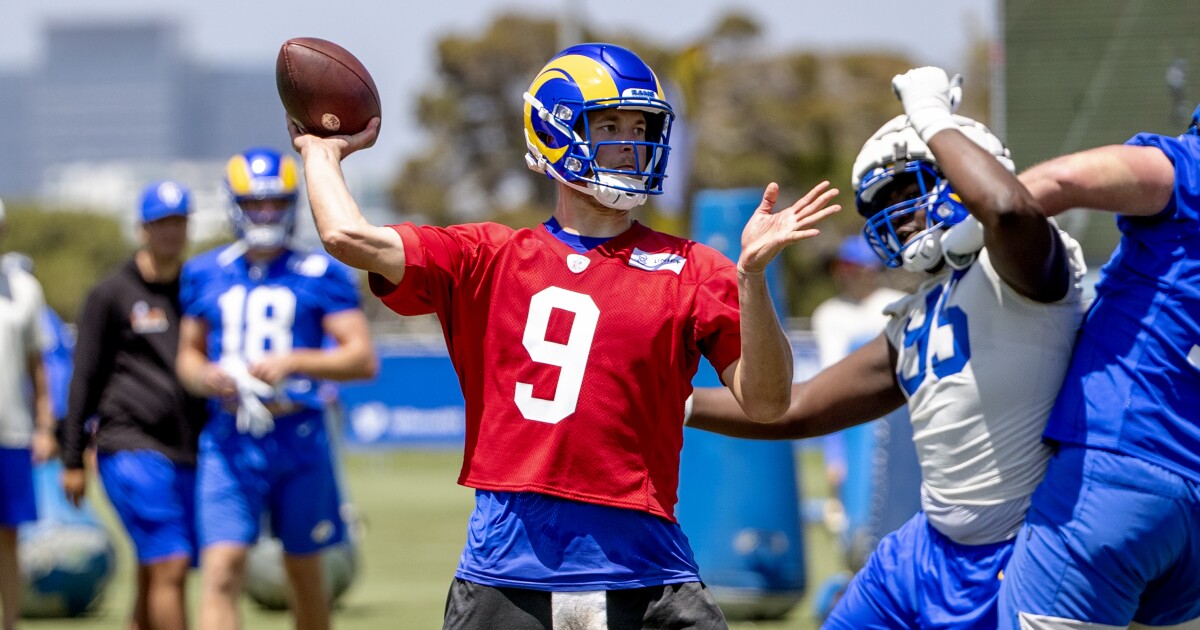 Matthew Stafford, and an elbow issue that has plagued him since last season, will be tested again Tuesday when the Rams scrimmage for the first time.

The Rams’ veteran quarterback and other starters and key players will not play in preseason games, so the scrimmage in Thousand Oaks should provide the Rams with another marker as Stafford plays through tendonitis while preparing for the Sept. 8 opener against the Buffalo Bills at SoFi Stadium.

“We’re going to really ramp him up,” McVay said, “and so he’s going to go back-to-back days.”

Stafford will be tested again next week when the Rams travel to Cincinnati for two joint practices with the Bengals before the final preseason game.

Stafford has played through numerous injuries during his 13-year NFL career. But the Rams have been proceeding with caution — and concern — as they attempt to become the first team to repeat as Super Bowl champion since 2004.

The condition of Stafford’s arm has been an issue since last season, when he passed for 41 touchdowns and led the Rams to a victory over the Bengals in Super Bowl LVI at SoFi Stadium.

Stafford, the recipient of an extension that includes $120 million in guarantees, had an injection in his elbow after the season and did not throw passes during offseason workouts and minicamp. He threw passes — and looked to be in midseason form — at the start of training camp at UC Irvine. His workload was reduced during the latter part of camp, but he did participate in full-team drills on the final day last week.

McVay has described Stafford’s issue as “abnormal for a quarterback.”

Stafford has said he was “not too worried about what it’s called or whether its abnormal,” and that his focus was on progress and improvement.

Stafford is not the only starter working through injury.

Running backs Cam Akers and Darrell Henderson did not practice Monday because of what McVay described as “soft-tissue” injuries. Neither Akers nor Henderson, both of whom went through agility drills with trainers, are scheduled to play in a game until the opener. Their status for the joint practices with the Bengals will be determined next week.

“We want them to be able to return to performance, where it can be full speed,” McVay said of Akers and Henderson. “It’s not like its 50%. We need to be able to go at running back.”

Akers sat out nearly all of last season because of an Achilles tendon injury. He returned for the season finale and played in the playoffs and Super Bowl. But Akers said he was not satisfied with his performance, and that he was looking forward to demonstrating skills that McVay had planned to showcase in 2021.

Henderson’s durability was an issue in each of his first three seasons.

Defensive tackle Bobby Brown suffered an ankle sprain in the Rams’ 29-22 preseason victory over the Chargers and will be sidelined for a few weeks, McVay said.

Brown is suspended for the first six games for violating the NFL’s performance-enhancing substance policy. Players typically are forbidden to be on site while serving suspensions, but if Brown is still rehabilitating his injury when the season begins, McVay said he would be able to receive treatment from team medical personnel on site.

Denial of responsibility! TechiLive.in is an automatic aggregator around the global media. All the content are available free on Internet. We have just arranged it in one platform for educational purpose only. In each content, the hyperlink to the primary source is specified. All trademarks belong to their rightful owners, all materials to their authors. If you are the owner of the content and do not want us to publish your materials on our website, please contact us by email – [email protected]. The content will be deleted within 24 hours.
60snapelbowfaceMatthewnews updateRamsscrimmagesports news
Share

Xbox Series X Not Recognizing Discs? Here’s How To Fix It

Everyone thought Ravindra Jadeja’s absence would…

LOST opened to a great response at the Chicago South-Asian…