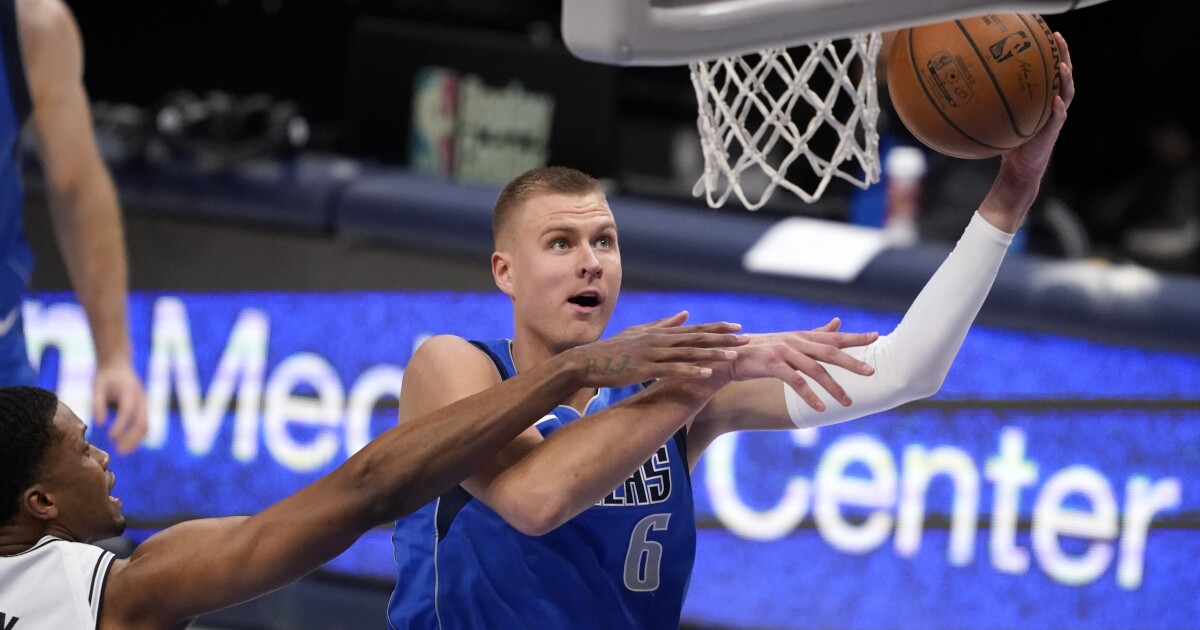 While he was writing the children’s book, “B is for Baller,” James Littlejohn chose to incorporate some of basketball’s most enduring superstars to help explain the alphabet, and the game itself.

He chose a dunking Michael Jordan (“A is for air”), a Grateful Dead-inspired Bill Walton (“J is for jam”) and Wilt Chamberlain (“O is for one hundred”).

But Littlejohn, who grew up in the Bay Area a Warriors fan, also wanted a younger generation represented. For the last page, he asked the book’s illustrator to draw Giannis Antetokounmpo, Anthony Davis and Kristaps Porzingis, a trio of up-and-coming stars whose blend of 7-foot size, shooting and skill embodied the modern NBA.

Nicknamed a “unicorn” by Kevin Durant because of a guard’s skillset and center’s body, Porzingis is pictured with a horn emerging from his forehead and a tail from his shorts.

“I wanted to think of who were a few players who could be future superstars,” Littlejohn said.

Antetokounmpo and Davis have become capital-S superstars since the book’s 2018 release: Antetokounmpo is the league’s two-time most valuable player with Milwaukee, Davis is an NBA champion with the Lakers and both are again centerpieces of their respective teams’ title pursuits.

But when the NBA playoffs begin Saturday with the fourth-seeded Clippers’ Game 1 against fifth-seeded Dallas at Staples Center, a rematch of their first-round meeting last season, it is Porzingis whose career has yet to have its indelible breakthrough moment. One year after the Mavericks’ 7-foot-3, one-time All-Star’s first postseason was cut short by an injured right knee, his difficult-to-predict influence can best be defined by X, for X-factor.

“He’s only 25, right? So he could still end up being a multiple time All-Star and all-time great,” Littlejohn said. “He could also be a guy who just made that one All-Star team, and he’s kind of hobbled by injuries and he’s, like, just good his whole career.”

The Clippers are aiming to deny Porzingis the playoff coming-out-party that he appeared on his way to reaching last August while playing, at times, like the second star Dallas envisioned alongside guard Luka Doncic. Porzingis averaged 23.7 points. 8.7 rebounds and 52% three-point shooting in his playoff debut before a torn lateral meniscus sidelined him the final three games of a six-game Clippers series victory.

Watching while unable to help was “one of the worst feelings I’ve had, honestly,” Porzingis said this week.

He didn’t play again until January. In 43 games this season, he averaged 20.1 points and 8.9 rebounds while shooting 37% from three and a career-high 53% inside the arc. After missing 10 of the last 14 games because of an ankle injury and soreness in his right knee, Porzingis averaged 19.3 points over his last three games while making nine of his 15 three-pointers, a stretch that Mavericks coach Rick Carlisle called “pretty indicative of his importance to our team” during a radio interview.

“He had a great game against New Orleans, he was really good against Toronto, and we didn’t play well as a team against Minnesota a couple nights ago, but he shot the ball well,” Carlisle said. “I’m looking at how he’s moving and how he’s getting into his stance and that kind of stuff, and we see good signs.”

The second postseason appearance for Porzingis and Doncic will be their first with fans in attendance, a factor that Carlisle has said shouldn’t be overlooked. Staples Center has sold out its pandemic-restricted capacity just shy of 7,000 seats for Game 1, according to the Clippers. Cardboard cutouts will fill remaining seats. Mavericks owner Mark Cuban has said he is hopeful as many as 15,000 fans will be in attendance when the series moves to Dallas.

For Porzingis, there is nothing unfamiliar about the experience of playing under watchful eyes and heightened expectations. Drafted fourth overall in 2016 by the Knicks, his progress was followed closely under twin spotlights cast by fans in New York and abroad, where he became only the third Latvian to reach the NBA. He remains a celebrity at home, whose performances can conjure a certain amount of national pride, said Juris Bunkis, a Newport Beach plastic surgeon who has served as Latvia’s honorary consul in California since 2011.

“Obviously he has a very wide following amongst the Latvian community, which is very, very small worldwide,” Bunkis said. “There are only 2 million people in Latvia and maybe 200,000 in the rest of the world that are Latvian. But when Kristaps comes to town, it’s very common to have local Latvians go to the stadium with flags or with signs.”

The Clippers arrive with their eyes on Porzingis, too. In Marcus Morris, Kawhi Leonard and center Ivica Zubac, the Clippers return Porzingis’ three primary defenders from last season’s playoffs; Porzingis was minus-25 in the 81 minutes he shared the court with Morris and minus-15 in the 59 minutes he overlapped with Zubac. He was plus-18 in his 13 minutes while Morris sat and plus-8 in 35 minutes when Zubac wasn’t on the floor.

He added that “we are a dangerous team, we truly believe that. We have outside shooting. We have everything we need. We have the tools, we just don’t have the experience yet.”

Given a chance to update the final page of his basketball alphabet, Littlejohn said he’d probably do more than just update the Pelicans uniform Davis was wearing in 2018. He’d now include Doncic alongside Davis and Antetokounmpo as the torch-carriers of the NBA’s future.

Porzingis, too, cannot rewrite last season’s ending. But facing the Clippers again, he has another chance to fully display his lofty potential and add a new chapter in his career. In the vocabulary of the modern NBA, all it takes is four Ws.

Denial of responsibility! TechiLive.in is an automatic aggregator around the global media. All the content are available free on Internet. We have just arranged it in one platform for educational purpose only. In each content, the hyperlink to the primary source is specified. All trademarks belong to their rightful owners, all materials to their authors. If you are the owner of the content and do not want us to publish your materials on our website, please contact us by email – [email protected]. The content will be deleted within 24 hours.
AimingClippersdenyKristapsmavericksnews updatePorzingissports news
0
Share

Game developers seem to subsidize other apps: Judge to Apple in Epic case