Notice: amp_is_available was called incorrectly. `amp_is_available()` (or `amp_is_request()`, formerly `is_amp_endpoint()`) was called too early and so it will not work properly. WordPress is currently doing the `pre_get_posts` hook. Calling this function before the `wp` action means it will not have access to `WP_Query` and the queried object to determine if it is an AMP response, thus neither the `amp_skip_post()` filter nor the AMP enabled toggle will be considered. It appears the theme with slug `publisher` is responsible; please contact the author. Please see Debugging in WordPress for more information. (This message was added in version 2.0.0.) in /home/runcloud/webapps/techilive/wp-includes/functions.php on line 5313
 Mavericks star Luka Doncic questionable to play Game 4 vs. Clippers - TechiLive.in 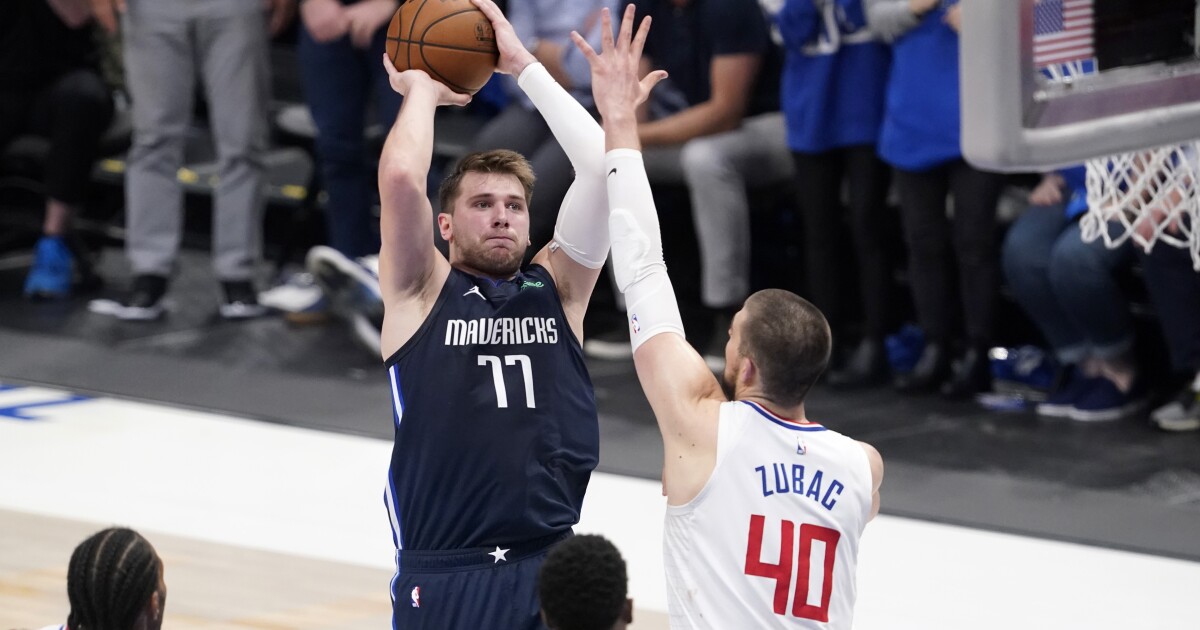 After complaining late Friday about pain in his neck and left arm, Dallas star Luka Doncic is questionable to play Sunday in Game 4 of this first-round series against the Clippers because of a cervical strain, according to the team.

The injury could make it tougher to top what was already a historic Game 3 performance by the third-year Slovenian All-Star.

Not since Dirk Nowitzki in 2011 had a Dallas Maverick scored as many playoff points as Doncic’s 44. That explosion was fine by the Clippers, because for the first time all series their defense kept Doncic’s teammates in check, a result that led to a 118-108 win Friday at American Airlines Center and sets up Sunday’s Game 4 in which the Clippers hope that formula will repeat itself.

“[Doncic] has the ball in his hands 90% of the game, and he’s going to make every play,” Clippers coach Tyronn Lue said. “He’s going to make everybody better. We want to try to make him a scorer and try to take the other guys out. We’ve still got to do a better job with that, but I thought last game was a step forward.”

After trailing 2-0 in the best-of-seven series, Clippers stars Kawhi Leonard and Paul George helped lead discussions about bouncing back for the third game, Lue said, and the main topic, according to Leonard, was getting stops like the kind that won them their first game. Dallas scored only three fastbreak points and was outscored 46-24 in the paint. The Nuggets also missed six free throws.

“That was the number one thing,” Leonard said. “It was our defense. We got to play better defense. … Being down 2-0, still being down, keeping our composure and having faith in ourselves pretty much. But like I said, that was it. We needed to get stops. We need stops.”

The improvement, to Leonard, was “basically mental effort, paying attention to detail, that’s it.”

“This is playoff basketball and you’re playing against some of the greatest talent in the world, and you have to have attention to detail,” he said.

After Lue changed his lineup for Game 3, inserting Reggie Jackson for starting guard Patrick Beverley, the Clippers’ starters were outscored by 11 points in four minutes against the Mavericks’ starting five. Lue said Saturday that he will use the same starters Sunday.

Lue said he did not know whether Serge Ibaka would be available to play after he sat out Game 3 because of back spasms, an injury that has kept the backup center in Los Angeles.

Unlike Dallas, however, there seemed to be no concern about the health of the Clippers’ leading scorer. Asked how he felt after playing 40 or more minutes in three consecutive games, Leonard said he would be fine.

“It’s playoff basketball,” he said after Game 3. “My mind isn’t tired. I’m in good shape. So you know, got to do whatever it takes at this point.”

Loading...
Denial of responsibility! TechiLive.in is an automatic aggregator around the global media. All the content are available free on Internet. We have just arranged it in one platform for educational purpose only. In each content, the hyperlink to the primary source is specified. All trademarks belong to their rightful owners, all materials to their authors. If you are the owner of the content and do not want us to publish your materials on our website, please contact us by email – admin@techilive.in. The content will be deleted within 24 hours.
ClippersDoncicgameLukamavericksnews updatePlayQuestionable
0
Share