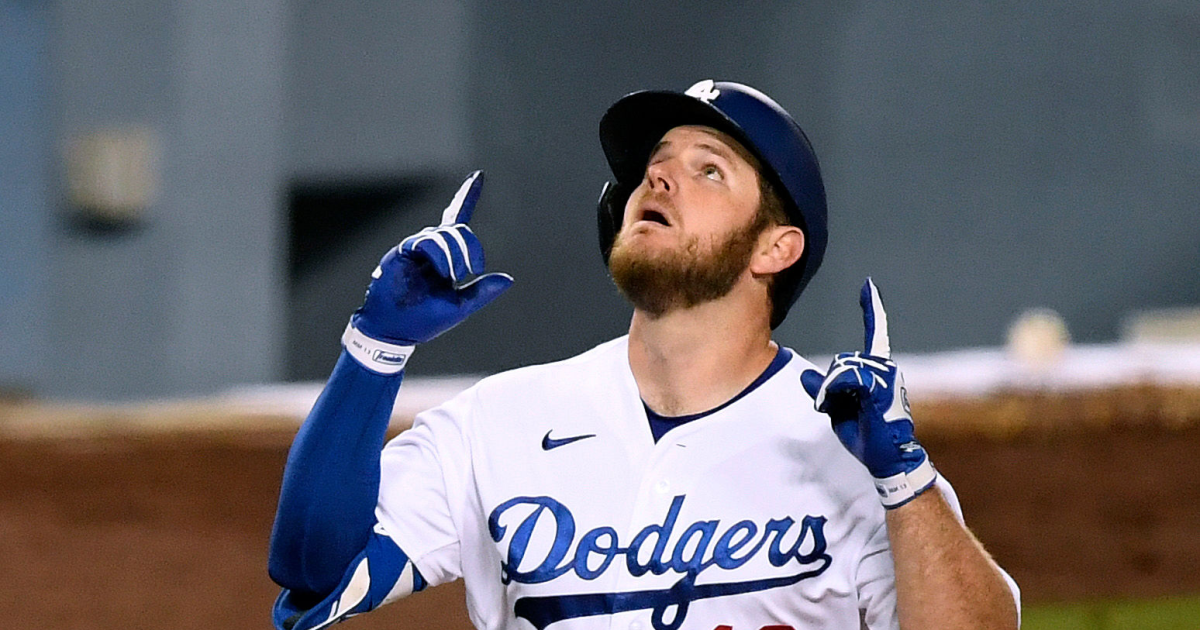 The last time Max Muncy faced Alex Wood in Chavez Ravine, the Dodgers infielder walked away with a broken left ring finger, an injury that contributed to a brutal start to 2020 in which Muncy hit .169 with five RBIs in his first 20 games.

Facing each other in an intrasquad game last July, Muncy, struggling to pick up the ball in the new batter’s eye of a renovated stadium, was hit in the hand by a pitch from the former Dodgers left-hander.

The two squared off again Thursday night when Wood took the mound for the Giants in the first of a four-game series between the National League West rivals.

The rematch was a lot more gratifying for Muncy, who crushed a tiebreaking homer to right-center field in the sixth inning to lift the Dodgers to a 4-3 victory over the Giants before a reduced-capacity crowd of 16,343.

Giants second baseman Donovan Solano had tied the game 3-3 in the top of the sixth when he followed Mike Yastrzemski’s bunt single with a 360-foot homer over the short wall in left, the first homer Dodgers reliever Victor González has given up in 36 career big-league appearances. Muncy, leading off the bottom of the sixth, punished a 92-mph 0-and-2 fastball that Wood left up in the zone, sending a 108.6-mph drive 420 feet into the right-field pavilion for his 11th homer of the season and eighth homer this month.

“I don’t know if there were any flashbacks [to summer camp], but it was definitely in my head, and there was definitely some intent behind every swing tonight,” Muncy said. “I was looking for a pitch up in the zone, and he finally made a mistake. He’d been making good pitches all night, so it felt really good.”

Justin Turner followed a Mookie Betts triple with a two-run homer in the third inning, and DJ Peters, the former Glendora High star, hit his first big-league homer, a solo shot to center in the fifth, as the Dodgers won for the 13th time in 15 games.

The Dodgers have employed a four-man rotation — with the help of four sturdy starters, four off days and three bullpen games — for the entire month after Dustin May suffered a season-ending elbow injury on May 1, and they turned to their relief corps again Thursday night.

Starter David Price couldn’t have set a better tone, retiring all eight batters he faced, five by strikeout, and notching the 2,000th whiff of his career when he blew a 95-mph fastball by Curt Casali in the third.

“That was very special, for couple reasons,” said Price, a former Vanderbilt star. “It was against one of my very good friends, Curt Casali, who swings the bat well against me, and he’s a Vandy guy. Second, it’s my wife’s birthday today, so it’s special to be able to pitch on her birthday and reach a milestone.”

The veteran left-hander threw 35 pitches, 27 for strikes, and hit 95 mph eight times, showing he is fully recovered from the wrist injury that hampered his 2019 season with the Red Sox.

Price, who opted out of the 2020 season, was praised for his willingness to accept a relief role in spring training, but he has spent virtually all of his 13-year career as a starter, winning the 2012 American League Cy Young Award with Tampa Bay.

It would make sense for the Dodgers to stretch out Price and add him to the rotation, but the team has resisted that idea, choosing instead to wait for Tony Gonsolin to finish his minor league rehabilitation stint and take the fifth rotation spot in early June.

“I think right now, we love where David is at, taking down one-plus inning, having him be more relevant in more games,” manager Dave Roberts said. “I think you could argue that building him up and getting him on a regular routine might be more beneficial.

“But I think David is of the mind, and we’re of the mind, that where he’s at, pitching in short bursts, impacting more games, is better for him and for the Dodgers in 2021.”

“Starting is something that is a little more natural to me, but I enjoy being in the bullpen as well,” Price said. “Having a chance to pitch back to back days, three out of four, that’s a lot fun. Whatever they want me to do, I’m all for it. Just continue to take the ball whenever my number is called.”

Loading...
Denial of responsibility! TechiLive.in is an automatic aggregator around the global media. All the content are available free on Internet. We have just arranged it in one platform for educational purpose only. In each content, the hyperlink to the primary source is specified. All trademarks belong to their rightful owners, all materials to their authors. If you are the owner of the content and do not want us to publish your materials on our website, please contact us by email – [email protected]. The content will be deleted within 24 hours.
AlexDodgersGiantsliftMaxMuncynews updatesports news
0
Share

Driving in the snow is a team effort for AI sensors