Notice: amp_is_available was called incorrectly. `amp_is_available()` (or `amp_is_request()`, formerly `is_amp_endpoint()`) was called too early and so it will not work properly. WordPress is currently doing the `pre_get_posts` hook. Calling this function before the `wp` action means it will not have access to `WP_Query` and the queried object to determine if it is an AMP response, thus neither the `amp_skip_post()` filter nor the AMP enabled toggle will be considered. It appears the theme with slug `publisher` is responsible; please contact the author. Please see Debugging in WordPress for more information. (This message was added in version 2.0.0.) in /home/runcloud/webapps/techilive/wp-includes/functions.php on line 5313
 Meet the People Who Make New York City’s Summer Hustle Happen - TechiLive.in 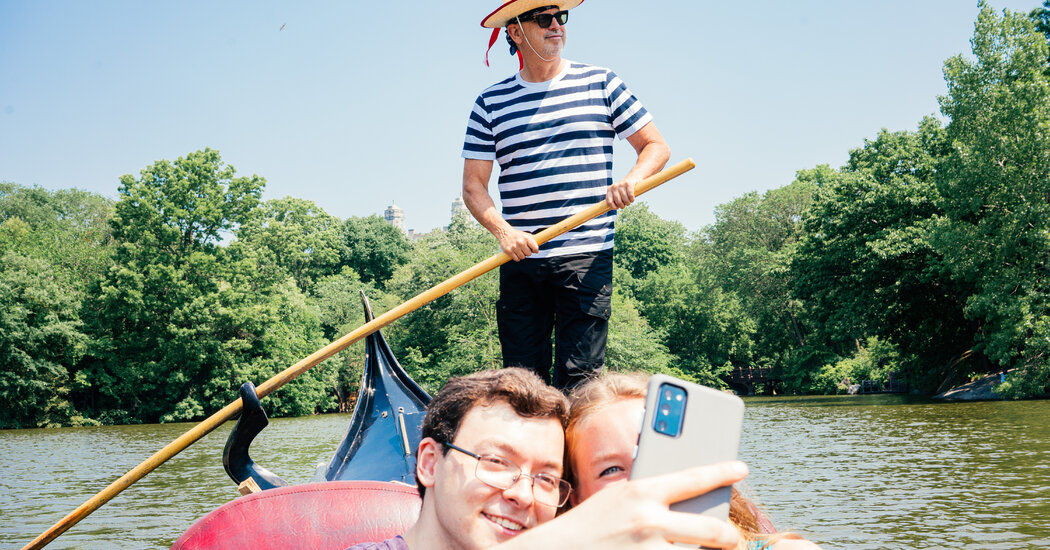 Like the merciful cracking-open of a fire hydrant on a scalding day, summer promises to be that long-awaited relief for New York. Vaccines are here, many masks are off and there is a growing sense among some — though not all — that the city’s inching back to normal.

And to many New Yorkers, the hot pavement and once-again-packed beaches mean the return of something else: the summer hustle.

It is the season for New York’s boldest entrepreneurs. They hawk illicit cocktails on the beach, offer bouquets to motorists in chaotic city traffic and blow big bubbles at children in the parks for tips.

Come summer, they seem to pop up everywhere: the Dominican food trucks parked outside the city pool in Highbridge Park in Washington Heights; the ice cream vendors dragging heavy coolers through the sand at Coney Island; the Delicioso Coco Helado cart propped on a Bronx street corner.

It is a stark contrast to last summer, when the sought-after items were gloves, masks and hand sanitizer to fight a pandemic that killed more than 30,000 New Yorkers.

The pandemic devastated the city’s economy, closing thousands of businesses and eliminating hundreds of thousands of jobs. Last summer less than one-quarter of the city’s typical 17 million summer visitors showed up, according to NYC & Company, the city’s tourism promotion agency. This summer, their forecast is better, with an estimated 10 million visitors expected.

The hustlers’ degree of success could be a modest bellwether indicating how quickly the city’s more established small businesses, and the city’s economy overall, might rebound from last year’s downturn, which saw one-third of the approximately 230,000 small businesses in the city close or become endangered, said Mark Gjonaj, a city councilman from the Bronx who chairs the Council’s committee on small business.

Natali Palaquachi, 19, a college student who makes money selling flowers to beach-bound drivers at a Queens intersection, said business has picked up because everyone has been home, and now they’re restless.

“When Memorial Day comes, everyone starts coming out, going to barbecues and spending time outside having fun,” Ms. Palaquachi said while hawking $20 bouquets of roses, carnations and lilies to cars waiting at a traffic light near the Belt Parkway, bound for the Rockaways and Coney Island.

Truly magical soap bubbles need to be big enough to surround a child, who stands delighted in their center, mesmerized until the soapy halo pops.

Social distancing made that impossible for Edmond Leary, known as Uncle Bubbles in Madison Square Park, where he has long wrapped children in soap bubbles and taught them how to make supersized ones themselves on summer afternoons. Last summer, his typical earnings of about $250 a day in tips dwindled to $45.

“You could see the sadness on the kids’ faces,” he said. “They really want to come over and join the fun.”

Mr. Leary, 55, put his bubble sticks and buckets of dishwasher detergent away for the past year, he said, living at a Y.M.C.A. in Harlem off royalties from his previous career in music. But a few weeks ago, he got his first vaccine shot, loaded up his hand wagon with bubble supplies and headed to the park.

“It’s very exciting to be able to get back out there and bring some love to the city,” he said. “It’s the excitement of seeing the bubble rise; when they see the bubble, it’s like hope.”

‘Nutcrackers, get your nutcrackers!’

With nightspots shut and bars closed, business boomed during the pandemic lockdown for a 28-year old man who sells cocktails he mixes at home, known as nutcrackers. “People were just bored, and housebound, and could do nothing besides drink,” said the nutcracker seller, from Flatbush, Brooklyn, who asked not to be named because his summer hustle is not legal.

The brightly hued cocktails are typically sold on street corners, but with social distancing, he felt uncomfortable approaching people, he said. Instead, he introduced contactless delivery and used the time to expand his range to 21 flavors, including the popular swirl of Hennessy cognac and coconut called the Henny Colada. He also partnered with pop-up restaurants, he said, to sell liquor at events. “That was a little light in the dark tunnel of the pandemic,” he said.

With the final Covid restaurant restriction — a midnight curfew on bars — having been lifted over Memorial Day weekend, his competition is fully back.

But this month his primary market, basketball tournaments, returns, and he’s spent the past weeks mixing and bottling flavors in his apartment, confident that when he hits the streets again, nutcracker customers will be there too.

And when those crowds take to the outdoors, he said, he’ll be there — with a nutcracker to sell them.

Slicing mangos and carving out a living

Sliced mango, drenched in drenched in lime juice and red chili powder, is a Mexican delicacy that has become a New York City summer staple. Drawn by the sunshine and increasing foot traffic, a woman from Ecuador decided to join the fruit hustle last month.

“There’s no work now,” said Maria, a former factory worker who was laid off last year, as she sliced fruit near Times Square. She asked that her full name not be used because she does not have papers to legally work in America. “So we have come out to the streets to sell fruit so we have a little something to eat,” she said.

She spent last summer at home with her family in the Bronx, she said, ineligible for federal stimulus money. Two weeks ago, she decided to join the ranks of mangueras, the Spanish term she used for the mango sellers. Corners with lots of pedestrian traffic like hers are coveted, she said: “There is a lot of competition between mangueras.” Sales have gone up with the temperature. “It has improved a little,” she said, “thank God.”

But after buying ingredients as well as plastic bags, food service gloves, plastic forks, napkins and a MetroCard, even with more tourists and New Yorkers out doors, she takes home about $50 a day or less, she said.

For 27 years, Andrés García-Peña, 59, has paddled canoodling couples in a Venice-style gondola on Central Park Lake. He has rowed and sung (in Italian) for the likes of Barbra Streisand, Spike Lee and Bruce Willis, he said, but usually caters to foreign tourists.

He operates out of the Boathouse restaurant, which charges $50 for 30 minutes. Mr. García-Peña gets half, in addition to tips.

Last summer, the gondola was closed, but when he returned to work in April, tourists were scant and his schedule was instead filled with New Yorkers.

“The first weekend, people were just throwing money at me,” he said “New Yorkers are all itching to go out.”

For Simon Chardiet, 62, a musician and surfer who lives near the Rockaway Beach boardwalk, the summer has meant a return to his beach bum business model: pulling out his longboard and upright bass and giving surfing and music lessons, as well as busking on the boardwalk.

During much of the pandemic, he gave music lessons online, “but now people are starting to come back out into the real world, and I don’t have stare into a computer screen,” said Mr. Chardiet, whose lessons start at $100.

He lost several friends to Covid-19, he said. This summer he is organizing a memorial concert. “I can’t let them go without some way of remembering them.”

Slips for sailing away

“I’m the busiest I’ve ever been,” said Charlie Evers, 78, who has been working 12-hour days, seven days a week, using a crane and his miniature tugboat, to fill his 200 docking slips at Evers Marina in the Bronx, between Pelham Bay Park and the Throgs Neck Bridge.

“People saw it as a way to get some fresh air and a way to get away from it all,” he said. But in the fall, when rates began rising again, many customers abandoned their boats.

“I chopped up 16 boats because people just left them in the water and didn’t pay their bill,” he said.

Kim Zatto, 55, a bait seller, delivers eels, worms, crabs and killifish in her aging minivan to bait shops in Queens and Long Island, many of which she has had as customers since her teenage years.

Her father, Larry Seaman, 77, catches much of her product. Bay workers who live in modest houses on a creek alongside Kennedy International Airport, the family has been catching bait in Jamaica Bay for generations.

“But this is going to be a big summer,” Ms. Zatto said. “A lot of people have been cooped up, and now they want to go out and fish and they want their worms.”

With a bag of squid strips fetching $3 and bass eels going for $8 a pound, hers is a volume business.

“I’ll never get rich doing this,” she said.

Delicioso Coco Helado is back

Delicioso Coco Helado, with its 22 flavors of rainbow-swirled icy treats, was born in the Bronx more than four decades ago. The arrival of the 150 or so men and women who sell the frosty goodies from pushcarts when the weather warms up has long signified the unofficial kickoff of summer.

That number dropped by about half last year, according to Sophia Pastora, the company’s president. Now they are once again out in force. “Some have gotten the vaccine. They feel safer,” she said.

Juan Pineda, 48, a Bronx resident who is originally from Honduras, is a career heladero, a city fixture for the past 25 years. Known to customers as Tony, he did not stop during the height of the pandemic, though business declined. “Even the millionaires know me,” he said.

Remote school last year had meant no rush of school children clamoring for ices after the bell, but the last week of May, he was outside the Marymount School of New York on East 84th Street and Fifth Avenue, exchanging colored scoops for bunched-up dollar bills.

For Mr. Pineda, whose favorite flavor is cherry with mango, working through the pandemic was intimidating, but he knows no other way, he said. Somehow, he got by, he said, as he doled out another scoop.

Denial of responsibility! TechiLive.in is an automatic aggregator around the global media. All the content are available free on Internet. We have just arranged it in one platform for educational purpose only. In each content, the hyperlink to the primary source is specified. All trademarks belong to their rightful owners, all materials to their authors. If you are the owner of the content and do not want us to publish your materials on our website, please contact us by email – admin@techilive.in. The content will be deleted within 24 hours.
Loading...
CitysEducation newsEducation updatehappenhustleMeetnews updatePeople
0
Share