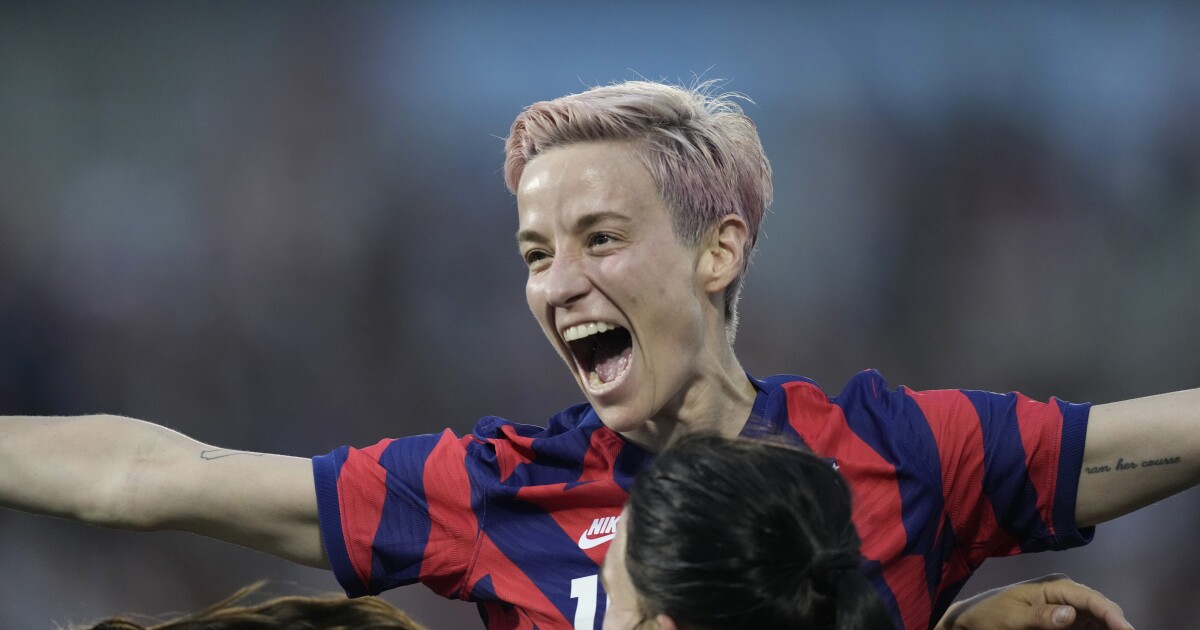 Megan Rapinoe was having lunch with the rest of the women’s national soccer team when her cellphone buzzed. It was the White House, the caller ID said.

Rapinoe chuckled at what she assumed was a prank before showing the phone to teammate Kelley O’Hara.

“You probably need to pick that up,” O’Hara advised.

It might have been the most important assist of O’Hara’s career because when Rapinoe answered after a couple of more rings, the voice at the other end asked her to “please hold for the president of the United States.”

Rapinoe had been chosen to receive the Presidential Medal of Freedom, the nation’s highest civilian honor, becoming the first soccer player and sixth female athlete to be a recipient. Although Rapinoe’s accomplishments on the field have little to do with her receiving an award that recognizes “exemplary contributions to the prosperity, values, or security of the United States, world peace, or other significant societal, public or private endeavors.”

There were other players in the cafeteria that day who have played more games and scored more goals. There are former teammates who have won more championships.

Yet none of those women can match Rapinoe’s accomplishments off the field, where she knelt against racism and stood for LGBTQ rights. She has campaigned against gender discrimination and in favor of equal pay, using both the court of public opinion and the court of law.

She even joined her teammates in suing their boss, the U.S. Soccer Federation, a suit that led to a historic revenue-sharing agreement six weeks ago that will see the men’s and women’s national teams compensated equally.

Standing up and speaking out has never been a problem for Rapinoe. Soccer is what she does, but it isn’t who she is.

“It’s literally the point of life to be able to walk in your truth and be who you are,” she said. “I just see this [award] as a validation of all the things that I’ve stood for, not a validation of me.

“My playing career has given me the opportunity to talk about all of these things that really, truly do matter. It’s about validating this push for equality and rights and freedoms for everyone.”

An Olympic gold medalist and two-time World Cup champion, Rapinoe will be focusing on her sport Monday when the U.S. begins play in the CONCACAF W Championship in Monterrey, Mexico, against Haiti. She will miss her team’s second game with Jamaica to travel to the White House for Thursday’s medal of freedom ceremony before returning for the group-play finale next week with Mexico.

The eight-team competition will determine the region’s qualifiers for both the 2023 World Cup and 2024 Paris Olympics. For Rapinoe, who turns 37 on Tuesday, the tournament will likely mark the beginning of the end of her international career. A surprise inclusion on this summer’s roster, she has said she’d like to play in one more World Cup but has said little about her plans beyond that.

Being in the right place at the right time, however, has been a hallmark of her 16-year career.

Once a traditional midfielder, Rapinoe became a winger following the retirement of Abby Wambach in 2015 and flourished, setting career highs for goals twice in the last four years, capturing the Golden Boot and Golden Ball trophies at the last World Cup and winning both the FIFA World Player of the Year trophy and the Ballon d’Or in 2019.

Timing has also played big part in Rapinoe’s activism since her emergence as one of the best players on one of the most dominant teams in global sports has taken place as the nation she represents struggles with societal issues such as gay rights, racism, gender equality, white supremacy and abortion.

Many of those causes needed an outspoken champion, and Rapinoe filled that void.

“I knew that it was sort of my calling or my path,” she said. “I was exactly where I was supposed to be. Whenever you walk in your truth like that, whenever you show up for the right things, I think good things happen.”

Using that platform to rally support for social justice has been a tradition with the national team dating to its origins with Mia Hamm and Julie Foudy. When Rapinoe got her call from the president, she was quick to credit the team for the honor, a nod that brought captain Becky Sauerbrunn to tears Sunday.

“It’s pretty on par with Pinoe to get one of the most amazing awards ever and then immediately say it’s a team award,” Sauerbrunn said as she used the sleeve of her warm-up jacket to dab at the tears. “That’s just how she is. This team has always had a legacy of fighting for things off the field to make society better than what it is. And unfortunately, there’s always going to be things that we’re going to be fighting for.

“I’ve known her since I was 15 and she’s always been someone with such a presence and so smart and so open-minded and so open-hearted. She’s just so brave. And I think she’s made everyone around her brave. So the fact that she got this award, yeah, it is a testament to the team. But she’s also such an incredible person.”

On Thursday at the White House, President Biden will give her a medal to prove that.

Denial of responsibility! TechiLive.in is an automatic aggregator around the global media. All the content are available free on Internet. We have just arranged it in one platform for educational purpose only. In each content, the hyperlink to the primary source is specified. All trademarks belong to their rightful owners, all materials to their authors. If you are the owner of the content and do not want us to publish your materials on our website, please contact us by email – [email protected]. The content will be deleted within 24 hours.
HighlightshonorMegannews updatePlayerpresidentialRapinoesrole
Share